Why are some people creative and others are not?

Are you a logical, precise thinker, or would you say that you’re more free-spirited, creative, and artistic? If you’re the former, you are a left-brained person. If you’re the latter, right-brained.

Yes, the left brain is more verbal, analytical, and orderly than the right brain. It is the digital brain. This side of the brain is better at things like reading, writing, and computations. Scientists have extensively studied the processes of thinking in the brain regions that involve creativity. They learned that creativity involves a complex interplay between spontaneous and controlled thinking. In other words, it involves the ability to spontaneously brainstorm and deliberately evaluate and reckon their viability.

Creativity is the ability to come up with new and useful ideas. It’s not just your ability to draw a picture or design a product. We all need to think creatively in our daily lives. Whether it’s figuring out how to make dinner using leftovers or fashioning a costume out of clothes in your closet.

According to the “Four C model of creativity”, creative tasks range from what researchers call “Little-c” creativity to “Big-C”. The little-c talks mostly about making a website, crafting a birthday present, or coming up with funny jokes. And the big creativity deals with writing a speech, composing a poem, or designing a scientific experiment.

How does the brain feel to be creative?

The brain has different lobes or regions that all handle different tasks. You can blame that stupid decision you made as a teenager on your frontal lobe. But creative thought doesn’t have a dedicated area of the brain where those innovative ideas come from. Highly creative people have more nerve connections between the right and left sides of their brains. (The American researchers who analyzed connections in 68 different brain regions revealed this finding.)

In my opinion, as children, we are all naturally creative. However, barriers of school, society, and corporates ‘educate us out of creativity’ by the time we reach adulthood. Running the rat race makes us lose track of what the mind truly desires. Recent research reveals that there are different ‘cognitive styles’ of creative and analytical thinkers. This is due to the fundamental difference in brain activity. It can be observed even when people are not working on a problem.

Positive feelings such as enthusiasm and excitement can encourage people to be more creative. They help expand cognitive flexibility and enhance motivation. However, negative emotions such as worry, anxiety, and frustration can also increase creativity, but through different means. Ever heard of, “Stupendous back to wall recovery”?  If you are wondering how? Well, they help the mind focus and make you more critical, which may result in a better outcome.

The default network is a set of brain regions that activate when people are engaged in spontaneous thinking. For example, mind-wandering, problem-solving, daydreaming and imagining.

The default network is a set of brain regions that activate when people are engaged in spontaneous thinking, such as mind-wandering, problem-solving, daydreaming, and imagining.

When people need to focus or control their thought processes, the executive control network, a set of brain regions, activates

The salience network is a set of regions that acts as a switching mechanism between the default and executive networks. This network may play a key role in alternating between idea generation and idea evaluation.

An interesting feature of these three networks is that they typically don’t get activated at the same time. However, researchers suggest that creative people are better able to co-activate these networks that usually work separately. Creativity requires the coordination of multiple brain regions and different types of thinking. Creativity is complex. To think that it can be localized to a single region in the brain is naive.

For a long time, scientists thought that creativity was processed only in the brain’s right hemisphere (side). However, studies observed the activity in the brain while people were performing creative tasks, or in patients who had brain damage, resulting in difficulty with creativity. It was found that an area called the frontal cortex was associated with creativity.

This seemed to make sense. Because the frontal cortex processes most of the cognitive processes (for example, working memory, abstraction, planning, and cognitive flexibility). Therefore, creativity is more than the simple left versus right brain.

What does this mean?

So now we can say brain scientists have moved us one step closer to understanding the neural mechanisms of creativity, and an important piece of the puzzle is this dual network functionality: the ability to let one’s mind wander and reign it in, making use of both processes at once. 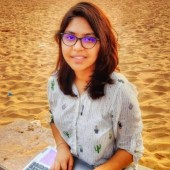 A psychology enthusiast, who loves to let her id lose. Somehow my left brain tingles more with excitement than the right. And this, what many call the dominant hemisphere, admitted my creative writing. With tons of things to take in this whole wide world, this gremlin lil brain of mine is on a path of learning as much as it can. Not only to feed my yearnings but also to share them with you as my untamed musings. I am a content writer for quite some websites and magazines while working on up-skilling myself about the cast of mind.