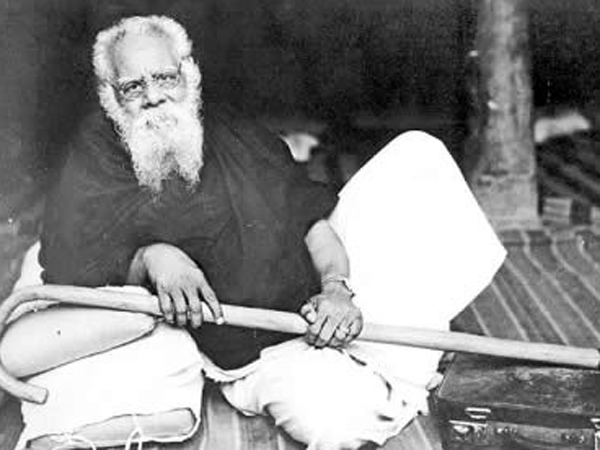 Erode Venkata Ramaswamy or famously known as Periyar, was born to a Kannada Balija merchant family. Since his rudimentary age, he was enchanted with Tamil Vaishnavite gurus who gave discourses in his house. As Periyar grew, he felt that people used religion solely for surreptitious reasons: to deceive innocent people through ostentatious means. He was moved to a point where he took it as one of life’s duties to warn people against superstitions and those who preached them.

In 1904, while on a pilgrimage to Kashi, one particular incident had a profound impact on the ideology of the clandestine upcoming hero. Hungry and indigent, he observed a worship site at a near distance where free meals were offered to the guests. The catch of the nobility was that only Brahmins were eligible for benefiting from the service. Destitute Periyar, then dressed up as a brahmin, tried to enter the premises and was thrown out of the temple after the gatekeeper ensured that his getup was marked by deception and possibly enough, nefarious intentions. This discriminatory attitude dealt a blow to Periyar’s regard for Hinduism.

Once a firm believer of Hinduism, Ramaswamy discarded all the beliefs and decided to walk the path of atheism.
Soon enough, he joined the INC after quitting his business and resigned from public designations. Being an active member of the movement, Periyar was arrested during the Non-Cooperation movement. In 1922, he was elected as the President of the Madras Presidency Congress Committee where he strongly advocated for minority reservation in government jobs and education. Unfortunately enough, his attempts, owing to discrimination and indifference, went in vain; which led to his departure from the party in 1925.

One of the prominent movements, Vaikom Satyagrah of 1924, contributed to the rise of man. A board outside the Vaikom Mahadeva Temple in Kerala announced a prohibition on the entry of lower castes. When Periyar and his wife arrived in Vaikom, they were immediately arrested and imprisoned for participation. This incident led to his claiming of the title Vaikom Veeran. The Self Respect Movement he led promoted weddings without rituals and sanctioned property as well as divorce rights for women. He appealed to people to give up the caste suffix in their names and to not mention it. He also instituted inter-dining with food cooked by Dalits in public conferences. Periyar did not support the compulsory introduction of Hindi in schools that ignited a series of anti-Hindi agitations. Moreover, he considered this decision as an attack on the Dravidian Culture. The slogan “Tamil Nadu for Tamilians” was first used by E.V. Ramaswamy in protest after the same incident. In fact, he advocated the need to retain English as the union official language instead of Hindi.

Despite all the zealous work, he was one of the most controversial figures when alive. Following the death of his first wife, 70-year-old Ramasamy decided to marry a 32-year-old woman Maniammai, who was declared his successor forcing some of his closest associates including CN Annadurai to start the DMK. On one occasion, he referred to the Tamil people as “barbarians” and the Tamil language as the “language of barbarians” because it had no respective feminine verbal forms.

On the 24th day December of 1973, Periyar died at the age of 94.
Despite all this, for an average Tamil, the HERO and Thantai’ (Father) Periyar today is an ideology. He stands for a politics that foregrounded social equality, self-respect, and linguistic pride. A social reformer, he focused on social, cultural, and gender inequalities, and his reform agenda questioned matters of faith, gender, and tradition. His legacy, for many years, questioned and rationalized the lifestyles of his followers.