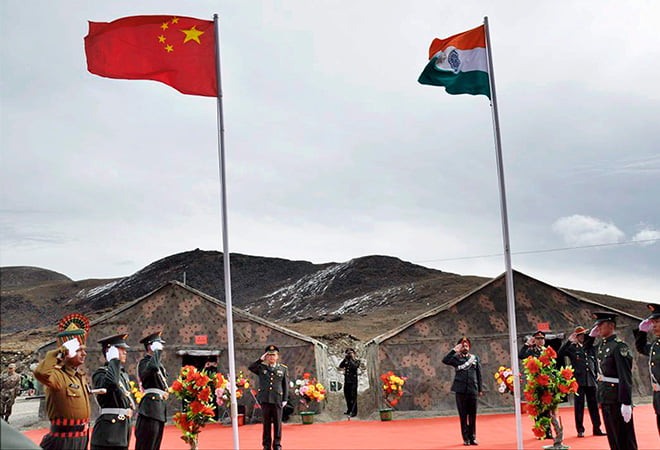 In Ladakh, a surge of 75% in Chinese transgressions has been observed in 2019 compared to 2018 and the first four months of 2020 have also witnessed an increase compared to 2019.
The border between both the countries is not fully demarcated and the Line of Actual Control (LAC) is neither clarified nor confirmed by the two countries. This leads to different perceptions of LAC for both sides. Official data shows that 80% of Chinese transgressions since 2015 have taken place in four locations namely Pangong Tso, Trig Heights and Burtse in Ladakh of the western sector, and Dichu Area/Madan Ridge Area (Arunachal Pradesh) of the western sector.

The dispute in the western sector is over the Aksai Chin, which both countries claim to be a part of their country. The dispute over Aksai Chin can be traced back to the inability of the British Empire to clearly demarcate a legal border between the two nations.
During the British reign, two borders between India and China were proposed. The Johnson’s Line (in 1865) shows Aksai Chin as a part of India while the McDonald’s Line (in 1893) places it in China’s control. Both countries consider the opposing proposals and consider Aksai Chin to be a part of their sovereignty. At present, the LAC is the line separating Indian areas of Ladakh from Aksai Chin.
The eastern borderline is known as McMahon Line which China considers illegal and unacceptable advocating that the Tibetan representatives who had signed the Shimla Convention of 1914 had no right to do so.

India is worried about the strains at Naku La in Sikkim and at Galwan stream and Pangong Tso in Ladakh. Nepal’s ongoing conduct on the Mansarovar Link Road raising the border map issue is additionally a matter of worry for India.

The USA also had offered to mediate between India and China to which both the countries have said that the issue would be resolved bilaterally via diplomatic and military channels. Also in the Wuhan and Mahabalipuram summits, both the nations have affirmed that efforts will be made to ensure peace and tranquility in the border areas. Both nations have settled border issues calmly in the previous four decades which gives an expectation that the pressures will die down soon. Foundation of harmony between two major forces of such a significant geopolitical district is essential for their own development and advancement just as for the upkeep of worldwide harmony as well.