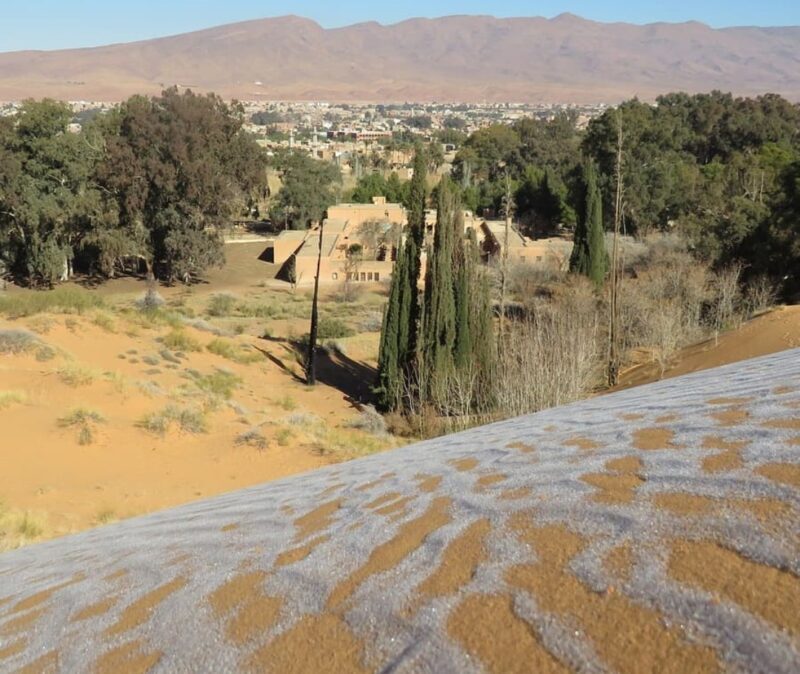 THE HOTTEST PLACE IN THE WORLD – THE SAHARA DESERT IS CURRENTLY EXPERIENCING MASSIVE SNOWFALL IN SOME PARTS, MAKING IT LOOK LIKE A MODERN WONDER.

When we think of travelling to a desert, we imagine Barren sand dunes and almost no vegetation. But what if you get to witness a desert enveloped in snow?

According to Forbes report, this year is the fourth time the dessert has seen snowfall, and only three rare incidents have occurred in the past thirty-seven years in the Sahara desert that covers an area of 3,600,000 square miles, almost the size of united states. The first incident of snowfall in the Sahara desert town of Ain Sefra was recorded in 1979, followed by December 2016 and January 2018 when the desert was reportedly covered with 16 inches of snow. The 2016 snowfall was captured by Landsat 7 satellite on December 19, 2016, while the 2018’s snowfall on January 7 was captured by the same photographer, Bouchetata.

However, a population that is more accustomed towards enduring heat was not quite well equipped to manage the sudden snowfall. As a result, roads, cars and buses were stranded on roads as they became icy.

Meteorologists Jason Nichols stated,” A cold pool of air coupled with precipitation from a surface storm caused sow to fall in the form of rain. The same feature responsible for the snow on the Sahara brought heavy snow to the Alps earlier this week.”

It snowed in the Sahara Desert of Africa resulting in the temperature to dip at -2°C.

The surreal pictures of the snow-laden Sahara desert were filmed by photographer Karim Bouchetata. The serene scenes captured of the desert town of Ain Sefra in Algeria, show snow covering the dry sand dunes of the desert. Ain Sefra is called the gateway of Sahara-desert. It is located 1000m above the sea level and is flanked by the Atlas mountains.

Why Does It Snow In Desert?

It is a known fact that deserts have extreme weather conditions and they are called ‘deserts’ because they are too hot but they are extremely dry. At night, the dry air loses its heat lot quicker than humid air. Now, wind moves clockwise around areas of high pressure in the Northern Hemisphere, pulling down the cold Arctic air. Although the set up is infrequent, but it is not impossible and we can see the live example already. A high-pressure formation in Europe, causes the cold air from the Artic to be pulled down, which makes its way through Southern Europe landing in the Sahara Desert. This, cold air then rises to the elevation Ain Sefra where it causes snowfall. The higher the pressure formation, the farther south the air can travel.