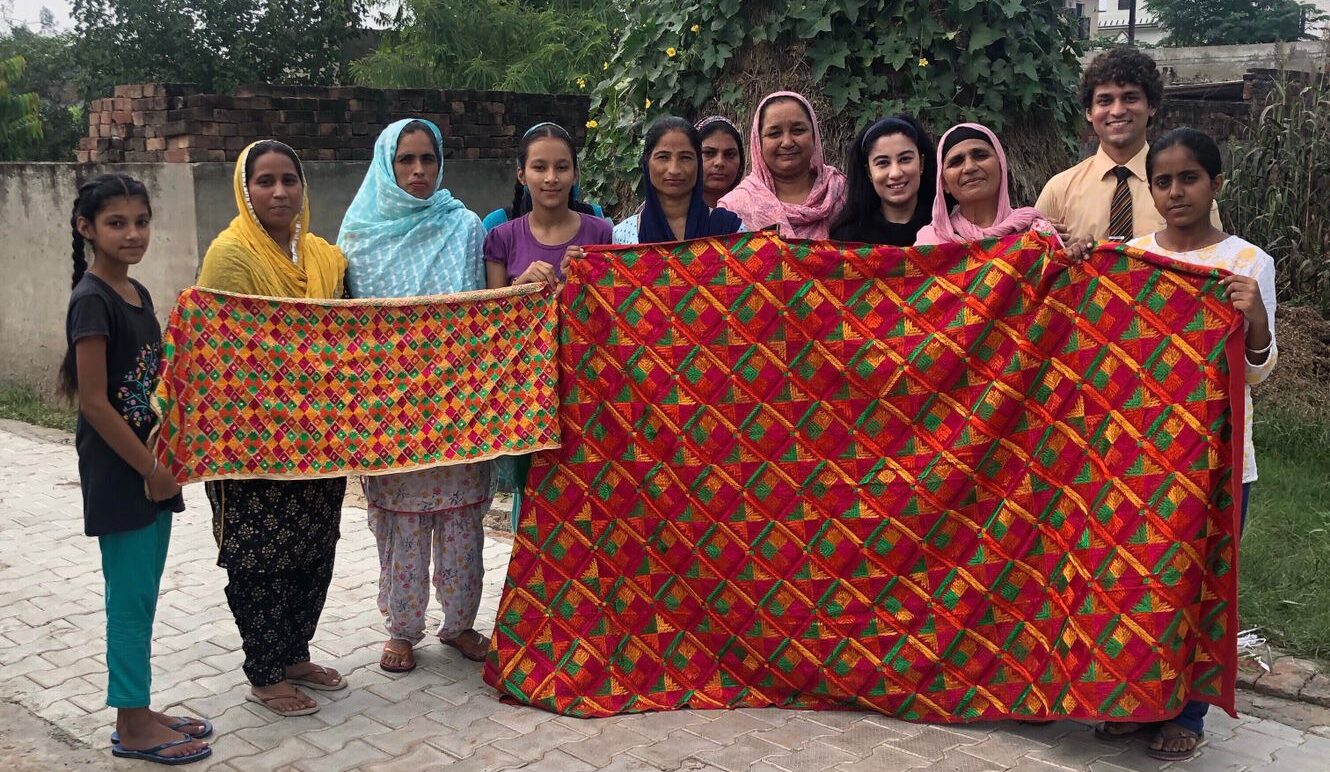 Ambar by MSG is an initiative started by Sukhdev Kaur from a small village in Boor Majra in the Roopnagar district of Punjab. Sukhdev Kaur had to pause her studies back in the day because despite being brilliant she was the only girl in a class of 65 students. But a spirited Sukhdev Kaur was not meant to be a silent spectator in life and she soon after with support from her husband started a project to revive the forgotten art of hand-embroidered phulkari.

Interestingly phulkari started as a means to honour the birth of a girl child in Punjab. The birth of a girl was considered auspicious and Phulkari was the way to honour the creator of future generations. Phulkari the traditional embroidery of Punjab is basically made of the long and short darn stitch. Phul means flower and Akari meaning shape and the play in phulkari thus being the flower motif and then extending up to nature. The advent of machine embroidery and the infiltration of several easy techniques is making this ancient art of hand a rarity in Punjab also which Sukhdev Kaur and her band of dedicated women are changing one exhibition at a time.

Even though the competition with machine-made pieces is tough; MSG refuses to be bowed down and continues their journey supported by younger groups like Crimson, Enactus and now recently Her Adhikaar. MSG has been heavily awarded by Punjab Government and Roopnagar administration and are slowly making a mark on a national and international level for reviving a dying art. Phulkari is an ancient art and was first mentioned in the biography of Raja Harshvardhan-the Harshcharitra in 590cE
And then extensively in Waris Shah’s Heer Ranjha in the 18th century.

Phulkari was one essential item in every Punjabi bride’s trousseau embroidered with hands by her Nani, Dadi, Massi, Chachi, mother and other ladies in the family. MSG is therefore not reviving an art form but a keynote piece of tradition and culture. They have exhibited their rare and unique hand made products at Saras Mela, at Odisha, crafts mela, Vaishali, Ludhiana, Kurukshetra, Benaras and actually many such national fairs and have made a name for themselves at every centre and awarded because of their bespoke products at every national and international level including orders from Geneva. I could go on and on listing the recognitions and awards from the ministry of rural development to Nehru Yuva Sangathan, National youth affairs to Bhagat Singh memorial, unlimited accolades and encouragement has come their way.

MSG (Mata Sahib Kaur SHG) a homegrown initiative is a tribute to the never say die spirit of a woman who in turn with her dedication and creativity wants to keep inspiring and keep alive an ancient tradition. Slowly and steadily more and more women from rural Punjab are joining this unique venture unfazed by patriarchy and domestic hindrances.

Special mention for the spirited team of core members:

And their variations of phulkari from dupattas to Bedsheets to cushion covers to several innovative gifting options.