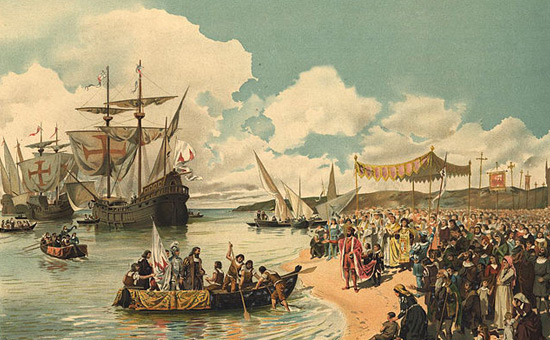 Treaty of Tordesillas was signed in 1494. Tordesillas is a town and municipality in the province of Valladolid, Castile and León, central Spain. In 1497, under this treaty the rulers of Portugal and Spain divided the non-Christian world by an imaginary line in the Atlantic. Portugal could occupy and claim everything to the east of the imaginary line, while Spain could do the same for the other half.

Vasco Da Gama was the first to find the sea route to India. In 1497 Portuguese ships sailed towards India and took almost 11 months before reaching in May 1948. The arrival of the three ships under Vasco Da Gama was led by Abdul Majid (a Gujarati pilot). The ships reached Calicut, modern-day Kozhikode (a city in Kerala). The discovery of the route to India completely changed the course of Indian History.

The Portuguese were the first to settle in India followed by the British, Dutch, Danes and French respectively. The British made their way through appeasement, power, crookedness, and diplomacy, slowly eliminating all the other European powers and becoming a monopoly in the subcontinent, ruling India for a period of more than 200 years.