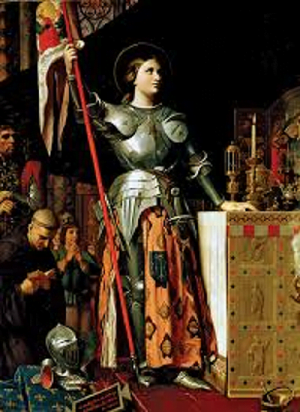 Born around 1412, Joan of Arc was the daughter of a tenant farmer Jacques d’Arc and Isabelle Romée, in a village of northeastern France.

She was of a belief that she was acting under divine guidance, which was led by the French army in a momentous victory at Orléans that repulsed an English attempt to conquer France during the Hundred Years’ War.

At that time, she had qualities that were so strong, as personal piety, direct connections with the saints. She was of a belief that she had a special mission to save France from its enemies. And for that, she knew she had to rightfully install Charles as the king.

She was a woman so determined to save France that she took a vow of chastity when her father tried arranging her marriage. She tried visiting Charles VII the dauphin who was to be crowned the next king but was not crowned even after years of his father’s death because the English king Henry VI had occupied the territory under which the Reims where French kings were traditionally crowned.

She was very confident she would with the help of the Dauphin could bring peace to France. She however met the dauphin and with his permission, chopped her hair and dressed like a man led the army to Orleans that was then seize by the English and was popularly known as the seize of Orleans. She took the victory and as promised to help dauphin become the prince, he was crowned as King Charles VII.

Joan’s victory was spread all over France and she was known to be a popular leader. Though her victory was of a short time as the king ordered her to confront the Burgundians who had stroked on Compiegne a town in northern France.

She got defeated and was held captive by the Burgundians who charged her of many crimes including witchcraft, heresy, and also for dressing like a man. King Charles VII made no attempt to save her due to the charges put on her.

She was kept captive and year after being held in prison, Joan relented and signed a confession denying that she had ever received divine guidance she was also asked to dress like a woman.

After all these charges and captivity, she was at the age of 19 burned at the stake. But after 20 years, Charles VII ordered a new trial where thorough investigation happened which cleared her name and was later known as the patron saint. In 1909 Joan of Arc was beatified in the famous Notre Dame cathedral in Paris by Pope Pius X.

She at such a young age was so determined that she made a name of her own in history which is to be known to us even after ages. Her love for France and focus on her duties were so bold that she came to be known as the ‘Maid of Orleans’. She was a brave and smart woman at an age so young.

Posted by Muskaan Rafique
Follow:
“Start writing, no matter what. The water does not flow until the faucet is turned on.”- Louis L’Amour21| LAW STUDENT| WRITER|
2 Comments 2 Comments