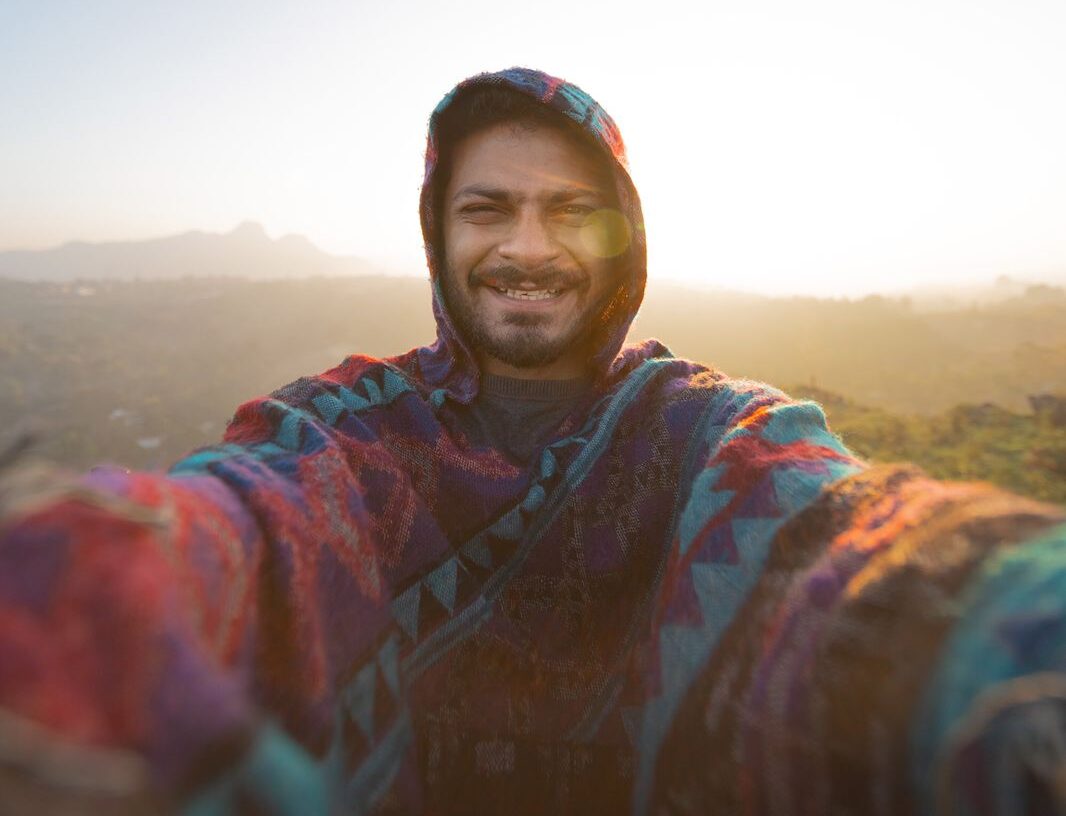 POSTCARD PHOTOGRAPHER! Yeah, that’s what you remember about him the most; apart from his obviously brilliant vlogs about simple tribal people and their lives. A Kerala boy drawn to the hills. An introverted loner drew to the majesty of the mountains that reverberated his ethos. A businessman at home trying to step in with his father. A photographer by chance who took to the camera to relieve stress.

Yup, quite an introduction for Ashik Aseem the biker traveller photographer whose trademark is to print pictures of his rare nomadic subjects and send those back to them to cheer them up. He prints postcards of his clicks and posts handwritten old fashioned sublime notes to his fans on them from lost post offices around India examples being the floating post office of Kashmir the highest post office in Spiti.

Unique very unique In fact as unique as his photography that has been picked up by almost every platform on social media and offline as well because when this traveller photographer is not out in the mountains he is still either doing product photography or clicking architectural photography for editions. Self-taught and self-motivated Ashik picked up the camera to prove to himself that he could support his passion and his family both through his hobby and boy did he do that!!! If his collaborations with the companies are a pointer you would know about the acclaim and widespread popularity of this hard to get hold of a chameleon of the lens. Xiaomi and One Plus being few of the major brands in his kitty he has thus defied the misconception of phone photography is not a thing as well.

Because clicking is an art a vision that the medium definitely helps but cannot defeat if you have the eye. In fact, nothing whatsoever seems to deter Ashik and he is the first person I met who was happy with the covid times too because as he says in his trademark way that lesser crowds meant more freedom to explore for this introvert. Well here is one example of hard work for whomever the covid lockdown was a time to work and learn since no excuses for this traveller of landscapes.

Having explored Kashmir, Punjab, Rajasthan, Uttarakhand, Himachal, Arunachal Pradesh, Meghalaya, Nagaland and West Bengal, In fact, some places several times to give a timeline authentication to his photos Ashik surprised me yet again when he revealed that his basic smattering of Hindi gets him through most remote places that he has never had issues with food and language and attitudes. Perhaps it’s his own simplistic approach to life and adoption of tea over coffee, Dal Chawal over multi-layout or sleeping in a mobile pitch tent when accommodations are not available that reverberate back through the universe. A contented focused loner whose aim is to bring about change through original content sometimes visiting the same place again and again and again to muse over various reactions of people to win over nomadic tribes to lock in happy smiles of people and children who take days to warm up to him and his camera.

“The reaction of people changes when being recorded versus in real-time”, he says so he wants the real bits which take longer because trust has to be built. Siting example of a tribe in a remote village in Kashmir where fun chatter bike rides and chocolate gifts over several day trips were the what paid fruit for his charming photos. From Hari Menon to Steve Mc Curry from Sajad Machu to Ganesh Bhagal and many other national and international photographers he appreciates all and yet marks his own distinct style
From NatGeo to lonely planet.

From your lens to a worthy shot, everyone seems to take notice of this lonesome vlogger recording the small happy moments of the lost people and tribes of India. His range of gear is as diverse as his skills and travel map across India digging into mobile GoPro or A7 R 4 as per the need. Charting the course on local travel or his Pulsar NS200 Ashik has had many setbacks too from losing gear or family needs or falling sick on the road to the point of being hospitalised yet nothing seems to stop his focused drive to create beautiful work.

“Know the people, Revisit, Reclick“, being his mantra to record the changing diaspora of the landscape across the country and soon on international borders as well(Iceland being on his watch list).

Ashik Aseem it seems is an unstoppable force of nature blending with the unknown in nature to bring out the best of nature.