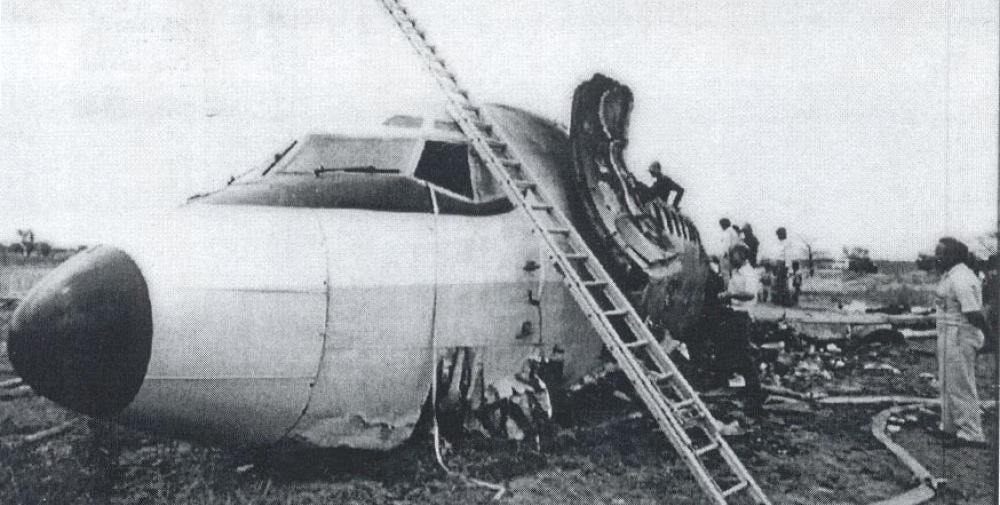 It can easily be said that airplanes are one of the most fascinating inventions made by humans. It is a living proof that people have been motivated by their thoughts and intentions to achieve almost anything that they imagine. But what happens when these massive machines go berserk? It creates havoc and misery all around. The fumes blazing as if the Apocalypse has come, people crying for their lives. Here, we bring you the 5 worst air crashes that happened with Indian airliners or happened on Indian soil. These incidents have went down in history as a lesson written in golden words of what not to do in case you become a pilot.

On 12 November 1996, Saudi Arabian Airlines Flight 763, a Boeing 747 en route from Delhi, India, to Dhahran, Saudi Arabia, and Kazakhstan Airlines Flight 1907, an Ilyushin Il-76 en route from Chimkent, Kazakhstan, to Delhi, collided over the village of Charkhi Dadri, around 100 km (62 mi; 54 mi) west of Delhi. The crash killed all 349 people on board both planes, making it the world’s deadliest mid-air collision and the deadliest aviation accident to occur in India. The captain of the flight was a 45-year old veteran pilot with more than 9,800 flying hours.

When the controller called KZA1907 again, he received no reply. He warned of the other flight’s distance, but it was too late. The two aircraft had collided, the tail of KZA1907 cutting through SVA763’s left-wing and horizontal stabilizer. The crippled Boeing quickly lost control and went into a rapidly descending spiral with fire trailing from the wing. The Boeing broke up before crashing into the ground at 1,135 km/h (705 mph), nearly supersonic speeds. The Ilyushin remained structurally intact as it went in a steady but rapid and uncontrolled descent until it crashed in a field. Rescuers discovered four critically injured passengers from the Ilyushin, but they all died soon afterward. Two passengers from the Saudia flight survived the crash, still strapped to their seats, only to die of internal injuries soon after. In the end, all 312 people on board SVA763 and all 37 people on KZA1907 were killed.

Alliance Air Flight 7412 was a scheduled domestic passenger flight operated by Alliance Air, a subsidiary of the airline Indian, from Kolkata’s Netaji Subhas Chandra Bose International Airport to Indira Gandhi International Airport in Delhi. On 17 July 2000, while on approach to its first stopover in Patna, the Boeing 737-2A8 operating the route nose-dived and crashed into a residential area in Patna, killing 60 people including 5 on the ground.

Flight 7412 departed Calcutta (Kolkata) at 06:51 on 17 July 2000, for a flight to Delhi, with stops at Patna and Lucknow. Patna ATC asked the aircraft at 07:17 to report for descent and also to check descent traffic with Kolkata Area Control. The aircraft soon responded that Kolkata had reported negative traffic. Flight 7412 was then cleared for descent to FL75 and asked to report 25 NM and the same was reported by the aircraft at 07:26. Flight 7412 was cleared to descend to 4000 ft. and was asked to report for approach runway 25.

At 07:28, Flight 7412 reported commencing the turn and at 07:31 reported crossing the airport area and coming up on the localizer. Flight 7412 was then asked to descend to 1700 ft. The crew had been cleared to land at runway 25 at Lok Nayak Jayaprakash Airport at Patna when the pilots requested a 360-degree orbit due to the flight being high on the approach. Permission was granted and a left turn was initiated. During the left turn, the aircraft stalled. The plane then grazed a few single-storied houses in a government residential housing estate and crashed in a government residential colony behind Gardani Bagh Girls School at Anishabad, which is located about 2 km southwest of the Patna Airport. The aircraft broke into four pieces.

The airport ambulance had proceeded to the crash site along with the CFTs. Two injured passengers were transported to the PMCH in the first instance. Subsequently, the second ambulance from the airport was also pressed into service to transport the remaining injured passengers for medical aid. Shortly after the arrival of the airport ambulance, ambulances from other assisting agencies also arrived and helped in removing all the injured for medical aid.

On 22 May 2010, a Boeing 737-800 passenger jet operating Air India Express Flight 812 from Dubai to Mangalore, India, crashed on landing at Mangalore. The captain had continued an unstabilized approach, despite three calls from the First Officer to “go around”, resulting in the aircraft overshooting the runway, falling down a hillside and bursting into flames. Of the 160 passengers and six crew members on board, 158 were killed (all crew members and 152 passengers) and only eight survived. This was the first fatal accident involving Air India Express.

With its 158 fatalities, Flight 812 is the second-deadliest accident involving the Boeing 737 Next-Generation aircraft (surpassed by Ukraine International Airlines Flight 752 10 years later with 176 deaths), was the deadliest accident involving all variants of Boeing 737 until Lion Air Flight 610 crashed in October 2018 with 189 fatalities, and is the third-deadliest aviation disaster in India, after the 1996 Charkhi Dadri mid-air collision and the 1978 crash of Air India Flight 855.

The accident involved a Boeing 737-8NG(SFP), one of the few 737s with Short Field Performance package to use for landing in airports with short runways, with the aircraft registration VT–AXV and manufacturer’s serial number 36333, line number 2481. The aircraft first flew on 20 December 2007 with the Boeing test registration N1787B and was delivered a month later. The crew consisted of Captain Zlatko Glušica, First Officer Harbinder Singh Ahluwalia and four flight attendants. Glušica, aged 55, was a former employee of Jat Airways of Serbia, a British and Serbian national with over 10,000 hours of flying and over 7,500 hours of command experience (including 2,440 hours on the Boeing 737), and Ahluwalia, aged 40, was a former employee of Jet Airways who joined Air India Express in 2009 with 3,620 flight hours with 3,319 hours on the Boeing 737; both pilots were based in Mangalore.

Indian Airlines Flight 491 was a scheduled passenger flight on its connecting route from Delhi to Bombay, with stops en route at Jaipur, Udaipur, and Aurangabad.

On 26 April 1993, the heavily-laden aircraft started its takeoff roll from Aurangabad Airport’s runway 09 in hot and humid temperatures. After lifting off almost at the end of the runway, it impacted a lorry on a highway at the end of the runway. The left main landing gear, left engine bottom cowling, and thrust reverser impacted the left side of the truck at about seven feet above road level. The aircraft then hit high tension electric wires northeast of the runway, and crashed into the ground.

The probable cause of the crash was “Pilots’ error in initiating late rotation, and following wrong rotation technique” and “failure of the NAA to regulate the mobile traffic on the highway during the flight hours”.

There was speculation that the truck was actually on the runway and not outside on the road, but was subsequently clarified in the Lok Sabha.

According to eyewitnesses, the plane, which dashed against a stationary truck while take off, maintained its flight for a few kilometres and then began losing its altitude. It hit a high tension wire and caught fire at its rear portion. The plane skidded for a few kilometres on its belly and burst into flames before breaking into three pieces. The injured were admitted to government medical college hospital. One of the air-hostesses opened the front door and some passengers managed to jump out of the aircraft. Soon the entire area was cordoned off by the police who along with fire brigade personnel started extricating bodies trapped under smoldering wreckage of the plane. Many of the passengers were charred beyond recognition, police said.
24 passengers boarded the flight at Jaipur, 37 from Udaipur and 51 from Aurangabad.

An Air India Express plane with 190 people on board crashed at an airport in the southern state of Kerala, killing at least 18 people, officials said.The Boeing 737, en route from Dubai, skidded off the runway in rain and broke in two after landing at Calicut airport, aviation officials said.The flight was repatriating Indians stranded by the coronavirus crisis. Prime Minister Narendra Modi said he was “pained by the plane accident”. The rescue operation at the crash site has now been completed and survivors have been taken to hospitals in Calicut and Malappuram, according to Kerala Chief Minister Pinarayi Vijayan. Dozens of people were injured, 156 of them seriously, officials say. Air India Express said the two pilots were among the dead.

Flight IX 1134 was carrying 184 travelers, including 10 infants, and six crew.The airplane crashed at 19:40 nearby time (14:10 GMT) on Friday, as it endeavored to land for a second time at Calicut International Airport. The main endeavor was prematurely ended by the pilots in view of the overwhelming storm season precipitation lashing Kerala. India’s Civil Aviation Minister, Hardeep Singh Puri, tweeted that the airplane “overshot the runway in blustery conditions”, at that point plunged down a 35ft (10.6m) slant, before breaking in two. He said a conventional request would be completed by India’s Aircraft Accident Investigation Bureau (AAIB). The chief general of India’s National Disaster Response Force, S N Pradhan, said Calicut air terminal had a “table-top runway” and that the airplane fell into “a dump” subsequent to slipping across it. He said the contact with the base of the jettison made the fuselage break in two, and that the front half was “severely ravaged and harmed”. Mr Puri told supporter DD News that people on call had the option to safeguard the travelers on the grounds that the plane didn’t burst into flames. A few had to be cut free.