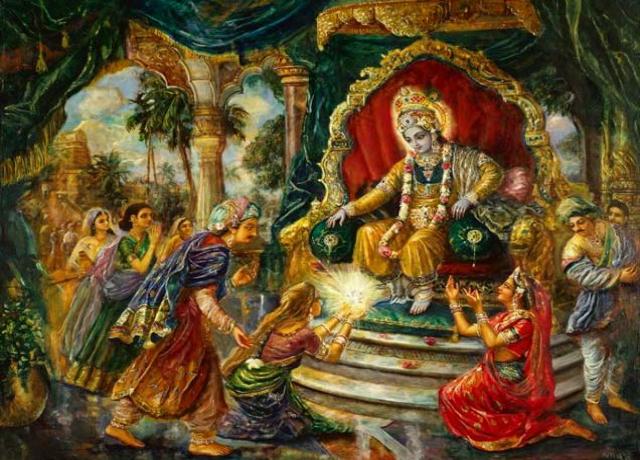 As being Yadav a part of Krishna clan. I always fantasy with his stories, my grandmother used to tell me stories every night this is my one of the favorite, Krishna’s story takes place in a later, third quarter of the world, the Dvapara yuga when the bull of dharma stands on two legs. Krishna’s world is thus closer to the world we live in, the final quarter or Kali-yuga, and shares the hazy morality and ethics we encounter today. In this world, the concept of dharma becomes even more difficult to express and institute. And this is most evident in the story of Yayati.

Yayati, an ancestor of Krishna, is cursed by his father-in-law to become old and impotent when he is discovered having a mistress. Yayati begs his sons to suffer the curse on his behalf so that he can retain his youth. Yadu, the eldest son, refuses to do so because he feels his father should respect the march of time and not feed on the youth of his children. Puru, the youngest son, however, agrees to accept his father’s old age.

Puru’s sacrifice makes Yayati so happy that, years later, when he has had his fill of youth, he declares that the younger Puru will be his heir and not the elder Yadu. Further, he curses Yadu that none of his children or his children’s children will be entitled to wear the crown. Krishna, being Yadu’s descendent, is therefore never king. Kingship passes on to Puru’s descendants, the Pandavas, and Kauravas, even though time and again they demonstrate their unworthiness to wear the crown. What seems a good thing in Ram’s yuga becomes a bad thing in Krishna’s yuga. Ram’s unquestioning obedience to his father transforms him into God. But Puru’s unquestioning obedience results in the collapse of society. Dashratha requests Ram’s obedience so that he can uphold his word. Yayati, however, demands the obedience of his children for his own pleasure. Yayati exploits the rule for his own benefit whereas Dashratha enforces the rule so that royal integrity is never questioned. The rule (obey the father) evokes dharma in Dashratha’s case, but not so in Yayati’s, Yayati’s conduct results in a society where the letter of the law becomes more important than the spirit of the law. This is the world of Krishna, a world where what matters more than the deed is the thought behind the deed.