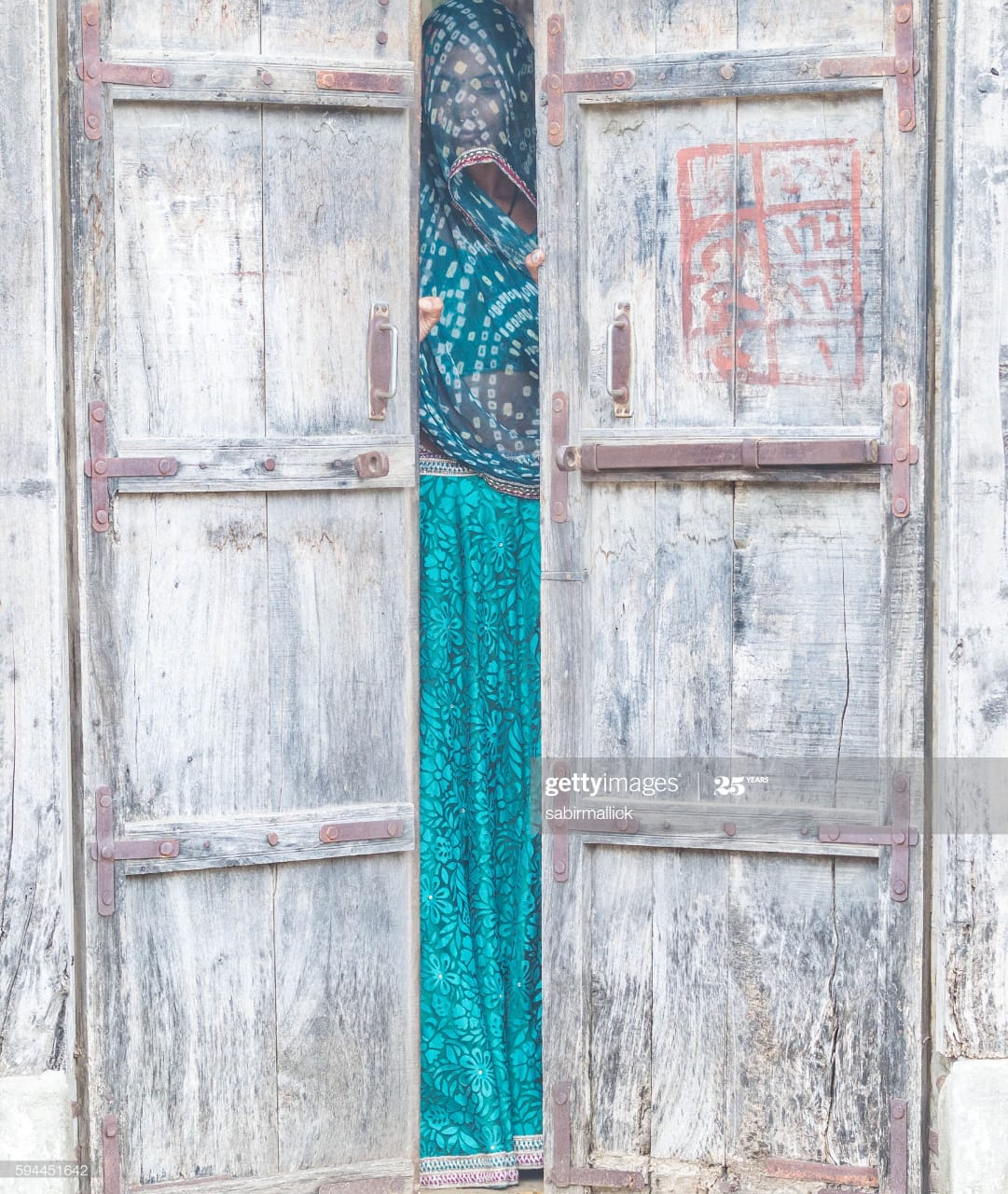 Anupama Tripathi a.k.a. Anu was born in a very posh family of Bhopal. Her family was the epitome of grace. The men were always dressed in kurtas, with their hair oiled back and a red tilak on their forehead, and the women in sarees and their faces covered with a veil. Anu sometimes thought that she had never seen any woman’s face in her family other than her mother, that too only when no one else was around.

Paradoxically enough, Anu never understood why everything was like it was. Why her mom was always saying nothing more than “Haan ji” and “Nahi ji”.Why her dad never had to use “Ji” with his words. Whenever her mother’s pallu would slide off of her head sometimes while doing household work, her dad or daadi or dada or any elder would appear from nowhere and condemn her behavior, and she would act like lightening and grab the pallu and bring it down to her chin. Sometimes, Anu wondered if her mother had seen anything other than people’s feet in her life.

When Anu became a teen, her daadi started showing similar behavior towards her as towards her mother. She was told to stop wearing skirts and instead learn to embrace salwar kameez and dupattas. She hated wearing those loose salwar and managing that dupatta was a task.

Sometimes, Anu wouldn’t even do anything and her daadi would look at her with disgust filled in her eyes and loudly, almost like a siren, call her mother and say, ” Bahu, kuch sikhaya bhi iss apni laadli ko ya yun hi ye anghade lakad ki tarah badhti jaa rahi hai?”(So you can say that Anu was a log of wood to her, useless untill carved into something). On which Anu would look at her daadi, dead in the eyes. Daadi would say, ” Dekho to ise, Badtameez kahin ki. Sharam nahi tujhe zara bhi. Aankhen neeche kar.” (Boy, how elders get offended when you stare at them.)
So, Anu grew up like this, rebelling at almost microscopic level. She wanted to say a lot of stuff, do a lot of stuff, but she stayed quiet because she didn’t want daadi or papa lashing out at her mother because of her. Sometimes she wished that her mom would just come out of her pallu and throw away the dupatta and walk out of the house like she was a human being too. Unfortunately it never happened.

Anu turned eighteen, and on her birthday, her dad came home with the “Good news” that the Pradhan from the next village had asked for Anu’s hand for his son.

“Pradhan’s son”. Anu thought. A 30-year-old man. Anu’s mom was more close to his age than Anu herself. This time she really, really wanted her mother to say something, at least for her, but again, nothing. When she herself tried to revolt, she was called, ” Badtameez, Behaya, ” (and all the synonyms of disrespectful you can think of). So, Anu compromised and became Anupama Chaubey. On the day of her wedding, her mother told her, “Ladkiyan ghar ki izzat hoti hain, tu hamari thi, ab unke ghar ki hai. Achhe se rehna.” ( So, along with lakhs of cash, a car, a refrigerator, and a flat screen as dowry, Anu was also taking “Izzat” along with her.)
With time, Anu became a lot like her own mother. She was now so much used to the pallu that she started recognizing everyone by their feet.

In the first year of marriage, Anu bore a daughter, and in the second a son. She named them Avni and Aaryan. Both her children were her life to her, but mostly Avni. She saw the difference in her family’s demeanor when both her children were born. She noticed how there was melancholic hue in the atmosphere when Avni was born and somehow suddenly it became festive when Aaryan was born. How her mother in law would slap Avni if Aaryan cried and tell Avni time and again that she was supposed to take care of her brother. Fortunately Aaryan was nothing like them. His mom and sister were very dear to him. When he was in high school, he bought a pair of sunglasses from the money his dad gave him as pocket money and gave them to his mom. Anu tried them, taking off her pallu and tied it around her waist, Aaryan looked at her and said, ” Wow mom, you look like a badass.” All three of them giggled after that and had their moment. Then they would hear their dad coming and again the veil drooped to Anu’s chin.

Anu managed to live like that for a long, long time. Quiet like a cow. She blamed herself for that sometimes. She had a lot of “ifs” and “buts” in her mind. “Only if she had completed her school, but then her mother would have had to listen a lot. Only if she had a job, but who would look after the kids. Anu’s life was weaved with all these thoughts.
When both of her children passed out from school, Aaryan was sent abroad for further studies, and Avni was supposed to get trained for becoming someone else’s house’s “izzat”, but Avni wanted to become a teacher. She wanted to study more and for that, she had to leave the house and go to the city.

Her dad and daadi were very critical of her leaving the house alone anyways and going for studies was a big taboo. When Avni talked to Anu about this, at first Anu got scared for Avni, but then she thought of all the things that Avni will be able to do that she could have done, that she wanted to do. Then she thought about her husband and her mother in law and felt scared again. She felt like reality took a toll on her daughter’s dreams. Then she thought some more. This time, her train of thoughts took her to her own mother, so, Anu chose to not let her fears spoil her daughter’s life.

So, she took Avni with her and went to talk to her husband. Anu said,”Avni padhna chahti hai. Aage ki padhai ke liye Dilli jaana chahti hai”. (How difficult were those words to get out of her mouth, only she knows that.) She couldn’t see her husband’s reaction to her words, but she could feel his fierce gaze piercing through her veil. He said,” Tumhara dimag to theek hai? Hamare ghar ki ladkiyan bahar nahi jaati.”( Because they also are the “izzat.”) “Kaisi behaya baat keh di tumne ye. Bolne se pehle ek baar soch to liya hota.”

“Lekin, use padhne ka haq to hai.”(She does deserve to study). Anu said, mustering all the courage that was crushed under a patriarchal society. On which, her mother in law appeared out of somewhere, and said,” Badtameez ladki, kuch lihaaj to kar le. Pati hai vo tera.”( You shameless woman, he’s your husband. Respect him.) This was the tip of the iceberg. After this, daadi went on and on, about how her bahu was useless and ungrateful. (She was supposed to be grateful, as her husband provided for her.)
Avni was watching everything from the corner of the room. She thought a lot and then decided to speak. “Daadi, maa ko kuch mat kaho, unki koi galti nahi.” ( Mom’s not at fault.)
“Chup hoja tu. Pankh nikal aaye hain tere
”
(Shut up. You’ve started growing out wings now).
Anu wanted to say something, but her patience still had some strength left in it and this was Strike one.
“Par daadi sach mein, main hi zidd kar rahi thi.” ( Daadi, seriously, it was me who was being adamant.)
“Badtameez, zubaan ladati hai. Tujhe to paida hote hi maar dena chahiye tha.”
(You should have been killed the day you were born.)
Strike two.
Big drops of tears formed in Avni’s eyes. She was more angry than sad. So she said,” Toh maar deti na. Abhi bhi to til til kar mar hi rahi hun.”
(Then you should have. I am still dying bit by bit.) While wiping tears off her cheeks.
“Bas bahut hua, ruk tujhe to mai batati hun.”( That’s it. Wait, I’ll show you now)
Saying that, she lifted her hand to hit Avni.
Strike three.
The water had crossed over Anu’s head now. She grabbed her mother in law’s hand and jerked it off forcibly.
Everyone was stunned. Her mother in law, petrified. No one thought, that Anu, who was always hidden behind the curtains, would emerge like this. Her husband begun to say something, but Anu grabbed Avni, took her into her room and locked it from inside.
Her husband kept knocking and thumping on the door, but she packed Avni’s and her stuff in a bag and opened the door. Her husband saw that and said while laughing, “Achha, ghar chorh kar jaengi mohtarma. Jaogi kahan? Kaam kya karogi? Khaogi kya?”
(Oh, madam has decided to leave the house. Where will you even go, what will you even do? What will you eat?)
Anu thought of giving an explanation at first, but then she thought what good is casting pearls before the pigs. So, she just left with her daughter. She thought that rebellion was now called for. She went out of the gate and saw the sun shining it’s scorching heat upon them like it was telling her of all the hardships she’ll have to go through if she left right now. Despite of all that, she decided to take that path.
She slammed the door behind her and left her pallu back.
Avni gave her mother the sunglasses and said, “Badass lag rahi ho maa”, and smiled.
Her smile might not have had all the answers to Anu’s questions, but she knew, she could conquer anything in the world now.

After all, she was a BADASS.