THE WORST FASHION TRENDS OF THE LAST DECADE

It’s easy to say that the style of our past decades has been inspiring, elegant, and magical but bad fashion has also been around since forever. Trends come and go, some more questionable than the others but it’s time to look back and wonder, what were we thinking? There are some trends still going strong and we are hoping that they disappear soon.

Here are the worst fashion trends from the last decade.

The crossover between sneaker and wedge mainly served the purpose of giving the illusion of height without the heel. The bad thing about this is the thought of mixing things that never should go together. Another issue is that they look weird and aren’t necessarily the most comfortable. It’s time to leave them behind and stick to platforms shoes.

This trend first became popular in the 1980’s but some how it came back. Geena Davis showed upto the Oscars in 1992 in a mullet dress and which became known as one of the worst red carpet fashion moments of all time. We don’t have to go back the resolet’s not.

Low-rise jeans, also known as hiphuggers, were first made popular in the ‘90s and 2000s. These pants sit on low the waistline, have to be hitched with the belt and its quite uncomfortable while sitting or traveling. Low cut pants might leave a person look stubby hence one more reason to totally dislike low rise jeans.

Whoever thought that multi-patterned, multi-colored tights would flatter any human’s legs was seriously mistaken. These tights look so unflattering and out of fashion. If you are wearing paper-thin printed tights for anything other than a Halloween costume, you definitely should stop.

The corset is the most loaded fashion item. Women were often laced so tightly their breathing was restricted leading to faintness.
In fact, long term tight lacing led to rib cage deformity and I don’t think anyone wants to cause this much trouble to themselves.
If there is such a thing as doing too much for fashion, corsets are it. 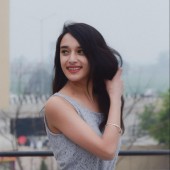