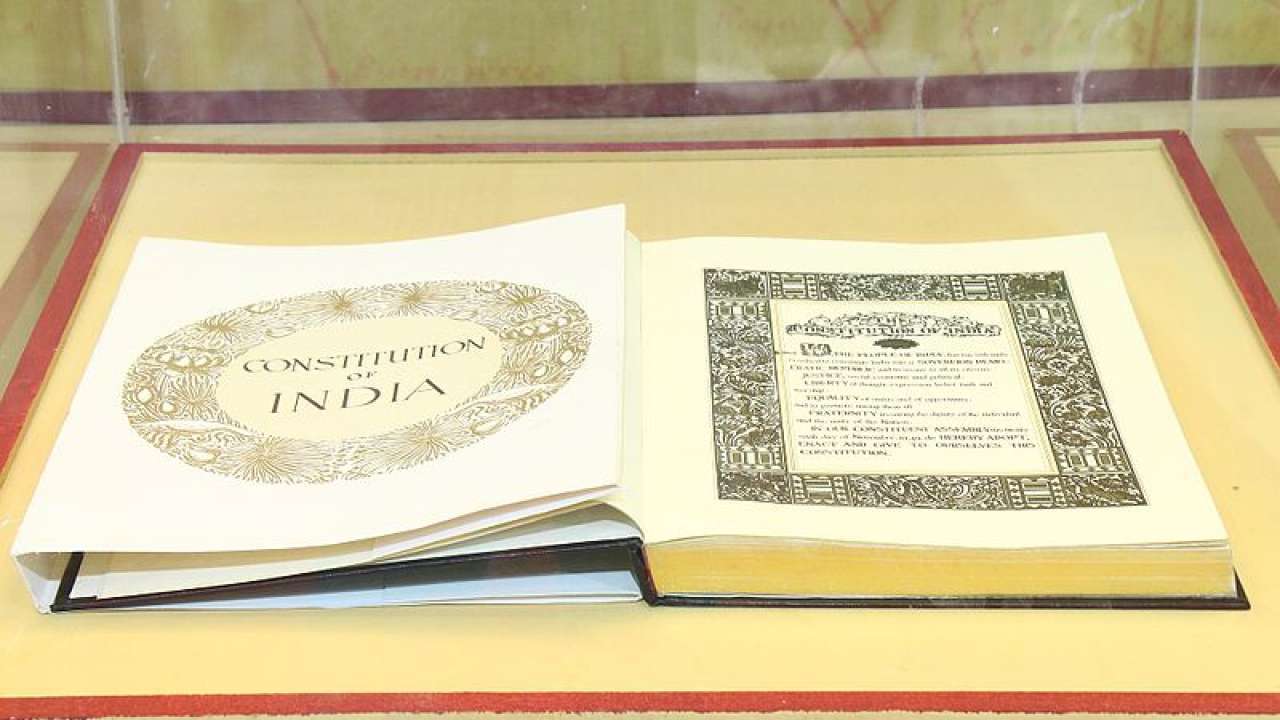 The idea of the Constitution makes us wonder about its origin and its utility. In Hindi, the word constitution is said to be ‘Sanvidhaan’ which actually is driven from Rigveda, where the meetups (Sabha and Samitis) in the form of Sanvindha or Consensus was made in order to pass a judgment, and hence the book based on the consensus is termed as ‘Sanvidhaan’. The Indian constitution is waging on for the past 71 years. Seeing the very turbulence where the lack of system and its implementations gave a hard blow to its essence sometimes. However, standing tall the constitution with its vivid description and its unidirectional approach towards the development balance the multicultural and multi-diverse Indian land.

Even though the Constitutional development has taken place from the Colonial period, but its laying foundation or its objectives is given by Mr. Jawaharlal Nehru, in his speech on 13th December 1946. His ideas are summarized and put into the words of the preamble by the Constituent Assembly, which also briefly describes the Constitutional aspects. The constitution was completed in November, but to embrace the ‘Purna Swaraj’ slogan of 1930, we find the ‘REPUBLIC DAY’ to hold in January.
The Constitution was also criticized during those days, for its bulky nature. Its idea of being approved by the constituent assembly which was neither a representative body nor a sovereign body was criticized. Granville Austin, a British constitutional expert, remarked: ‘The constituent assembly was a one-party body in an essentially one-party country. The assembly was the congress and the congress was India’. Similarly many questioned about its relevance of ethnicity, as Mr. Churchill commented that the constituent assembly represented ‘only one major community in India’.

However, the Constitution was framed and was put into implementation. The very Constitution talked about the various aspects, it had 22 parts, 395 articles, and 8 schedules, making it the lengthiest written Constitution. It is drawn from various sources as mentioned earlier, e.g., the concept of Fundamental Rights is taken from American Constitution, and the Directive Principles are inspired from the Irish Constitution.
Its various schedules and articles talk about the various issues covering the subject matter of ‘including the new territories, All India services, Tribunals, Powers of the constitution, etc.’ Many people questioned about its Elephantine size, including HV Kamath, who said, “I am sure that house doesn’t agree that we should make the constitution an elephantine one”. ‘It feels like the constitution-makers didn’t want to leave anything per se to ambiguity, hence covering everything in the single document’, commented by KC Wheare. Its long survival can be attributed to the long-sightedness of the Leaders who happened to be very modern in their approach, as like Pandit Jawaharlal Nehru, Dr. B.R. Ambedkar, Dr. Rajendra Prasad. Their charismatic approach made the assembly stumble. The first reason can be the Long Sightedness of the constitution-makers.

The constitution of India is a living body. It has various aspects under which it tries to remain dynamic. It has been stated in various cases including the Minerva Mills case, 1980 and Keshvananda Bharti Case, 1973, where the Supreme Court defined the basic structure of the Constitution and told that it derives its powers from the will of the people. As the very first line of the preamble says, ‘WE THE PEOPLE OF INDIA’, According to Nandini Sundar, Authoring the Constitution by the people has played a significant role in its long survival. However, she raises many questions on its systematic approach. The Constitution is also protected by Judicial Activism which came into vogue in the late 20th century. Where the Judiciary observed the governmental practices and put the wrongs in custody on its own.

The Quasi Federalism in its nature also supports its long survival, India being the country where after every 12 Km, a new dialect is found, where many cultures, religions have to live with each other in equilibrium. The Constitution in order to solve down that particular problem has maintained the center-state relations, where the Centre has been given more powers as compared to the state. The first article says, ‘India i.e. Bharat is a Union of states. It majorly covers the whole prospect of the foundation of India, where India stands strong and indestructible in terms of its union, unlike that of American. Along with that, there are three lists been made, State, Centre, and Concurrent list, in which the state list get to make the rules about the subjects such as law and order, education, health, etc., and Centre makes the generalized rules for the whole country. When it comes to the concurrent lists, the ideas of state and center are taken into unison account and hence given the place. However, if the state doesn’t agree with the Centre, then the Centre having an upper hand. This whole Quasi Federal Constitution makes India afloat with unison for so many years, hence the Constitution is not also seen to be of any change, where it gives the state to breathe freely, having their own Legislative assemblies, their own services, yet also binding them together with the hook of National Integrity.

According to the new article on Atani Danu, ‘the most salient distinction between the US and Indian Constitutions lies in the relationship between the people and the government the Constitutions define. The US Constitution places the people as the principal and the government as its agent. This is evidenced in the limits that the Constitution imposes on the government. The Indian Constitution places the government as the master and people as its servants—as can be expected of an essentially colonial government. As the British government before it, post-1947 Indian governments took on the role of the master and imposed limits on the economic and civic freedoms of Indians.’ Even though it sounds like one of the truth, but with the diversity and cultural tussles in a country like India, if the government will not play as a regulatory authority and being aloof of the masses to work under the aspect of socialism, then the major question of the sustenance in a country like India will rise.

After the Emergency was implemented and India witnessed a jolt of the dark phase of Democracy, the press was censored, the opposition was in jail and every little thing was in the hands of that time supreme leader, Indira Gandhi. The misuse of constitutional powers to curb the free voices was seen for the first time. Hence, we observed that as soon as the new elections happened. Janata Party, which had a manifesto of bringing the democracy and Constitution back to its legacy, came in power and brought the 44th amendment, which not only dealt with the wrongdoings of the 42nd amendment but also brought a vital change with respect to the powers of Emergency. Now the Parliament also had a role to play.
The Introduction of the 73rd and 74th Amendments in the year 1993, not only brought the democracy at the deeper, grass-root level but also made the customs easier to comprehend. The people of remote areas now participate in the very celebration of their democracy.

The 86th amendment was in the lieu of Gandhian principles, which wanted to make the country a place where education could be free for all. It also implemented a MID DAY MEAL SCHEME, which allure the young minds to come and to not have a problem related to proper nutrition.

The other major amendments are the Commission for Backward Classes and the Reservations for economically weaker sections of the society.

The purpose of these amendments is to keep the spirit of the constitution and the value on which it has been made alive. Hence, the amendments give a new platform for the changes, and further to develop.

Hence to summarize or to conclude, we must say that the constitution is in itself is a living entity, which has its own soul and its own body, as stated by the Supreme Court time and again. The Constitution is extremely lengthy, which gives an abundance of subjections and interpretations, however, it also clears that whatever it is, the Supreme Court will be acting as one of the directorates to give the final verdict about the interpretation. The very lengthy constitution covers every aspect, even for every religion, every community, or caste. The length shows the idea and mind of the Constituent assembly that they put in order for the proper functioning of the government and hence the country. The quasi-federal form of government is yet another way to show how the constitution-makers were very well versed with the idea of regionalism, and hence they put their thought process into it. Making the Centre more dynamic and more powerful, it binds the whole country together. The idea of Amendments is not new. Our constitution has been driven by various constitutions and literature all over the world. Hence the constituent assembly also took nearly 3 years to complete it. The constitution not only gives a path to the light where the democracy will shine but also supports the time where the tyranny has been observed. All over the world, no other constitution could survive for such a long period of time. Hence the whole credit of the same goes to the constituent assembly which took the thoughts in the mind and provided the constitution which was not only long-sighted but could be adopted by such a diverse cultured population.

By Heerak Singh Kaushal
Follow:
A person who is not afraid to 'call a spade, a spade'. You can often find me in two moods, either talking to everyone or just a quiet child. I live in a bubble that whatever it is shown in the newspapers, people are still good at heart. I wish you the best and may your pain just blow away!
1 Comment 1 Comment