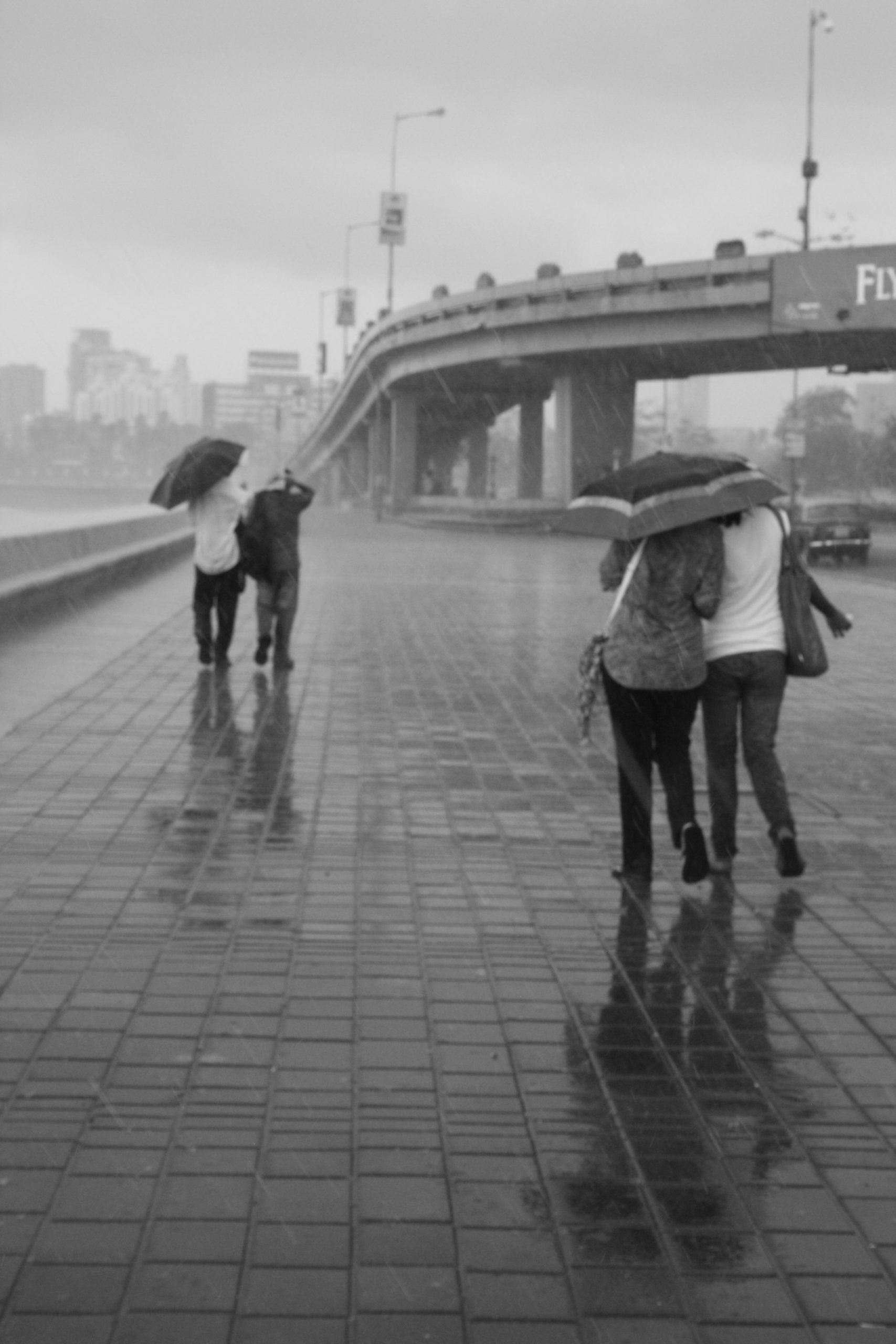 Marine Drive has played Cupid, in myriad love stories and it has time and again made those torrential rains more gorgeous and unforgettable. The spellbinding view of the Arabian Sea is truly invincible and the sea breeze wafting across your face will certainly set the right mood for a whimsical evening. Late sunsets and nights are picture-perfect, as the alluring lights and cool breeze make the “Queen’s Necklace” simply striking.

The spouting sound of the waves roaring on the concrete blocks of Marine Drive, a panoramic view of the city’s skyline, and the crisp ocean air singing in one’s ear. That’s Marine Drive for you! Isn’t this an ideal setting for romance? An astounding quixotic stroll along the scenic stretch with clasped hands.

Marine Drive is one of the best places to hangout in Mumbai during monsoons, simply to watch the downpour breathing life into the Arabian Sea but what takes the cake is the spectacular panorama of the sea that only the eyes bear witness to. Although there is no dearth of marvelous places to eat in Mumbai, this place being the perfect adda is frequent by couples and groups of friends enjoying the scented air of the ocean playing a tune in the background.

The city of Mumbai is a bustling metropolis that is continually on the move, with apparently no place for couples to grab a quiet moment. The pause button was not at all invented for this fast-moving city as it doesn’t really seem to pause for anyone. Watching beautiful sunsets, romantic walks, diving into the plate of bhelpuri, enjoying the famous buddhiya ke baal (candy floss) just like a kid ignoring the presence of the people around you.

The chat vendors nuzzled away in a corner, it’s almost tantamount with Mumbai — the famous piping hot cutting chai to invigorate one’s senses and of course, I have no intention to school you’ll on the chai-making that is almost akin to creativity with the secret ingredient adrak (ginger) that is spun in metrically to heighten its taste. If in Mumbai, do take a recce of the best of these tapris in this city.

Rains in “Mumbai” is not just a season, it’s a feeling to be felt embracing all the whooshing, swaying, sopping and splattering into the potholes to ditches, the roadside ‘Chai ki Tapri’ that is a blessing in disguise to all the rain-soaked Mumbaikars serving out that hot, sweet and milky “Cutting Chai”, served in a small grooved glass – That’s the beauty of rains in “Aamchi Mumbai”

Heaven … well yeah, you read it right – The streets in Mumbai during rains is simply Gorgeous!! The smell of the wet earth when embraced with raindrops!! The perfect sketch of the clouds outlining the sky in shades of silver-grey and not forgetting the parched brown scene flattering the lush greenery, well that’s pretty much how this city looks during monsoon – A Hypnotic Alteration!!

The first rains are beautiful, particularly the scent of petrichor, monsoon gives every place a beautiful makeover – It’s like nature’s touch… Owing to the hordes of people flocking at the seafront enjoying the appetizing roadside junk food.

The city is enraptured during monsoon watching nature knit its magic, those long walks at Marine drive with our loved one under one umbrella. Rain makes the usual routine like drinking tea together more pleasurable and romantic. You are missing something if you have not twirled in the rain with Bollywood to your rescue, as it has dished out so many rain songs making the people with two left feet also throw their umbrellas and get going with the Thumka’s.

However, despite being deeply rooted in romance there are barely any syrupy outcomes if you think of it statistically 😉. After coxswaining the spiky terrains of intimacy, the categorization often leaves an enduring sense of hope behind, sometimes pensive, bereaved of the initial acrimony of anguish.

A small love story of someone known to me that gives me heart eyes every time as a narrator and even while the story is being narrated.

Squelched inside a teeming local fast, among people who will do anything to reach home on time, glancing through the compartment she could literally picture a bubble of thought above each person’s head (rushing home so I don’t miss those saas-bahu serials 😉, the other one Aaj jevanla kay karu (what do I make for dinner??) hahaha lol typical baiko, while for her it was the grief of her break up from her fiancé that had happened a couple of days ago).

Getting back to the crowded train, ufff hands were confined in such a spot that she couldn’t even pull out her earphones. Finally given up hope of avoiding the thoughts of her breakup, glancing around resigning to the fate that she’ll have to dive back into the sweaty body odor 😉 Expecting to see nothing interesting, her eyes fell on him through the separating bars in the adjacent compartment. A tall frame, clear fair appearance, curly hair… his eyes had an intense gaze. It went on for quite some time staring at each other for a few seconds and then looking away, but the two of them just couldn’t stop stealing glimpses every now and then. Amid all of this was “Agla station, Church gate” – the announcement puts an end to the debate with a big full stop. As they prepare themselves to get pushed out by the Mumbaikars human wave, still managing that one last glance. Out on the platform, they both start walking unknown to the fact that their paths were meant to be crossed.

They both lost each other in the crowd as they stepped out of the station — Whoa, hating your guts for having forgotten to carry an umbrella especially during monsoons, not remembering if it was forgotten on purpose 😉. Both oblivious of the fact that they had unwittingly set themselves for a steamy rainy romance as the cloudburst seemed pig-headed to play cupid. The showers were not the gentle kind that would stir up their hidden romance turning them into a poet, in fact, the downpour was determined to elicit phrases suggestive of having incestuous relationships 😉 (Pun not at all intended).

Standing out of the station, as she extended her hand to halt a cab, but admits this fierce downpour she couldn’t help noticing a familiar tall framed guy who also was hailing for a cab, she squinted her eyes to make it clear so as to not be imagining seeing things but Mumbai rains you see not at all being helpful, but alas to her surprise it was him, how could she forget those intense eyes that she had stared into so deeply. The rain poured in the background soaking up every dry patch on their clothes leaving them with absolutely nothing to wipe their faces with. Smiling at each other they marched with uncertain steps asking the cab driver “Bhaiya Marine drive chaloge??” stepping into two different cabs, oblivious of the fact that they had the same destination. (what’s in store?? They had no idea.)

Two strangers sitting on concrete blocks in the wee hours of the night at Marine Drive, all alone enveloped in silence, battling their own higgledy-piggledy thoughts, watching the sea roar while sitting right there waiting for their

as the vendor called out, turning their heads they extended their hand to respond but they found themselves with a single glass of chai and themselves at a one-arm distance. Wow!! What a small world? In a city as spread as Mumbai, what are the odds for them to be present on the same train, ending up at a one-arm distance with one chai? Now both were staring at the chai Ka glass awkwardly and by the looks on each other’s faces of familiarity the vendor asked them if they were ok to share a cup of tea as it was the last since he was the only venture that seemed to be booming in this monsoon unlike, what seemed their life. Who was this chai for — me or him? Moments later, as if reading her mind: “You first” he muttered taking the chai from the vendor’s hand and scooched it towards her.

The cup tottered in her hand, hesitantly touching her lips all nervous making sure not to gulp the entire chai at one go. After a few sips, the words tumbling out her mouth, here you go, watching him smile as he reached for the cup, sipping whatever little that remained. It was not just the cutting that was shared between them, they somehow managed to talk for hours about all what they had in common and what each of them had lost in their life to roam aimlessly and finding themselves at this couples hangout all alone.

The hustle and bustle of people and the zipping of cars on the road behind them, for that time of the night there were quite a few people strolling along the sea enjoying the breezy air while one could still hear faint music being played in some far distant corner. No wonder, they call Mumbai ‘The City that Never Sleeps’ and its famous quintessential ‘cutting chai’.

Though they were completely opposite personalities, they still managed to talk for hours not realizing the passing of time nor of their changing surroundings the only thing that was constant was one cup of cutting chai. And what seemed to be eternity was only a few hours as the sun shined, and it was time for them to part ways not for good as for them it was only the beginning ….

Love doesn’t need time, but when you find the right person you know it is right because it completes your life as it was the missing piece of your puzzle, that fits just right.

Filched squints, a shared cup of tea, the enticing aura on the 21st of June 2012 night with dollops of lovely happenstances best way to describe in words

By Triscilla Moreira Tellis
Follow:
Writer / Blogger / Author My Motto - When it rains I look for RAINBOWS when it’s dark I look for STARS..
2 Comments 2 Comments