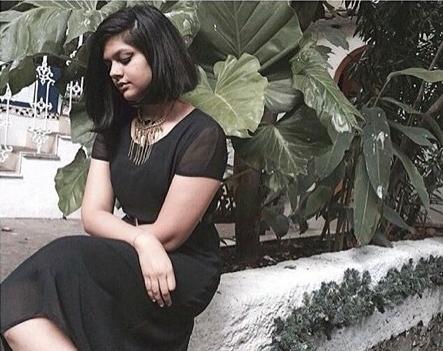 Paridhhi Bajoria (pb) is a 21-year-old musician/student based in Mumbai and the UK. She released her debut single ‘old me’ in May 2020 during the lockdown period in Mumbai. Her songs are mixed, mastered, produced, and written by her in her bedroom with nothing but her laptop and earphones (which also doubles in as her mic), and continues making her definition of ‘Indie bedroom pop’ come to life. Her second single ‘only human’ is currently playlisted on “Radar India” on Spotify, and “Breaking Indian Independent” on Apple Music. Stay tuned for her upcoming debut EP ‘head + heart’!

Contents
1) When did your journey as a musician begin?2) Which was your first song? 3) Which has been your most memorable live performance?4) How do you manage investment for your music productions?5) Who has been your inspiration?6) What is the creative process like behind your work?7) Tell us about your latest track. What was the inspiration behind it?8) Which is your most preferred genre?9) How was life in quarantine?

Here is Paridhhi Bajoria in a conversation with GOGO Magazine.

I started off as being a really avid and passionate listener of all genres of music as a young teen. I started my own music blog that promoted various indie artists from all over the world. I always used to sing for fun and made covers on YouTube and Instagram, but I never thought of it to be more than just a stress-buster. I wrote my first song in the summer of 2019 (old me), but it was a very rough version of my acoustic guitar, and I never thought of releasing it or releasing anything for that matter. However, during the lockdown in the summer of 2020, I was going through a rough patch and turned to making original music as an escape. I started experimenting with different sounds on GarageBand and really liked the end result of what I had created with old me. So I made a very impulsive decision of releasing it. And that was the beginning!

old me was the first song I ever wrote. I released it exactly a year after I wrote it. It is about losing yourself, finding yourself again, and trying to cope with personal changes. I was jumping back and forth a lot between Mumbai and the UK then, so it was hard for me in terms of finding a constant. So I chose to channel my feelings into songwriting.
https://smo-kin.com/pb/old-me

I have not really performed my songs live yet, but I did have a virtual live concert with ‘house concert India’ last month, where I performed live arrangements of my songs for the very first time. I absolutely loved the support and energy of the concert viewers as many were my friends and family, and some were people who had never heard of me before, but seemed to really like what they heard! I even made a few nervous mistakes, but people were very uplifting regardless. It really increased my self-esteem, and I would love to perform live more often after that experience.

I produce all my music on my own in my bedroom, which means I do not have any monetary associations with my music. I simply do music because I love the process of making my songs from start to finish all by myself!

Everything around me inspires me, especially the stories my friends and family and I share, or my personal experiences. I love making observations, drawing patterns, and writing about it.

I usually come up with a rough melody and then write a song on it. Songwriting comes surprisingly easily to me, and I really like jotting different ideas down to set the scene. I produce the backing music after. Sometimes the process is reversed. It totally depends on what I find first.

I recently released an entire 5-song EP titled head + heart. I envisioned this EP to be all about my thoughts and feelings that were prominent during the 2020 summer, where I juggled my time between the UK and Mumbai. The title ‘head + heart’ came about when I realized that those were the parts of me that were impacted by this summer the most. I wanted to explore the fine line between making decisions using my head and heart, and how they can often contradict each other. It is simply derived from my personal experiences and observations. The songs were produced, written, mixed, and mastered all by myself.

I grew up listening to pretty much everything. However I am really finding comfort in listening to bedroom and dream, and alternative pop, and RnB.

I flew back to India from the UK in March and completed my undergraduate degree remotely which was extremely stressful. However, I used music as a stressbuster and that is how I made old me and only human (my first 2 singles)! Life in quarantine was a very complicated mess, but I would not take anything back, or else I would not have started making my own music and I would not have come this far.