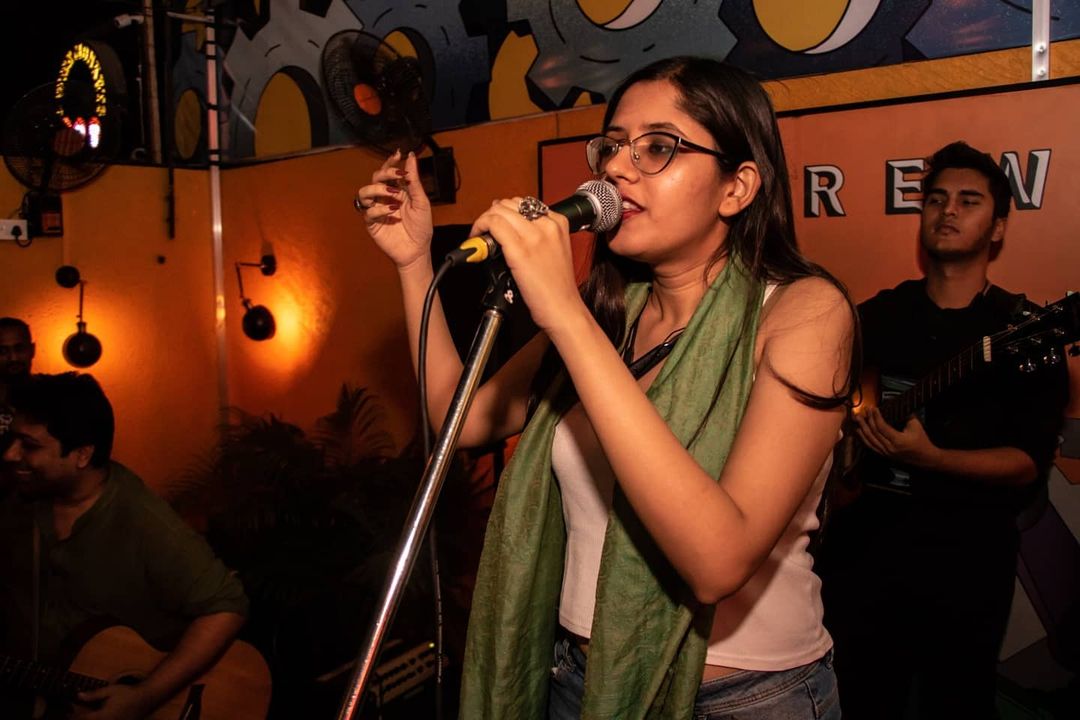 Contents
1) When did your journey as a musician begin?2) Which was your first song?3) How much has social network helped you in creating your audience?4) How was your experience with MTV? 5) Tell us about your work in Bollywood.6) Who has been your inspiration?7) Where do you see yourself in the next 10 years?8) Tell us about your latest track.9) Which is your most preferred genre?10) How was life in quarantine?

She was also a part of MTV Colors of Youth Season 6 that was judged by Benny Dayal and Lauren Gottlieb. As a voice artist, she has dubbed in ads for Brands like Kotak, HDFC Ergo, Spartan Poker and lent her voice for the Character Chanda in MTV’s Nishedh. She has played at venues like Blue Frog, Hard Rock Café, MTV Flypp, Veranda, The Stables, Above the Habitat to name a few. She was also a full scholarship student at The True School of Music for a year. During the pandemic, she hosted a live discussion talk show on Instagram called Midnight Sesh w Maanuni where she had guests like Benny Dayal, Dalip Tahil, Ehsaan Noorani to name a few. Apart from that, she has dedicated most of her time to teaching vocals, writing new music, working on collaborations with producers and fellow indie musicians.

Here is Maanuni in a conversation with GOGO Magazine.

My journey pretty much began just as I learnt how to talk. I started responding to music as a baby and would hum and sing random songs around the house as a toddler. My parents noticed my inclination and natural ability towards music and so they put me in a Hindustan classical singing class at age 4 where I started training formally. A few years later my interest in western music genres began to grow more as I was heavily influenced by Disney music like High School Musical, Hannah Montana, Camp Rock as well as some classic rock and pop stuff my dad would make me listen to like The Beatles, Bryan Adams, Sting, etc. I started singing western more, eventually stopped my Indian classical training, and started training myself in western styles and techniques by listening imitating, and observing. I knew since the age of 5 that I wanted to become a musician and perform on stage in front of a large audience. I’m grateful to be living my dream and moving closer to it and watching it grow.

I’m yet to release my original music (which is in the works) but I did write and record for background scores of Bollywood films, one of which came out last year and was received well by the audience. It’s called You Can’t Break Me Down from the movie Yeh Saali Aashiqui.

I started my YouTube channel in August this year and uploaded a Drum&Bass mix of Wolves by Marshmello and Selena Gomez. A lot of stuff is majorly posted on my Instagram account- @scarlettvictim.

3) How much has social network helped you in creating your audience?

Social media has honestly been a boon for me, especially in these Covid times. A large section of my audience knows me through my social media as I started posting a lot of work on it as well as hosting a live discussion series having guests like Esani Dey, Benny Dayal, Dalip Tahil, Ehsaan Noorani to name a few. I also had the opportunity to go live with some incredible artists like Salim Merchant, Ash King, MTV India, Ehsaan Noorani, Raghav Meattle, and Abhisekh Mishra and that helped me reach out to a newer and bigger audience. Even working on newer projects, getting to know a whole community of artists from all over the world on social media has been absolutely incredible so I have nothing but great experiences to share.

4) How was your experience with MTV?

My experience with MTV was quite interesting, really fun and new because I had no idea how reality shows work, what’s it like to be on a set etc. I got to meet and know Benny Dayal on the show Color’s of Youth, have his guidance and support so that’s a great thing. Associating with and being on a channel as big as MTV can be quite an overwhelming experience but it was at the very start of my professional career so I got to learn a lot there.

5) Tell us about your work in Bollywood.

So this is something that I still pinch myself about to reassure if it’s real or not. Getting to work on Bollywood films has been a crazy experience and something I got extremely coincidentally. I was supposed to shoot a small scene in YRF’s Qaidi Band back in 2017 and was also on set with a band but our shot never happened. 2 weeks after that I got a call from their team asking if I could track vocals for the background score and that’s how it all started. I walked into the studio at YRF an hour after receiving the call, was handed over the lyrics by Habib Faisal (the director of the film also known for his other films Band Baaja Baraat, Ladies v/s Ricky Behl) and got an opportunity to work with Esani Dey and Hitesh Modak who were doing the music. A day after that I got another call from Esani and Hitesh asking me to write and sing/rap for Kangana Ranaut’s film Simran. I built a great working and friendly relationship with them and got the opportunity to write and sing in PM Narendra Modi and Yeh Saali Aashiqui as well in 2019.

The journey, I hope, continues from here and I can’t wait to work on more such incredible projects. Working in Bollywood has really taught me a lot about professionalism, being crisp and well prepared, and getting work done in very short deadlines. It’s been one hell of a ride!

My biggest vocal inspiration has been Demi Lovato. I pretty much consider her and even Miley Cyrus to be my virtual vocal coaches. The majority of my learning has been through observation and I’ve learned a lot from many artists over the course of time. Other influences I’d say would be Logic, Eminem, Alicia Keys, Linkin Park, Adele to name a few. Disney music like Hannah Montana, High School Musical, Camp Rock have been my biggest musical influences growing up. Now, I draw a lot of inspiration from my friends, colleagues, and counterparts from the music scene and that helps me better my craft and get a wider perspective on the type of music I want to make and put out.

7) Where do you see yourself in the next 10 years?

I’m a person with big dreams and ambitions. I’ve always imagined myself going international and playing stadium shows in front of hundreds of thousands of people. Playing Madison Square Garden, being on the Ellen Show, working with Max Martin, collaborating with my favorite international artists has been a massive dream. It’s a big one to have and who knows what life has to bring in the next 10 years (honestly that’s too long a time) but I’d still want to have high goals and put the effort in a way to even try to reach them by half a percent.

I don’t have anything out there but I can tease some information for sure. There’s some new music in the works that I’m super duper excited to share with everyone. It’s music that people will have a fun time listening to, will definitely groove to, and want to keep on their playlists. It will be out soon I hope! *fingers crossed*

9) Which is your most preferred genre?

I have never been able to compartmentalize my musical interests in genres, to be honest. I could broadly say that my biggest influences and interests step from pop, RnB, hip-hop, jazz, electronic genres like synth-pop, trap, house, etc. Genres are so broad now that it’s hard to categorize. I’d love to be experimental with my music and let melodic ideas drive the vibe of the song and not pre-set ideas about the genres I want to make music in.

Life in quarantine was a great surprise. The events industry was hit massively so there obviously were no chances of any gigs happening which at first was pretty scary to imagine. I decided to keep myself occupied by exploring different avenues in the field and started teaching more actively (which was already previously doing for the last 4 years). I started teaching online singing lessons 6 days a week which really helped me in my own vocal training. Apart from that, I hosted a live discussion talk show on Instagram called Midnight Sesh w Maanuni featuring guests like Esani Dey, Benny Dayal, Dalip Tahil, Ehsaan Noorani, Tejas, Vishal Rasquinha, Simetri, and Gravity. This was a massive success and the response was beyond wonderful. Besides that, I started doing more voice over projects for brands and companies. I also got a recording setup at home, worked on online collaborations, wrote some music, practiced a lot, and conducted online workshops. In all, it was a very productive and beneficial quarantine where I really got to grow, learn, and build myself as an artist and as a professional. Looking forward to what’s in store ahead.