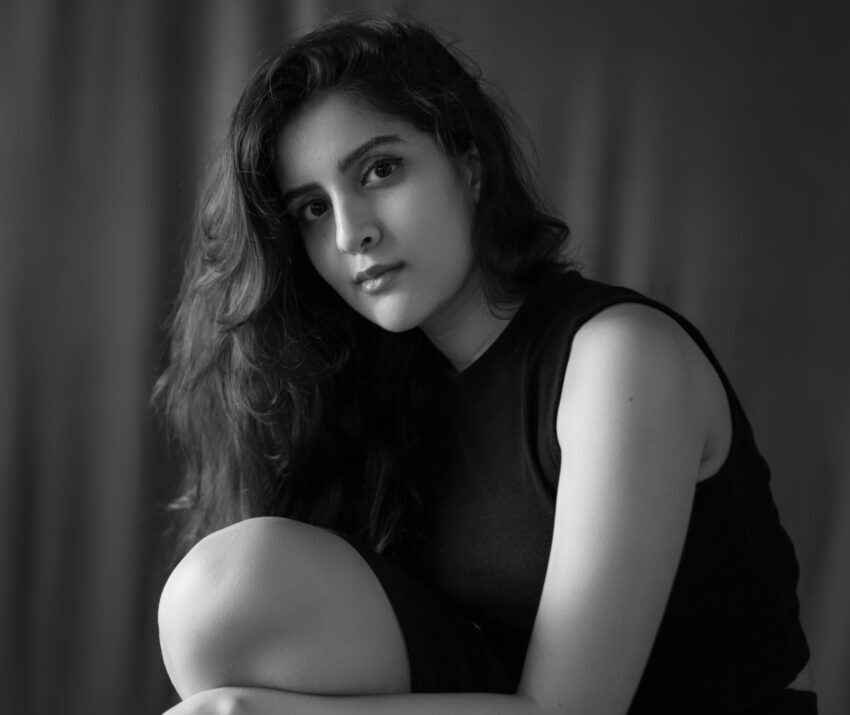 Although Utsavi first started singing in school, music was very sporadic in her life due to her shy personality back then. However, ever since, she has grown to become more confident. She has acquired training in western vocals, and briefly in semi-classical and Gujarati folk too. She started her YouTube channel and performed locally in cafés in 2018 and 2019 respectively. Her love for music stems from her love for writing and the consumption of electric music. Travelling, reading, writing and music are some of her biggest interests. In the past, She has worked as a brand strategist, editor in a magazine, event manager and content writer. She is currently working on more songs that she intends to release in the months to come.

Contents
1) When did your journey as a musician begin? 2) Which was your first song?3) Which has been your most memorable live performance?4) Who has been your inspiration?5) Where do you see yourself in the next 5 years?6) Which is your most preferred genre?7) Tell us about your latest track.8) Tell us more about your upcoming projects?9) How was life in quarantine?

Here is Utsavi Jha in a conversation with GOGO Magazine.

I wish there was a clear timeline as to when I started music. My first time singing and performing was when I was 10 years old. But I was an extremely shy kid and hence tried my best to stay away from music and performing. However, bumping into some English songs in that gap period somehow ignited in me the love for writing. Writing also has always been something I have loved doing and that gave me an outlet. And which is why at 14, I wrote my first English song out of the blue without any kind of training or real immersion in music.Thereon, I began sporadically writing songs, listening to a lot of different music and singing whenever I got a chance to. In my journey, I have also trained in semi-classical, classical and Gujarati folk music. However it was after I trained in western vocals that I truly felt comfortable and felt like I had found the training I was seeking. After that, I started my YouTube channel in 2018 and have been posting renditions of my favorite songs. Moreover, I started performing live in cafes, restaurants, private events since mid 2019. Since then I have released 2 original singles and been writing a lot more very regularly. My parents and sister’s support through everything for my music has been very important and motivating. They give me their inputs, leave me be when I’m writing, bear the home recording noise late at night- they have been an essential part of the journey. And some good friends too who help me with skills for things other than the song itself. The lockdown also gave me a chance to connect with a lot of musicians on Instagram who I get inspired from. It was also a great opportunity to connect with Ehsaan Noorani sir on his Instagram live sessions. He has been a great source of motivation, help and support to my music every time I needed some guidance, and that validation truly pushed me to take action on my songs in the lockdown. Everyday, I try my best to get better by learning more-be it instrument related, vocally or reading/listening more, explore as much as I can and try to give my 100 percent.

Th first song I released on streaming platforms was in November 2020 called Amsterdam/Thousand Miles based on my love for travel and solo backpacking. But the first song I got produced was Picnic which is based on fears. And the first song I ever wrote in my life was known as “I love you” way back when I was 14. It’s a cheesy love song but a memory I cherish too.

There have been quite some memorable and better performances eversince I started performing live. But the most memorable and monumental one for me has to be a show I did in November 2017 with a fusion band called Crossover. I got a chance to be a guest vocalist with that band and sing 5 songs at a Flee Market event on an open air stage. It was the first big audience that I sang to. But when I started singing, it didn’t feel as though it was something that was new for me or something that scared me. I felt truly alive, comfortable and expressive in my full capacity when I was singing songs I enjoyed- modulating, swaying, belting and bonding with my band members. After the show, a little girl even came and asked me to take a picture with her which was a moment I will never forget. The rush and thrill I felt that day is what compelled me to chase it more and pursue music more actively.

A lot of musicians and non-musicians have in different ways shaped the person and musician that I am today. Some of my favorite musicians are Sara Bareilles, Hozier, Arctic Monkeys, John Mayer, Ed Sheeran, Joni Mitchell, Patsy Cline, Leonard Cohen, Louis Armstrong. The common thing between them all is that they are all brilliant songwriters as lyrics for me are very important for me. They have inspired me with their songwriting and expressive singing and motivated me to make music that is authentic.

Apart from them, I draw a lot of inspiration from people around me, be it family, indie musicians I know who work just as hard, people I meet on my travels or people I know about who balance life beautifully and approach life differently. I am also deeply inspired by traveling and my experiences while doing so.

It’s tough to say as life has always surprised me and taken routes and detours that I didn’t anticipate most great ones. I had no idea I’d be actively putting out music 5 years ago even though I have been music for much longer than that. So I am eager to see what happens 5 years down the line especially in terms of music. I just want life to keep surprising me like it has. But if I had to say, it would be that I’d love to have a great discography that has reached ears far and wide. And that I am performing my original music at great venues. I also work in media so I hope to put in time and effort into it. I am ambitious and hard-working across both fields and hence it is fun to see what grows more and what brings more success for me. But I will always try to keep making more music as that is truly my first and biggest love and passion. I hope to perform it live and someday even make interdisciplinary projects myself and make music for feature films.

My taste in music is eclectic because I listen to and like almost everything. But if I had to pick the music that I love listening to, then it would be folk, classics, soft rock, Indies, blues and jazz. I love songs with good lyrics, that really keeps my attention beyond just the first cursory listen. I also don’t think I follow genres while writing so I wouldn’t know which genre my music falls into as my writing stems from so many different places and sounds. But I’d say it would be somewhere between folk, pop, country and soft rock if I had to remotely categorize them.

Picnic is a Blues Rock song that I wrote and composed in the lockdown in June 2020. It is based on the small and big fears that bind us in life and keep us from feeling fearlessly and living happily. I had received some good news back then and my reaction to it was of fear that I may be stupid to feel happy about it when it would go away. This approach to happiness had been a habit and something that annoyed me about myself. That kind of toxic thinking patten really alarmed me, and I decided to not think that way again. And as a closure I wrote this song as songwriting helps me do that.

Also, at the same time, I was exploring a lot of Blues music that I began to love and that made me want to create something in the same genre. Watching Ehsaan Noorani sir’s Instagram live sessions wherein he played a lot of blues licks and encouraged musicians to explore different kinds of music also helped me. All this collectively led me to writing and making Picnic. It was then produced, mixed and mastered by Jason D’Souza who did a great job. The track also features saxophone parts by Anurag Kamle.

8) Tell us more about your upcoming projects?

I have a lot of original self-composed, written and sung songs in the pipeline. Some being produced, some being recorded, some being mixed. In the months to come, you can expect a lot of Hindi and English music from me. I am excited, scared, nervous all together, but also very happy with the momentum and I can’t wait to put all this music out. My next two releases are in the month of March. I’m currently also managing multiple songs together which can get stressful but I’m on top of them to hopefully also group them into their respective EPs.

Very fortunately and by God’s grace, lockdown was quite productive and enriching for me. I got to spend a lot of time with my parents and sister which I love doing. We watched a lot of movies, played games, did karaoke, I read a lot and wrote a lot too. I do not take that for granted as I know many people perhaps had the hardest time. But I also learned how to slow down and focus on things I like. That way, I was able to write a lot of new songs, begin the production process and finally release the songs too, something I had been planning for years and second-guessing too. I am also the kind of person whose interests all need her to spend time by herself so lockdown didn’t really bother me that much. However, I did miss performing live or jamming with musician friends. But thanks to Instagram lives, I found a whole new audience too.