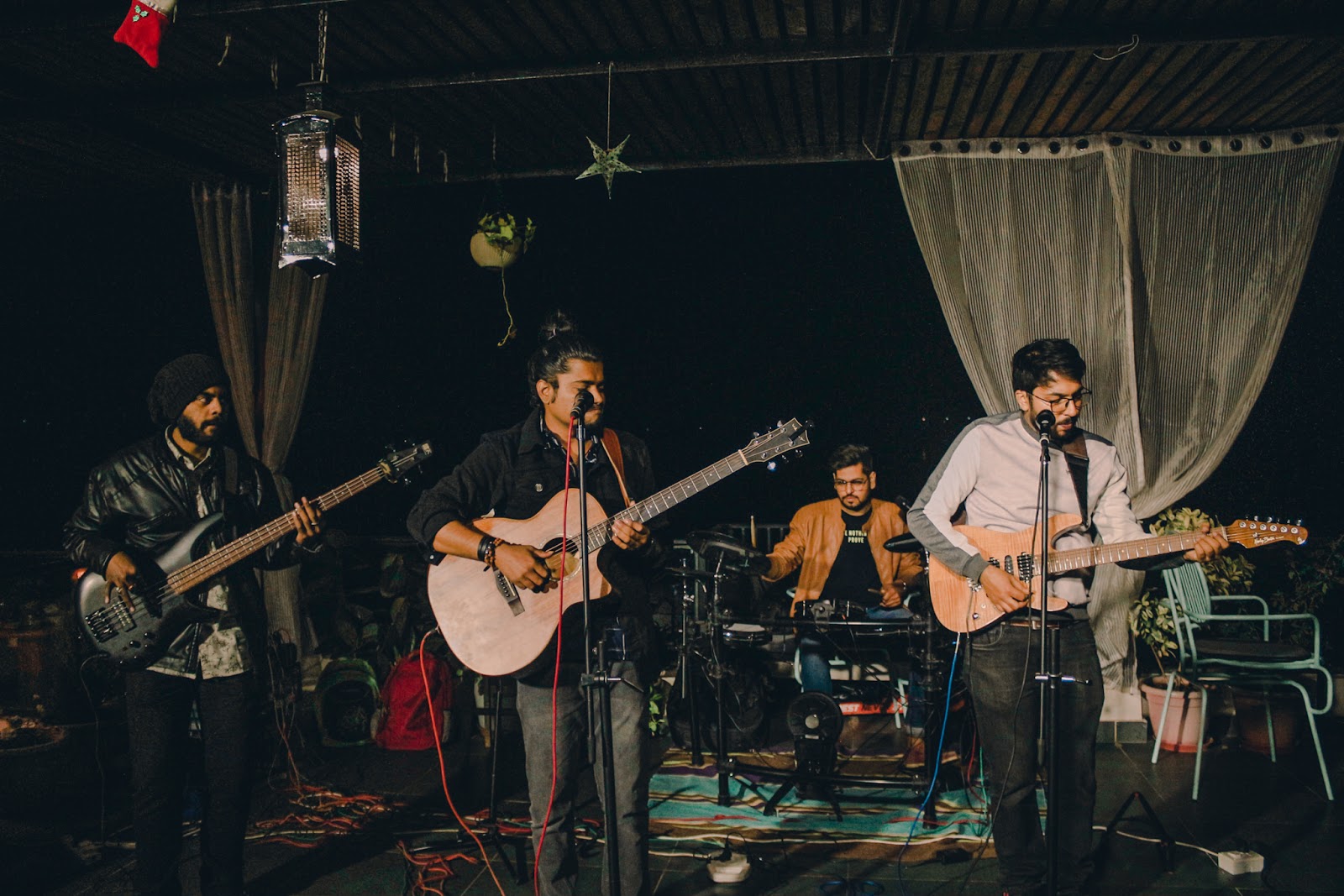 Khanabadosh is a band based out of the beautiful city of lakes, Udaipur. The band is on a journey to create music that echoes through the head and heart of our audience, music which is inspired by real-world events and incidents which the people can connect to, from the soul.

Contents
1) When did the band’s journey begin?2) Tell us more about experimenting with the different genres of music.3) Which has been your first track?4) What was the idea behind the name of the band as “Khanabadosh”?5) Where do you see your band in the next 5 years?6) Tell us more about the different members of the band and how did you all connected.7) Which has been your most memorable project or song?8) Tell us about your latest track.9) Share some of your achievements with the magazine.10) How was life in quarantine?

Their diversified genres of music are the result of the wide array of musical tastes of band members. Khanabadosh never restricted to a single music genre and constantly experimented with new dimensions of a musical ecosystem. Khanabadosh’s music is completely a new approach to modern rock but is combined with many other genres of sound, such as Pop Rock, Alternative, Hindi Rock.

Here is the Khanabadosh band in a conversation with GOGO Magazine.

1) When did the band’s journey begin?

This band was not formed in a single night. It was a process involved in the formation of the band. Almost 6 years ago, Gaurav (The Lead Vocalist) and Arpan (Electric Guitar) decided to form a band. We named our band ‘Live 4 Unplugged’. The band involves mostly in playing and doing covers. After 2 years, as of a sudden, the thought process and the compositional way of the frontman changed, as he started listening to Indie bands and he diverted himself towards independent music, and then we started working on Indie music. We found Gaurav as our Frontman/Lyricist/Composer and Arpan as our Rhythm Guitarist/Production Engineer. So, on this new journey, we changed the band name to ‘KHANABADOSH’. As we were more inclined to our own composition and our sound was also way relatable with the Independent music of India.

Let us share with you an inspiring reality that kicked us to become what we are today:

One day Gaurav came across a performance of the INDIAN OCEAN at the Udaipur Music Festival in 2016. The first music festival that I witnessed, with the audience singing aloud, swaying their heads to the energetic music, lost in the exhilaration, truly blew off the water! That is when I dreamed of forming a band by ourselves. Until then, we had only been listening to the ever-present Bollywood music, trying to cover the classic compositions to the degree that our compositions ended up reflecting the lamestream lyrics and melodies. The Udaipur Music Festival introduced us to the concept of independent music and then onwards our playlists were filled with artists such as Sifar, Raghu Dixit, Strings, Papon, Bipul Chettri, and The Local Train. Listening to their music changed a great deal the way Gaurav approached songwriting and composition. But composing by ourselves was not enough. We could choose to be singer-songwriters but we knew that we needed an impactful/wholesome sound which could only be possible through a full band setup. And to stand out, we needed to offer a distinctive identity to the band, which would only be possible through original music that pierced through the hearts of the audience.

2) Tell us more about experimenting with the different genres of music.

We are always enthusiastic to explore every genre of music. We are not genre-specific, but our music is best defined as Alternative Hindi Rock/Pop Rock. We have songs almost in every mood and genre, So with time, our genre keeps changing but our music will remain the same and give our listeners a worthwhile experience. Frontman Take: Honestly, if you ask me I will say the genre is ‘All about my life’, ‘Your life’, and ‘Everyone’s Life’ as somehow somewhere we are going through the same situations and phases of life.

When we started there were just two of us (Gaurav & Arpan) and the first song we released was ‘Tu Ayegi Kabhi’ in 2018 but after the band formed completely, In Sept 2020 we released our debut EP – Kaala Dil during the lockdown.

4) What was the idea behind the name of the band as “Khanabadosh”?

Khanabadosh defines a person who has no place to find the real meaning of life, in the struggles of the world, in search of peace, getting lost in self while loving others to reach the point where its own rules are meaningless.

(In the best words we have written and defined)

5) Where do you see your band in the next 5 years?

We are looking forward to releasing a couple of albums, some videos, and performing on big stages, also our goal will be to unleash the sound of the band and explore the journey of being a band. We just want to keep it consistent and keep making music and thrive for more knowledge and skill so that we can be better as artists and as humans.

6) Tell us more about the different members of the band and how did you all connected.

The band was formed and founded by Gaurav Solanki & Arpan Jain in 2018 (As Khanabadosh) and later in this journey, we found our new mates as After a few years, Our bassist, Divyansh Shama joined in and then our Lead Guitarist Engineer Kartik Ganotra came in and joined the band.

There are four members in the band are as follow:

Actually, in 2019 Arpan moved to Delhi to get a diploma in Music Production from the college SACAC and there he met with a lead guitarist Kartik who was his batchmate and they started rolling up together in Delhi and thus we all met and we are together till now.

Kaala Dil is our favorite project so far. It includes 3 songs VAQT, RANGDEH & FIZOOL HAI SAB. and we tried to cover the Hindi rock, Indie pop, and Alternative Rock genres through these songs. The music is soul-lifting and we tried to achieve a new sound in Independent music.

This EP (Extended Play) took us 2 years and was finally released on Sept. 18th, 2020. We faced many obstacles during the journey of making these songs like the financial crises, especially during the lockdown to the band’s internal hassles of all the band members living in different cities, production to resources shortage, and so on. Hopefully, now the upcoming band projects won’t take 2 years! But still, after listening to the final versions of all the 3 songs, we can say that it was worth all the time, patience, and Struggle!

Our latest single is ‘Bayaan’, released on all the major streaming platforms across the world on 14th May 2021. Bayaan denotes the undaunted determination towards difficulty, danger, or disappointment. It keeps alive the spirit that no matter what impediments come your way, you shall rise and shine. The world may look down your nose, detest your thoughts and actions, but amidst all the overwhelming pain and hate, you learn to fight. Bayaan is the energy to resist, to protest, to speak for yourself, and do what you love.

1st and foremost, our Debut EP Kaala Dil got an amazing response from the audience on both the platforms YouTube and Spotify, which was quite an achievement for us being a debut band. Secondly, our debut EP also got covered by The Rolling Stones, Radio City, IndieGaga, and many other major platforms. The latest single Bayaan also got featured on The Rolling Stones, Rock Street Journal, and many other platforms.

Coming to the one more big break, on Feb 22nd, 2020 we performed in an International Storytelling Festival called ‘Udaipur Tales’ in a super amazing lined up along with Piyush Mishra, Mukt Band, and other acts. It was the 3rd edition of the festival and this was the first time when a band from Udaipur itself was featured in the edition as an exclusive act. It was all unexpected but we will always be grateful for what we have achieved until now.

It was all so sudden, No possibility for organizing live gigs or concerts. The lockdown phase did hit the Independent Musicians like us really hard, both financially & mentally. We tried to keep it productive to everyone’s end and so we were busy doing practicing, composing songs, and working on ourselves to keep everything in a positive mental state. Like we said our debut EP Kaala Dil was actually released last year in lockdown so this EP was recorded in January 2020 and when suddenly due to covid lockdown happened we thought to work on it when everything came to a halt pandemic and we faced major financial constraints but we keep everyone engaged to this and released our DEBUT EP ON 18TH SEPTEMBER.

Yeah, it was really the hardest time for everyone out there especially the artists, and there was nowhere to go, we faced a lot while fighting with inner tantrums but yeah we kicked it, we pushed ourselves, we tried learning new things musically, and thus survived.