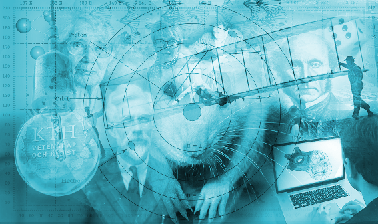 The more estranged they seem the more intertwined they are.

Is it just my observation or you too feel that science can’t be separated from other disciplines as the observation of one might lead to a path-breaking discovery in some other field. Philosophy is synonymous with being wise, it’s a systemic & a results-oriented approach to a calibrated thought process. It’s a science of understanding rather than merely knowing. Similarly, science is an art of putting that understanding into perspective in a way that can be liberating or caging. Yet it’s true that however, science delivers innovations on the ground, philosophy justifies what we make of these innovations for the long run. In science an old thought if has been discarded through experimental verification (which is always the case) would find relevance in texts only, one would likely to use the recent version of a theory or any machine evolved over time. Why would you use the CRT desktop when you have far better technology right now? Why would you use the 2 G phone when you are advancing for 5G technology? But in philosophy, if you don’t agree with some of the progressive ideas of our time and you find some ancient thought compatible to bolster your thought process you wouldn’t be a Luddite, however, you might lack the competence in some contexts but that’s a matter of your resolve & vision towards it. If someone doesn’t believe in the idea of democracy even in the 21st century he can be an ardent follower of Socrates! But scientists have developed a philosophy of their own over the time they live & are remembered in the aftermath. There were times when classical physics tended to explain everything that could be explained at that time. With the advent of the early 1900s the principles of classical physics began to be scrutinized.

In 1865, Maxwell proposed the electromagnetic nature of a light wave,  in 1905 Einstein published his research paper on photoelectric effect suggesting that light is made up of masses known as photons which further are responsible for the nature of light & it’s behaviour. Then quantum physics began to hold a firm ground with a very simplistic corollary that we get to know a phenomenon better when it’s observed with a microscopic vision all the minuscule details can be put to explain things we think don’t exist. Quantum physics deals with the subatomic particles pertaining to the dual nature of matter. How we observe things also became significant as propounded by an Irish-Austrian Irwin Schrödinger. He forwarded the idea of Copenhagen interpretation of quantum mechanics that an element or matter continues to remain it’s quantum form unless is disturbed by an external observation. This idea seemed preposterous to many physicists that the nature of things is dependent on observation & they get altered through the same.

Einstein even said to his friend ” Do you think Moon only exists when I look at  it”?

Irwin witnessed backlash from many of his contemporaries but his theory was based on a concept of consciousness as an intact independent entity not what neurosciences confirm its proximity to be coinciding with their outreach. Irwin believed in consciousness, common to all by virtue of which there aren’t a billion worlds but only one. He was influenced by Indian philosophy depicted in our Upanishads, the idea of atman & brahman as being the sole entities which are binding together the differences into one soul and one consciousness.  According to Subhash Kak’s book The Wishing Tree (2008), he even named his dog atman. He was exposed to the study of Upnishads in 1918 through the German writings of Arthur Schopenhauer he even said  ” In the whole world there is no study so beneficial and so elevating as that of the Upanishads. It has been the solace of my life. It will be the solace of my death.”

Albeit at the same time he rejected the claims that he had adopted the philosophy entirely into his theory of explaining the quantum nature of electrons or the possibility to locate them.

”I do believe that this is precisely the point where our present way of thinking does need to be amended, perhaps by a bit of blood-transfusion from Eastern thought. That will not be easy, we must beware of blunders — blood-transfusion always needs great precaution to prevent clotting. We do not wish to lose the logical precision that our scientific thought has reached, and that is unparalleled anywhere at any epoch.”

He was critical of many Indian ideas. Yet he explored things through Upnishads & sought to find answers too. Similarly, Heisenberg visited Rabindranath Tagore & came across Indian philosophy. Robert Oppenheimer learnt Sanskrit to read the Bhagavad Gita in its original form.

It can’t be suggested that Upnishads helped  Schrödinger to form mathematical equations but they soothed his soul & he widened his vision. It opened many corners of his intellect he’d wanted to unveil. Philosophy inspires and may strengthen the utility of thought & consciousness.

Science & philosophy are so different but at some horizon far above the ground in an absolute space appear to meet & greet each other with their bountiful unity to eternity.