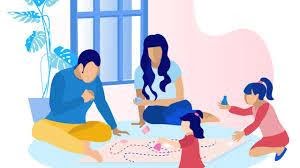 Covid-19, a Pandemic that did not put one nation but the entire world on standstill. Social distancing not only became a hashtag in fact a way of living, especially thanks to the evolved technology the world somehow found a way for its existence and is surviving at its best ☺

I remember the initial stage when the sparks of this virus were taken in an easy-breezy manner thinking in no time this too will be defeated, in other words, according to me, we were only patting our little human ego brushing away the truth and standing far away from the reality of the ongoing pandemic, as it was here not as a guest, in fact, to stay by doubling its repercussions in leaps and bounds.

2020 indeed has been a challenging time for all of us irrespective of their social status or religion #weareinthistogether has become the hashtag uniting the whole world, encouraging nations to lend out their helping hand to each other in every way they can, especially the ex-pats or tourists.

Being an ex-pat living in another country, we thrive to earn our livelihood for our children and ourselves, so despite heeding the news about the corona we continued living our lives and of course, with all the precautions needed. The eventuality of the spread of the virus kept rising so did our worries, but still, the occurrence of the cases was under control, so my husband and I had to maintain our daily routine to earn a living as we were not sure what the future held for us in these uncertain times.

Kids on the other hand could not contain their excitement as the schools had announced an early mid-term break, they could enjoy watching television at home as well as those extended park time with their friends. Fortunately, being the leap year, Dubai Parks and Resorts celebrated by selling the tickets at AED 29, a deal any and every person grabbed with both their hands. We also took this opportunity and enjoyed a nice family day. Little did we know that it would be our last outdoor activity before we stepped in the so-called “quarantined life”.But, as the days went by and the cases kept increasing, I had a different set of problems to deal with, it all began with the demise of my Grannah (That’s what I used to call her), at that point in time the only thing I wanted to do, was catch the next flight and go home to be beside my mother at that grieving hour, but till then a lot of the airports were shut down, so after considering all my options, I decided not to travel. And the cherry on the cake was that my maid decided to walk out on me, and I had to juggle time to find a maid, go to work and take care of my kids. And as I completed passing that hurdle, it was announced to imply the concept of the “Work from Home” policy. And hence began my …..

I’ll be honest initially, I did not have a problem for the whole work from home concept, it was all good and that is because I was blessed with house help. So, as a couple, we cooped ourselves away in one room working and my kids were taken care of and so was the cooking and cleaning. The real challenge began for me when there was a curfew time set by law when we needed permission from Dubai police to go out, even for basic grocery shopping. That’s when we asked our house help to follow the “Stay Home Stay Safe Policy”. Just as I was realizing my true potential as a multitasker 😉 my luck was lurking around the corner to smash me with another blow – Online sessions for my kids.

My first concern was to have two separate devices for them as their sessions clashed with each other. Initially, we managed by giving each of our laptops to them, but fortunately, we hit a jackpot when we discovered my hubby’s old laptop 😉. Now that they had a device each, the next stumbling block was to sit next to each of them as it was impossible to keep their tiny minds focused on the screen. I was like a Ping-Pong ball between both my precious and at some point, during the day, my brain felt soo dizzy from all the running around and their online sessions, that I always goofed up either their answers or their attendance.

Just as I could wrap my head from the dizziness from my sporty morning, my next fence to cross was “What should I cook today?” A question that haunted not only me but every single woman who was staying at home (I’m guessing).  My whole meal schedule went for a toss, as I could only enter the kitchen during breaks, I got amidst all the sessions. Luckily, the dad assisted them with the Math’s class and that helped me cut off a little slack to focus on running the rest of the house chores. Just as I cruised through these perplexes, the toughest hassle was to keep pin-drop silence in the house without the help from the wondrous devices, as my husband had to conduct webinars with an audience of ninety.

With the adventurous activities happening around me, I also had to play the role of a working mum, so amongst the various on-hand tasks at home, I always had my laptop beside me making sure that my work life was on point. Never did I realize that I could master the art of multi-tasking so well 😉 Yes, indeed it was a roller coaster ride for me and #socialdistancing was tough, especially for someone like me because being an extrovert I prefer having conversations in person instead of behind the screen of a laptop or phone but since we had to maintain our distance that little screen was my escape to the outside world.

The economy of every country was under scrutiny, every business was going through heavy losses, just then a law was declared that the companies could reduce the salaries and cut back on staff and many of them implied the law immediately. This law might have been advantageous to a few, but not to the ones who were on the other side facing the brunt of it. People still had to take care of their fixed disbursements.

We personally had to deal with salary reduction and I did not earn a fancy salary, but it was still enough to suffice our daily payments. The income was restricted but the expenses were still as demanding as they ever could be. As the days surpassed us so did the series of unfortunate events, I lost my job due to the current economic state, so now overseeing the budget was relied on only one earning half which also happens to be my better half 😉.

It might be believed that we spared our expenses while we were secluded from the outside world, but on the other hand, it was quite the opposite we landed up spending a heavy chunk every week on groceries. Along with that we also had to keep constant provisions of nibbles ready for our little hungry munchkins 😊 Food was not the only factor that we needed to consider, we also had to take care of the basic household necessities, for those we used to go to avail the best deals at the luxury of malls but now we had to spend “Deal or No Deal” so savings was a becoming a faint concept. It looks like even my funds are maintaining #socialdistance from my fund account.

PROS TO THE CONS

This cloistered life was not all devastating, I saw our family come together and tackled this challenge head-on (pun intended). In the evenings we invented new games, created new artifacts from recycled materials, sharpened our culinary skills, since we could not enjoy the brush of fresh breeze on our faces we set up an indoor picnic spot, watched loads of movies with popcorn along with marshmallows and various other candies 😉. It is good that our generation grew up without the comforts of electronics, so today to keep the kids busy with the art of role-playing was not as difficult as I thought it would be, all I had to do was eat imaginary dishes that were never heard of and I pray, should never be heard of 😉,  and be a patient with various ailments. It was a remarkable time that I enjoyed bonding with my kids without the help of technology which was simply overwhelming for me.

I was in awe of how well my youngsters grabbed their wits around the current situation, how curious their minds were to know the current affairs of the country. My son comes to me regularly demanding to know the updates occurring all over the world. When they speak up it is an amazing feeling to hear how well informed they are as to why they are living a quarantined life and today also when they hang up calls they make sure to add “Stay Home Stay Safe”.

We humans always wished for a long-lasting weekend and we got one but on very different terms. We wanted to lie around all day in bed “SNAP” we got that wish granted too only to walk in our house into the wee hours of the night like a zombie, we wished to be couch potatoes and dare I say we did become that even our clothes started maintaining social distancing from us 😉

So, Covid-19 has taught us that wishes do come true, but at a very heavy price.

Posted by Zinnia
Follow:
Creating my own sunshine !!
2 Comments 2 Comments