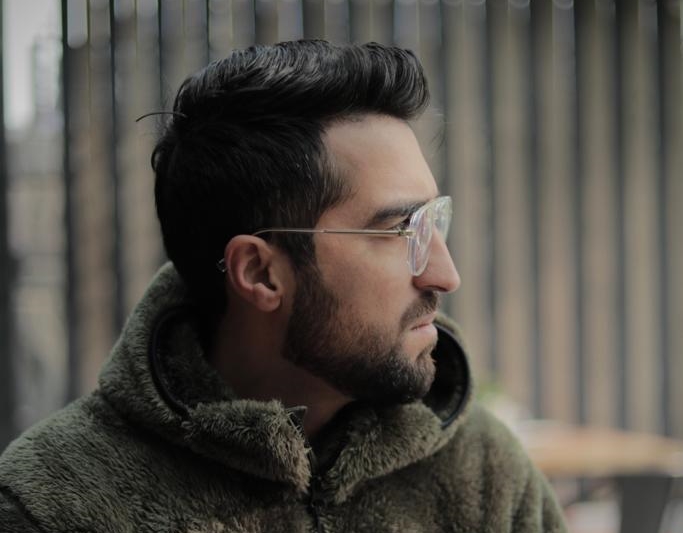 The girl in the blue Burqa,
A swaying burqa,
Amongst the orchards of Kashmir.
A dancing teasing blue,
Matching the succinct sky,
And I stop midway in my doom scrolling on insta,
Because that picture, that photograph was not some mindless recreation of copied work.

It was lit. Literally, It was a piece of photographic art a vision through the lens. I went onto the Instagram account and found Isam Wani. Not a surprise that he is a Kashmiri photographer (considering the advantage of stunning landscape) but what surprised me was his play with the Blue Burqa and the imaginative and unique perspective of the landscape that has indeed produced some of the best photographers but then again also makes original photography a tough challenge.

Knowing Isam has been an equally surprising journey—a man full of creative surprises. Isam is one of the finest drone pilots in Jammu and Kashmir and after his training in Mumbai has worked with several film crews and high-end projects for Conde Naste Traveller and BBC. Apart from these Isam’s clientele has been.

He is also one of the empanelled members of the Jammu and Kashmir tourism department for their online data. Hailing from a family that is very active in the hospitality industry Isam chose to tread his own creative path. Though the uniqueness of thought probably is a legacy since his family started one of its kind glamping resorts in Kashmir—“Ahsan Mount Resort”, and the speciality multi cuisine restaurant in Srinagar city called the famous “House of Habibi” apart from other very unique firsts in Kashmir.
With more than 12 years of experience and after several exhibitions Isam is yet again reinventing and reimagining the Kashmiri. Landscape with a Burqa. A beautiful handmade garment which belongs to his forefathers.

In my research, I found that In ancient Greek and Persian empires as well as in Mesopotamia, around 1400BC, the veil was used as a way of differentiating between respectable ladies and others. The rich and higher-class women were expected to cover themselves and Burqa was a type of veil later started with a religious attachment to it.

Talking about the natural blessing of a beautiful landscape Isam says that years of turmoil have been in certain ways a blessing for Kashmir as the youth were forced to concentrate on work and artistic pursuits and were left with no choice but to think out of the box for survival.

Also, the influx of the 4G networks has given a boost to the creative people of the land with easy availability of international tutorials and online classes and exposure to hone their skills. Photography is a major part of the landscape because 70% of the income of this beautiful valley is from tourism and of course photography either of people, places, or holidaymakers are a major part of it. In fact Isam spoke about the increase in a number of pre-wedding and destination wedding shoots in Kashmir along with a heady inflow of film crews as well.

Talking about his bucket list —Turkey Cuba and the Philippines, he has excitement in his voice and I’m excited as well knowing that he will do wonders with his creative vision there as well. Discussing the details of his photography gear.

*Canon 1DX mark2, Sony A 7
*Kit lenses, Prime lenses, Cine lenses
*2 Drone Dji phantom 4K
*Camera Gimbals and Dji Osmo 5
*Tripods and motorised sliders
*Lights including both outdoor and indoors.
*Our drones are operated by one of the finest professional pilots and photographers with years of experience.

By Deepika Kochhar
Follow:
Cliched totally— Traveller by passion Jewellery Designer by profession And A wordsmith by hobby😊
2 Comments 2 Comments