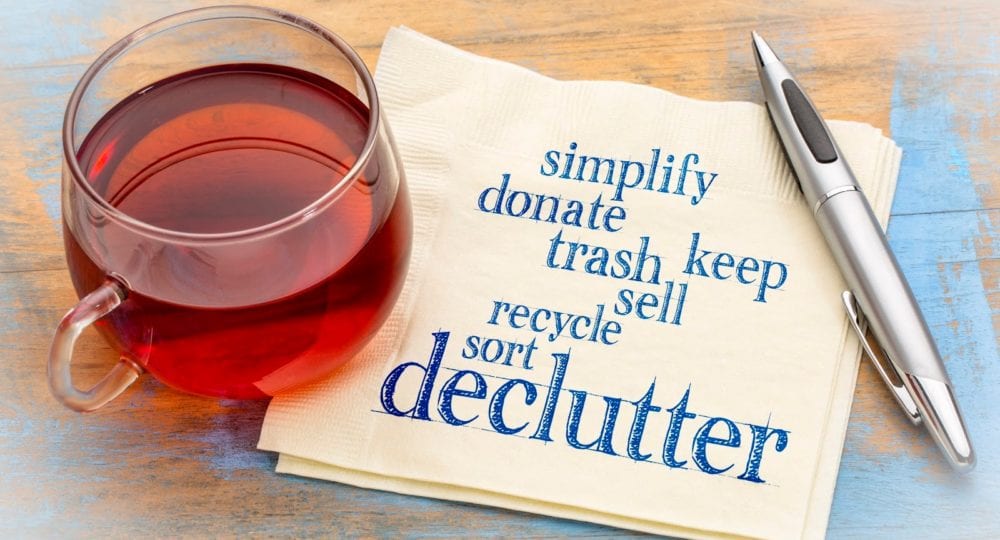 Today I thought of writing on decluttering because I am a compulsive person when it comes to organizing everything around me. But when you get little toes in your life following you everywhere like a mini-tornado, the organized life is lost forever in the vicious swirls of the tornado. You put the clothes in with one hand and they remove it with both their hands but in my case, they’re four hands and don’t even get me started on the proficiency and perseverance they give in creating that mayhem.

So eventually, I had to give in to the mess around me. Not only the mess but being a mom I did not know when to let go of those small baby clothes nor the toys. Then came a time when I had a butt load of things and no space, and being the compulsively organized person that I was, I had lost my inner peace and my mental sanctuary among the humungous piles of what I thought were memories, but was nothing but the reason for the unstableness in my life. Everything was teeming from everywhere; it was like an unrelenting leak oozing out of every nook and corner of the house. I couldn’t segregate the present from the past, and that is the time I decided that to De-clutter my life.

Apparently “Easy to say Difficult to do” was the perfect phrase when it came to letting go of things but the voyage of what I went on while decluttering was a purging process of both my house as well as my body and soul because the clutter was the one chaos in my house which was draining out my positive energy and instead filled me with sheer negativity of fear, hopelessness, shame, and anxiety, but I was ready to say my goodbyes to the clutter as well as the emotions it filled me with. I learned my first lesson the hard way that overthinking a situation or a decision only leads to analyses paralyses which eventually lead to no decisions being made. So, like every other individual, I started my share of research, watched tons of videos as well as read numerous articles so it would help me sketch out a plan to go ahead with my declutterathon.

So, I charted a plan that suited my needs as well as in a way so I could be at the beck and call on my kid’s demands. So I kept my plan simple and easy either throw or donate. Come on, we all have that one dress which we want to fit into and will make it happen one day but that one day somehow keeps getting delayed, let it go buy a dress that will fit you to the T. Stop hanging onto that one day I’ll do it rather live in the present day that you’ve got on hand. Donate the toys to kids who are in need, our kids played and grew up they will never go back to playing with them. Throw or donate the vessels you’re not using if you’ve not baked in two years, sorry to burst the bubble but you never will. Wires like themselves only get the entanglement along with them to test the ones which work, label them, and throw the ones which don’t work. If that one day has not happened till today, that means it will never ever happen, ever moms, EVER.

I did have my share of war with my house, it was just not ready to give in nor was I. When you start cleaning don’t go cuckoo and shoot for the stars. Make short term goals, plan your way through it. Prepare yourself a challenge of 30 days. The best part is, do as you will, don’t go around following people so much that you land yourself in a bigger mess than you started with, trust me I am speaking from sheer experience. I picked one challenge and did not go to the next until I was done with it. If you don’t want to part things over one thought then make a box for later and put it for the last day. Honestly, I had two such boxes and not the small ones the absolute huge ones. But as I was finishing every challenge every day and I saw my piles of mess turn to dust it was one step to easy for doing the rest. And by the time I had come back to those two boxes, it was easy to let go. But not necessarily you have to do what I did, you can have one box in storage …. After all, we are humans wired with emotions.

Correspondingly, the way you declutter your house you also need to declutter your life. I strongly believe in positive and negative energy. We need to push out positive energy for the positive ones to come in too. We are surrounded by an aura, any uproar to it can cause disruption in our lives too. Well, what I learned was that we all have friends, family, colleagues in our life, but are all of them that important to us, do we have to make everyone happy and do we have to show a perfect life to all. NO, we DON’T. We have enough problems to deal with our personal life as it is and to have add on of others, is not worth it. Declutter your life of such people who judge you, having a handful of positive and happy friends around you is a thousand times better than having the negative ones around you. Having less does not mean you don’t have enough it just means you have what you need in your life.

I do not want to dictate you’ll the ways of doing it. Because according to me decluttering is a process that will differentiate from person to person. But I am sharing you this experience because what I realized was that, as we subtract our life of the worthlessness of the past, we will be adding more and more space to add the irreplaceability of the future.

By Zinnia
Follow:
Creating my own sunshine !!
2 Comments 2 Comments