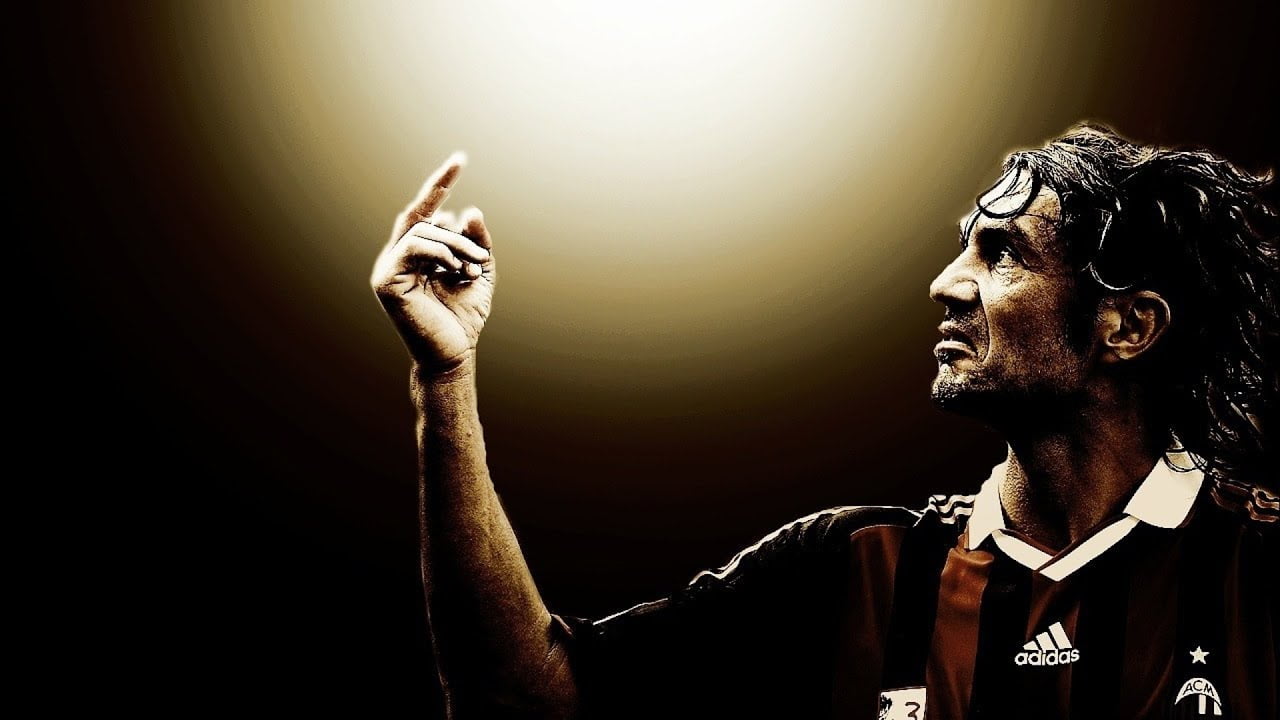 “Maldini went through the entire 90 minutes without tackling. That is an art and he is the master of it. He is a great player.”- Sir Alex Ferguson

If defending is an art then Maldini is the Picasso of it. The Azzurri started his career at AC Milan during the 1984-85 season against Udenese, the left-back had a lot of responsibilities on his shoulders as he was the son of club legend Cesare Maldini. Paolo opted for the No. 3 Jersey which his father donned as a Milan player. As a young player he had all the qualities to be one of the best with exceptional aerial abilities, amazing passing and adept nature of both feet established him as the backbone of the Ac Milan defense.

Many players tend to move from one club to another for new challenges but Maldini was one of the rare species of players who played for the same club throughout their career, the ‘Il Capitano‘ spent 25 seasons at AC Milan winning numerous titles as player and captain. The best being the Milan side beating Johan Cryuff’s Dream Team, which at that duration of time seemed a humongous task. Maldini made his International debut in the year 1988 for the Azzurri side, with whom he appeared in four World Cups and three European championships. Paolo Maldini never won an international title with Italy but played the 1994 World Cup final, where the dream was shattered by the iconic penalty miss by Roberto Baggio. However, Paolo Maldini made it to the Best XI in every tournament he played representing the country which personifies the importance of his presence in the squad.

When talking about trophies won by Maldini in his playing days there ain’t any which he never won for the club, but failed to replicate the same for the country. Having won five Champions League in 1988-89, 1989-90, 1993-94, 2002-2003 and 2006-07 alongside 7 Serie-A titles he had a title laden club career winning 25 Trophies in total including a Club World Cup as well. Individually he was almost crowned as the Ballondor on two occasions where he came third in the years 1994 and 2003. With an exceptional amount of determination, his career spanned for a long 25 years which is not very common in the physical world of football. Maldini made 902 club appearances for AC Milan making him the player with most appearances for the club ever. Maldini was not only able to be at par with his father but went way ahead of him to establish himself as one of the greatest players to serve AC Milan. The respect and loyalty was reciprocated by the club when it retired its No. 3 jersey to honor the great Maldini.

If I have to make a tackle then I have already made a mistake.” Paolo Maldini

This quote by Maldini explains his temperament and attitude towards defending which unlike other defenders was very different. His analysis of the game and pinpoint man-marking gave him an upper hand on the attackers therefore he hardly required to make tackles. During his career, he played against the most legendary forwards like Maradona, Ronaldo,  Messi, and Cristiano to name a few, yet he proved one of the toughest opponents to go pass through. Later down the career, he switched from the left-back position to a center-back role which is not so easy to adapt but with the experience and adaptability he possessed, he settled in the new role.

Franco Baressi was the role model and the inspiration that made Paolo Maldini one of the best in the business. “He was a reference. He was also very good with the ball. Very, very good. It is very hard to find a good defender who is strong and good with the ball. Very hard.” was his response on who influenced him the most as a footballer in an interview with Jamie Carragher. Although beginning as a left-back, Maldini exhibited the game intelligence and defensive attributes to serve equally well, or perhaps even better, as a center-back and, when he moved there to partner the captain, the pair formed an indomitable partnership. There’s little doubt that having Baresi alongside him, eight years his senior, was a massive help in developing Maldini’s play at the heart of the defense. Having a mentor of that stature alongside him meant it was inevitable that all of the skipper’s good habits would be picked up and built on his already outstanding abilities.

The current generation did not see Paulo Maldini play live and the legacy he left can be seen in many of his videos on YouTube but unlike other defenders, you need to have that knack for the technique in football in you to understand how strong Maldini’s style of game was. His love for Milan is such that though he ruled out the option of coaching and managing the club yet he served at the club as sporting strategy & development director from August 2018 until he was promoted to the role of Technical Director in June 2019. Apart from being the Technical Director he also is the co-owner of Miami FC since 2015 and aims to provide the club with Milan like facilities and infrastructure. His younger son Daniel Maldini made his senior debut on 02 February 2020 for the AC Milan side carrying the torch of the legacy of footballers in the family. Today’s top footballers are all in awe of Maldini, whose aura and legacy goes far beyond just the football field.  Il Capitano represents a beacon of footballing quality married with the best human qualities on the football pitch, and Maldini is considered one of the ultimate authorities on any topic in football today, even though he chooses not to involve himself in football on a daily basis after retirement.

“If as a child I had written a story, the best story that I could imagine, I would have written as indeed is happening to me.” Paolo Maldini