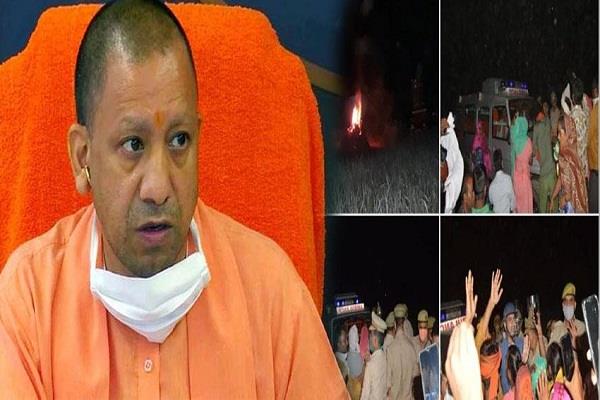 Before I tell you about this case, I like to tell two statements of U.P CM. Yogi Adityanath he said and I quote “Women are Not Capable of Being Left Free or Independent” and the other one “If something bad happens to a Hindu girl we’ll do the same with 100 Muslim girls” He made these statement before he was the CM of Uttar Pradesh, now let’s continue with the very sensitive and important topic.

Contents
HATHRAS RAPE CASEWHAT HAPPENED AFTER THIS CASE?POLICE ILLEGAL ACT WHAT IS WRONG WITH ALL OF THIS OPINION?WHAT CHANGED?GOVERNMENT FRAUD IN WOMEN EMPOWERMENT

The incident happened on September 14 the victim and her mother left the house at 9.am as usual for cutting grass, her mother was cutting the grass from a distance, also she is hard to hear and suffer from the pain in the ears after the mother was done with her part she stand up and look around in the fields for her daughter, she thought the daughter went home, but then she spotted her chappals and the saw the footmarks, the sign of dragging, she follows the footprint and at a distance, she saw her daughter naked with several injuries, Fractures, bulging eyes and blood in her mouth and in her vagina, at first she cover her with pallu and shouted
After that, they admitted her in a local hospital where she regained consciousness and spoke with her family. And mentioned one guy who did this inhuman act, he was Thakur, after 2 days the police shifted her in JNM medical college as her condition was critical, till then still, the police didn’t register the FIR against accused and didn’t do the medical examination of the victim, the victim stayed 7 days in the general ward.

On September 22, the victim named Luvkush, Ravi and Ramu as her assaulters, along with Sandeep, following which the police added the IPC section related to gangrape to the FIR. While Ravi and Luvkush were arrested on September 22 and 25, Ramu was arrested on September 26. On 25th September, the forensic samples were taken by doctors AFTER 11 DAYS, the examination was done and then keeping into consideration her medical condition, On September 28 Monday, she was shifted to the Safdarjung Medical Hospital in Delhi, where she died on September 29.

WHAT HAPPENED AFTER THIS CASE?

Technically this case came in discussion after the victim’s death, many students, activist and CM Arvind Kejriwal gathered in Jantar Mantar for protest against UP government, they wanted to protest at india gate but it couldn’t become possible, many congress MLA’s and other political parties criticize the CM Adityanath and demand his resignation . All over the country people actually started focusing on this important issue, but Adityanath didn’t reponded and when he did he wrote that PM modi calls me for the Hathras case and I’m forming an sit for fair investigation and giving job and 25 lakh rupee to victims family. This make the people even more angry that, for addressing this important issue Adityanath was waiting for PM’s call.

Around 3 am on September 30, Wednesday, photos and videos from the village surfaced online, which showed a lone pyre, without any family members near it. Reports stated that the police allegedly barricaded the victim’s family inside their home and burnt the body. “It appears that my sister has been cremated; the police are not telling us anything. We begged them to let us bring her body inside the house one last time, but they didn’t listen to us,” the victim’s brother told news reporters.

After this act, many known personalities give their opinion including political leaders, in between Rahul Gandhi and Priyanka Gandhi wanted to meet the victim’s family but the UP police interfered and stopped them and arrested, as a result, many congress supporters protested all around Uttar Pradesh. After this many police officials video surfaced online where they are giving threads to victim family for changing their statements as a result Allahabad HC registered a suo moto case against the government and ordered police officials including dgp and dm to present at court at 12th October after this UP government suspended those official, many believe that government is trying to save those officials because HC ordered to be present in court by designation not by name. On the same day, medical reports of the victim was released where they stated that there was no sperm semen found in victims vagina, as a result, CM yogi PR pushed that there was no rape was committed, and further they said victim family mislead us but many experts believe that semen not found because the police taken the medical examination after 11 days. But official said the medical examination was done within a week

Today UP government has given the permission to opposition leaders to meet victims family after many criticism and Rahul Gandhi, Priyanka Gandhi has met the family. After this incident 24 raps cases, and 72 harrasment case was registered all over the country, This show that those who committe these crime are really not affected by law and public opinion

WHAT IS WRONG WITH ALL OF THIS OPINION?

According to a report every time something like this happens government just promise to open fast track court, even at a place where a special court has already existed this gives more backlog to the judiciary, according to a survey in Delhi there are 71 special judge out of 241 judges, This just gives more load and backlog to the judiciary system. What we do whenever a social problem like this happens, we always demand the change in legislative and judiciary grounds we demand Increase punishment. Strict the law, opens new courts, Procedure simplification but the question stands, is all of this actually working, is rape cases are decreasing, the straight forward answer is no, by doing this we forget the root of these crimes and the Government always get away from these important questions by just satisfying the public opinion that’s why these problems never stops, instead government should focus on the thought process, mindset and education

According to a survey in lower courts death penalty has increased 53% since 2016 just to satisfy public opinion, and the same happened in 2019 where government included the death penalty in protection of children sexual act

On 2019 a report was published where they stated the government funds of Beti Bachao Beti Padhao Abhiyan, it says government invested 200 cr in this program where they spent 120+ cr in the advertisement. On 2nd October a media house published the stats of the Nirbhaya fund, Nirbhaya Fund for projects for women safety shows that of the Rs 2,264 crore (63% of the corpus of Rs 3,600 crore) allocated to states and UTs, around 89% of the sanctioned funds were not used. No state has reported utilisation of over 50% of the fund, and Uttarakhand & Mizoram top the list with 50% utilisation, followed by Chhattisgarh (43%), Nagaland (39%) and Haryana (32%). Further, out of the 36 states and UTs for which data is available, utilisation in 18 states and UTs is less than 15%. NCT of Delhi has a poor 5% utilisation, as per the analysis that looked at data of all ministries that allocated funds.

Now remember the statement of Yogi Adityanath I told you at the beginning, Even some of our politicians defend the rapist, we have to change this male dominating thought, this castism thought and start to give proper education on sex, puberty and how to respect a women.