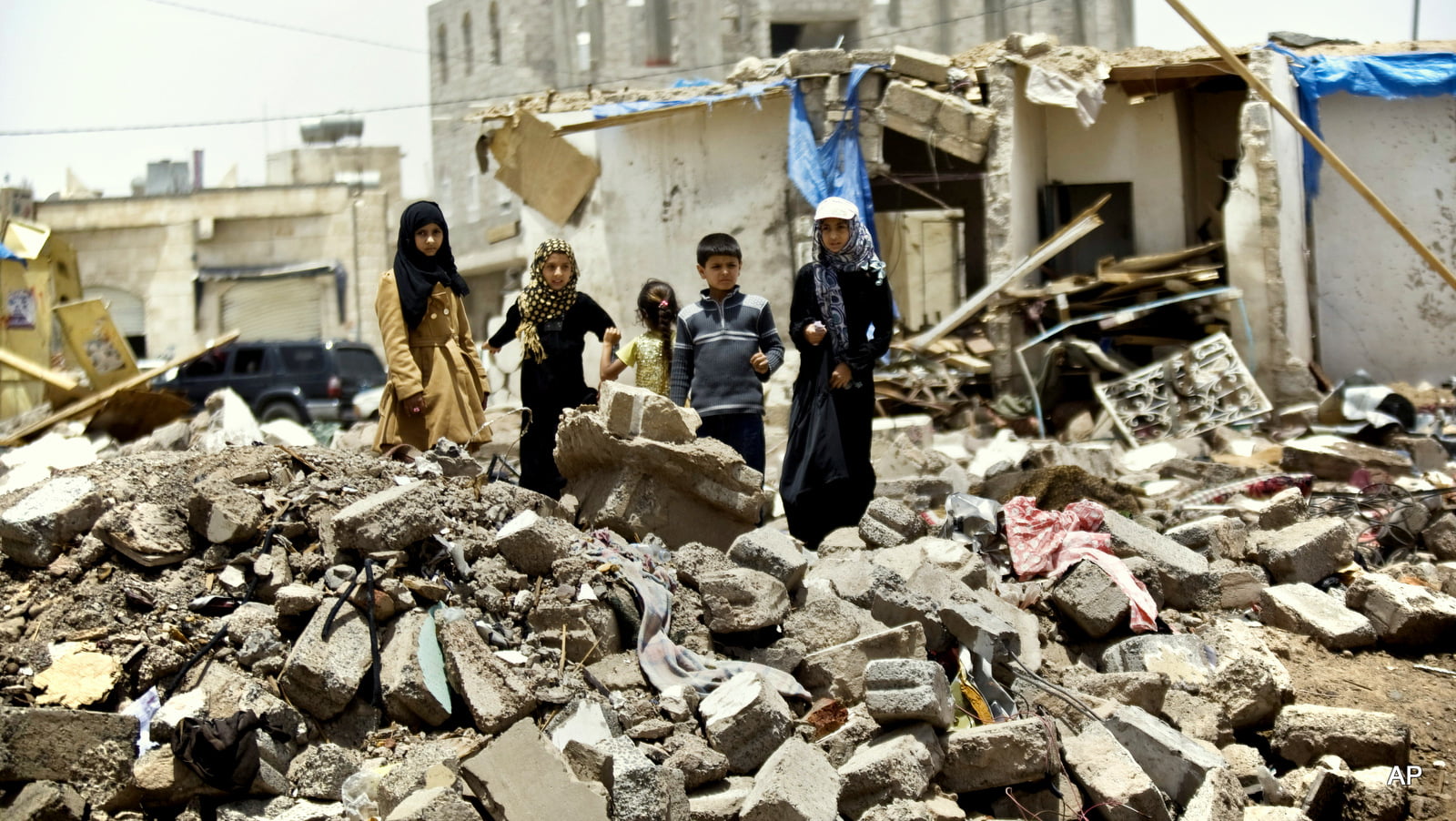 A boy and his sisters watch graffiti artists spray on a wall, commemorating the victims who were killed in Saudi-led coalition airstrikes in Sanaa, Yemen, Monday, May 18, 2015. Saudi-led airstrikes targeting Yemen's Shiite rebels resumed early on Monday in the southern port city of Aden after a five-day truce expired amid talks on the war-torn country's future that were boycotted by the rebels. (AP Photo/Hani Mohammed)
SHARE

AN INSIGHT AND WAY FORWARD.

“ The only thing worse than death is the death of a child.”

The Yemen crisis is the largest humanitarian crisis in the world, with more than 24 million people suffering. Out of this more than 12 million are children who are in need of humanitarian assistance. The number of people suffering from the atrocities comprises almost 85 percent of Yemen’s population. But before plunging into the deep abyss of this crisis, let’s first know what led to the current situation.

All of this started when President Ali Abdullah Saleh, who had led  Yemen for more than three decades, left office in early 2012 as a part of an agreement between the Yemeni government and the opposition groups. This happened due to the Arab Spring’s arrival in Yemen. Saleh’s rule was considered as a kleptocracy. It was a reign of political crisis with street protests against poverty, corruption, and unemployment. But, the worst decision was that Sales decided to amend the Yemeni Constitution and decided to eliminate the presidential term limit so that he could be President forever. But when people protested Saleh decided to step down and transfer his power to the Vice President Abdrabbuh Mansur Hadi, the absence of central government during the transition period worsened the already prevailing clashes between Houthi rebels and al-Isah forces, as well as constant Al-Qaeda insurgency.

Yemen’s political imbalance arose as the severe ecological crisis in the country. The average Yemeni has access to only 140 cubic metres of water per year for all uses, while the Middle Eastern average is 1000 cubic metre per year, and the internationally defined threshold for water stress is 1700 cubic metre per year. Eventually, when Saleh was shot dead, a new civil war erupted and the Saudi Arabian led military intervened in the Yemeni situation.  At least, 56000 people have been killed since January 2016, and the deaths before haven’t been yet counted.

The current situation of Yemen has only worsened in every way. The political conflict, ecological imbalance, depleting water table, etc. led to a famine. No safe drinking water due to the destruction of the water infrastructure has led to the fastest spreading cholera outbreak.

The charity Save the Children estimated that 85,000 children with severe acute malnutrition might have died between April 2015 and October 2018. An estimated 2 million children are acutely malnourished, including almost 360,000 children under five years old who are struggling to survive.

There are so many numbers that are innocent children, suffering these cruel atrocities of the mistakes of the stupid adults. Paying the price in a war about which they aren’t even aware. Most people out there think, why should it matter to them, or how does this affect them. We must understand that this isn’t a war of a particular place or region, this is a war that we have to fight to keep safe the future of humanity.

The UN had verified the death of 7700 civilians by March 2020, with most caused by Saudi led coalition airstrikes. But monitoring groups believe the death toll is far higher. The US-based Armed Conflict Location and Event Data Project (ACLED) said in October 2019 that it had recorded more than 100,000 fatalities, including 12,000 civilians killed indirect attacks. Thousands of more civilians have died from preventable causes, including malnutrition, disease, and poor health.

We must bring our heads and hearts together to alleviate the pain of the innocent people, but the unlawful airstrikes, attacks on civil society, blocking and impeding humanitarian access isn’t the solution. The Houthis have continued to impose severe movement restrictions, including the flow of aid. They have also been stealing UN food aid in some areas controlled by the Houthi authorities. Many experts propose partition as a solution to the Yemeni crisis. Yemen has only existed as a contiguous state from 1990 onwards. Before that Yemen had always been separated into North and South. The north first existed as a separate state under theocratic Zaidi rule, and then under an authoritarian Arab nationalist government in the second half of the twentieth century. The south has been a dubious part. We all know that since unification, Yemen has been unable to foster a pluralistic society, with differences prevailing over unified nationalism.

Partition, then, remains the only option that could guarantee peace and secure the interests of every actor involved in the conflict. Domestically, the Houthis cannot advance beyond the north as they would face vociferous opposition in the south due to sectarian tension. Likewise, as the magnitude of Houthi power in the North has increased, Haji’s government is unlikely to be able to seize control there. By granting Houthis control over Northern Yemen and leaving Southern Yemen to a  coalition of Haji’s government and the STC, not only would the prospect of peace be ensured but the fight against al-Qaeda would also be more effective. Ideologically both Houthi and STC are averse to extremist and dogmatic factions.

In the end, the rest of the world has the power to bring about a revolution to change the prevailing scenario of Yemen, and it is our moral responsibility to see to the situation and try to bring about a change.

And as Scott Mescudi said,

“ Some humans are really bad at being a human.”

I say let’s not be one of them.