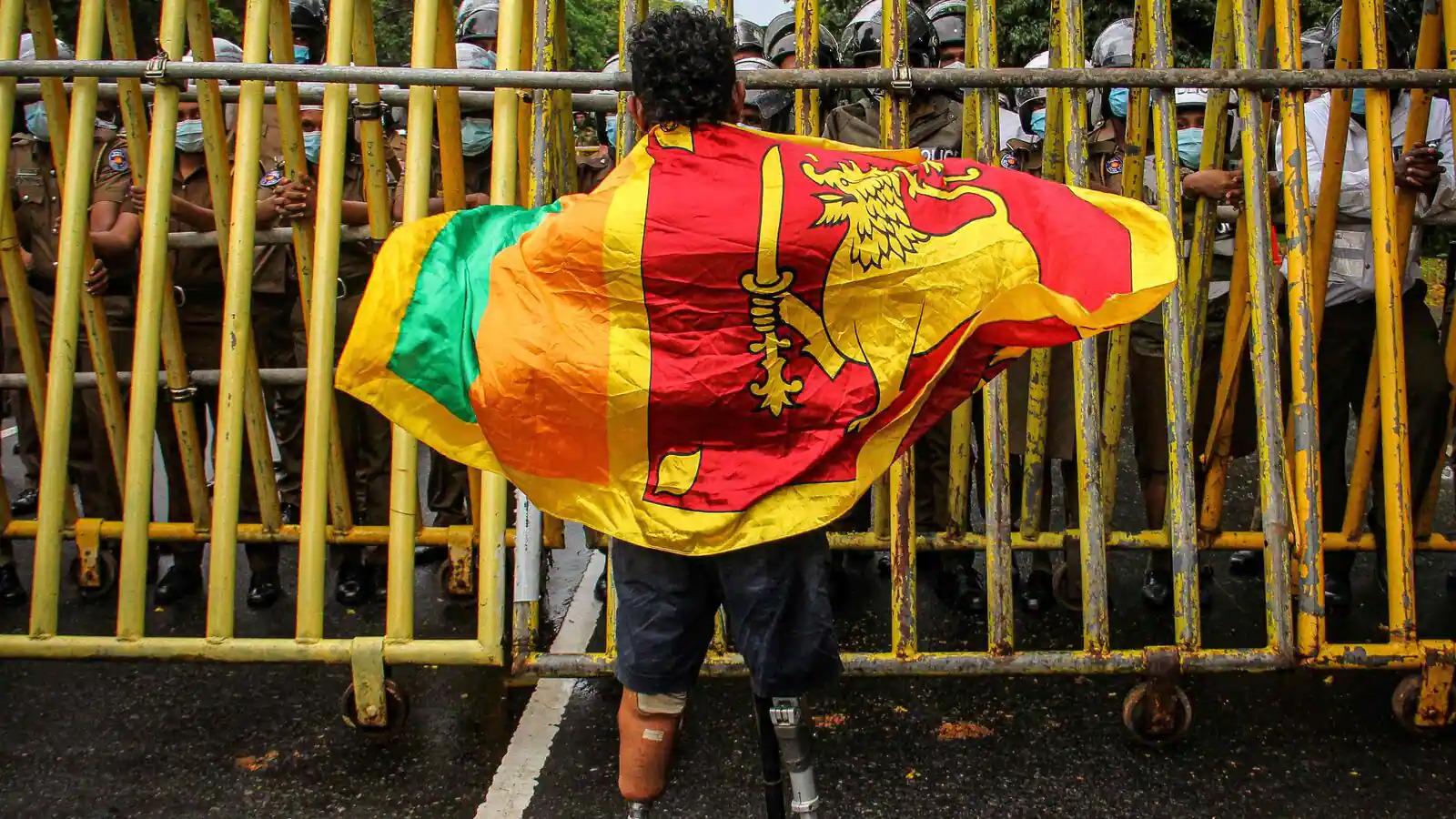 The Sri Lankan economy has been facing one of its worst-ever economic crises, resulting from mismanaged government finances and ill-timed tax cuts, besides the impact of the Covid-19 pandemic.

Huge piles of foreign debt, a series of lockdowns, soaring inflation, shortage in fuel supply, fall in foreign currency reserves, and devaluation of the currency have adversely impacted the country’s economic growth, Sri Lanka’s economy grew at a slower-than-expected 1.8 percent in the fourth quarter of the 2021 financial year, taking its full-year growth to 3.7 percent, data from the government’s statistics department showed.
The Sri Lankan central bank had projected a growth of 5 percent for the year.

Countries like India, China, and Bangladesh have stepped in to help Sri Lanka weather this crisis. It has also sought financial assistance from International Monetary Fund (IMF).

WHAT LED TO THIS CRISIS

Sri Lanka’s economy was in trouble even before the Covid pandemic struck. The lockdowns further added to its woes and impacted the informal sector hard, which accounts for nearly 60 percent of the country’s workforce.
The country’s foreign exchange reserves have fallen 70 percent in the past two years to about $2.31 billion, leaving it struggling to pay for essential imports, including food and fuel.

The financial crisis also stemmed from a critical shortfall in foreign currency, leaving traders unable to finance imports, Tourism, one of the key sources of foreign exchange for the country, was badly hit due to the Covid pandemic. Besides, remittances from Sri Lankans working overseas also declined sharply.

The country is left with foreign reserves of only around $2.31 billion as of February, even as it faces debt payments of about $4 billion through the rest of the year.

“The reason for the shortages is not a shortage of any commodity but the shortage of dollars,” said Dhananath Fernando, chief operating officer of Colombo think-tank Advocate Institute told news agency Reuters.

The $4 billion debt includes a $1 billion international sovereign bond that matures in July.

Job losses have become a common phenomenon in almost every household. Besides, a fall in earnings has led to a rise in poverty rates, According to World Bank data, the share of the poor based on a daily income of $3.20 was estimated to have grown to 11.7 percent in 2020 – or by more than half a million people – from 9.2 percent a year before

The government had identified 5 million families with “fragile financial status of low-income households” and provided them a Rs 5,000 allowance during the Covid-19 lockdowns, But that helped only briefly, with the latest economic crash compounded by the Russia-Ukraine conflict that has led to a steep hike in oil prices serving another gut punch, and making scenes of desperation and panic more and more common.

Shortages have scaled to such heights that examinations for millions of students in the country had to be postponed due to lack of paper and ink.

Shortage in fuel was already leading to long hours of power disruptions across the country. However, on Wednesday, the daily power cuts were further extended to 10 hours, Since the beginning of this month, people were reporting 7-hour outages nationwide.

Non-availability of fuel to generate hydroelectricity has led to a shortage of 750 megawatts of thermal power, More than 40 percent of Sri Lanka’s electricity is generated from hydro, but most of the reservoirs were running dangerously low because there had been no rains, officials told news agency AFP.

Children as they attend online lessons with a help of a kerosene oil lamp during a power cut in Colombo.
Coal and oil are the major components used by the country for electricity production. Both are imported but in a limited supply, as the country does not have enough foreign exchange, The main fuel retailer, the state-owned Ceylon Petroleum Corporation (CPC), said there would be no diesel in the country for at least 2 days.

The CPC told motorists waiting in long queues at petrol stations to leave and return only after imported diesel is unloaded and distributed.

The crisis is so worse that people are having to fight for something as basic as fuel.
Sri Lanka ordered troops to petrol stations last week as sporadic protests erupted among thousands of people who had queued up for fuel.

Fuel shortages have led to long lines at petrol stations and rolling power cuts across much of the country.

A serious shortage of diesel has shut multiple thermal power plants causing rolling power cuts across the nation, Fuel prices have also been increased frequently with petrol up by 92 percent and diesel by 76 percent since the beginning of the year, The government took 12 days to find $44 million to pay for the latest shipment of LP gas and kerosene, officials told AFP.

In March 2020, Colombo had imposed a broad import ban to save foreign currency needed to service its $51 billion in foreign debts. But this has led to widespread shortages of essential goods and sharp price rises.

Many people in the country are opting for cheaper food items, in order to curtail expenses. They are also reducing entertainment bills to zero.
Even a cup of tea now costs Rs 100, up from Rs 25 as of October last year, according to a report by the country’s local media website, Doctor’s visit, medicines have also become increasingly expensive with most people resorting to self-medication, a practice the World Health Organization (WHO) says can lead to higher morbidity.

Many hospitals have stopped routine surgeries, and supermarkets have been forced to ration staple foods, including rice, sugar, and milk powder, Earlier this month, the central bank of the country raised interest rates to staunch growing inflationary pressures and urged the government to consider measures including curbing non-essential imports and raising fuel prices to reduce pressure on the ailing economy.
Retail inflation in February reached 15.1 percent while food inflation hit 25.7 percent – the highest in a decade. The Central Bank of Sri Lanka (CBSL) targets to hold inflation in a 4-6 percent range over the medium term.

‘NOTHING TO EAT, DRINK’

The sudden rise in prices of key commodities has left many people at the mercy of subsidies as all essential items are in short supply due to import restrictions forced by the forex crisis.

Anger seems to be mounting among people as they fight for items of daily needs and are fretting over how to feed their families amid soaring food prices, A housewife in Colombo told AFP that people wait in long queues every day, even before dawn, just to receive their share of kerosene that can be used to fire their cooking stoves. She also said that few people have fainted and she herself feels sick having eaten nothing.

Another woman, a domestic worker recalls being in the country for 60 years and never witnessing a situation like this. She also complained of not having anything to eat or drink, as told to AFP.

Sri Lanka’s central bank has devalued the rupee by up to 15 percent. the Central Bank of Sri Lanka, with immediate effect, set an exchange rate limit of 230 rupees per dollar compared to a limit of 200-203 that had prevailed since October.
In December, CBSL announced a host of measures including giving an additional 10 rupees per dollar as an incentive but this had limited impact with remittances dropping 61.6% in January to $259 million from $675 million a year earlier.

HOW INDIA IS HELPING

In January, the Reserve Bank of India (RBI) had announced a $400 million swap to help Sri Lanka shore up reserves, as part of an aid package the neighbors negotiated.

It then signed an agreement for a $500 million credit line to purchase fuel from India in February.
The agreement proved critical as global oil prices soared after Russia invaded Ukraine, and Sri Lanka’s fuel import costs jumped as much as 40% in a week. Shipments from Indian Oil Corporation (IOC) began arriving around mid-March.
In the same month, Sri Lanka and India signed a $1 billion credit line for importing essentials, including food and medicine, The country has now sought an additional credit line of at least $1 billion from India to help bring in essentials as shortages persist and protests break out.