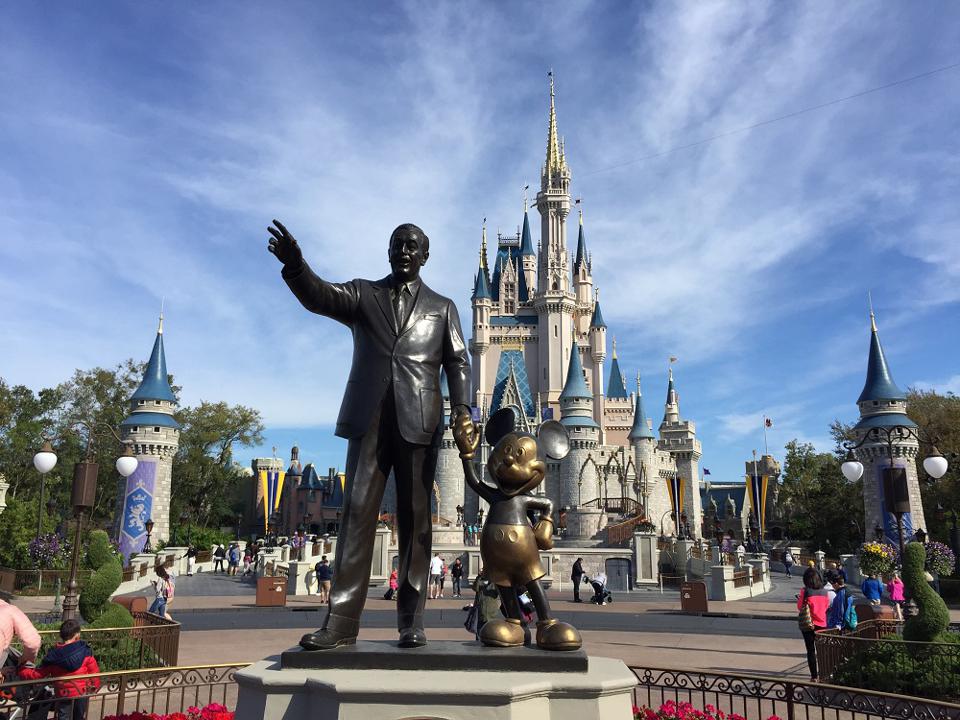 The Walt Disney Company, founded on 16 October 1923-86, later becomes Walt Disney Productions, an American corporation that was the best-known purveyor of family entertainment in the 20th and 21st centuries. It also was one of the world’s largest media conglomerates, with such notable holdings as ABC, ESPN, Pixar, Marvel Entertainment, and 20th Century Fox.

Walt Disney began his career in animation with the Kansas City Film Ad Company in Missouri in 1920. In 1922 Disney and his friend Ub Iwerks, a gifted animator founded the Laugh-O-gram Films studio in Kansas City and began producing a series of cartoons based on fables and fairy tales.

In 1923 Disney produced the short subject, Alice, in Cartoonland, a film combining both live-action and animation that was intended to be the pilot film in a series. Within weeks of its completion, Disney filed for bankruptcy and left Kansas City to establish himself in Hollywood as a cinematographer. Alice in Cartoonland turned out to be a surprise hit, and orders from distributors for more Alice films compelled Disney to reopen shop in Hollywood with the help of his brother Roy, a lifelong business partner. The Kansas City team soon joined the Disneys in California, and the company produced mostly Alice films for the next four years.

In 1927 Disney began his first series of fully animated films, featuring the character Oswald the Lucky Rabbit. When his distributor appropriated the rights to the character, Disney altered Oswald’s appearance and created a new character that he named Mortimer Mouse; at the urging of his wife, Disney rechristened him Mickey Mouse. Two silent Mickey Mouse cartoons—Plane Crazy (1928) and Gallopin’ Gaucho (1928)—were produced before Disney employed the novelty of sound for the third Mickey production, Steamboat Willie (1928), which was the first Mickey cartoon released. The film was an immediate sensation and led to the studio’s dominance in the animated market for many years.

BEGINNING OF THE SUCCESS

The company renamed Walt Disney Productions in 1929, produced cartoons featuring Mickey Mouse and his regular supporting players Donald Duck, Pluto, and Goofy, as well as the Silly Symphonies series. Semiabstract cartoons featuring animation set to classical music or to the music of Carl Stalling, the brilliant musician who scored many of the best Disney and Warner Brothers cartoons.

The Silly Symphonies entry Flowers and Trees (1932) was the first cartoon produced in the three-colour Technicolor process, as well as the first animated short subject to be honoured with an Academy Award. The most popular of the Silly Symphonies cartoons was The Three Little Pigs (1933), which earned another Oscar.

The continuing success of the studio emboldened Disney to make his riskiest move in 1934 when he began production on Snow White and the Seven Dwarfs (1937).  Although not the first feature-length animated cartoon—that honor probably goes to Lotte Reiniger’s The Adventures of Prince Achmed (1926)—it was the first to receive widespread release and publicity. As much of a sensation as Steamboat Willie had been, Snow White revolutionized the industry and proved animation’s effectiveness as a vehicle for feature-length stories.

Scenes in Disney cartoons were composed and framed as they would be for a live-action film, and surreal aspects of the characters were kept to a minimum. Although this approach provoked the criticism that Disney discouraged experimentation and limited animation possibilities, there is little question of its success in Snow White and the animated features. Pinocchio (1940), detailed full-figure animation, is perhaps Disney’s grandest achievement. Fantasia (1940) is a series of abstract vignettes set to classical compositions and praised for its stunning visual virtuosity. Dumbo (1941) and Bambi (1942) also achieved recognition as masterpieces by effectively employing the devices Disney had first brought together in music, comedy, pathos, adventure, and genuine horror in Pinocchio.

Disney suffered a major setback in 1941 when the studio’s animators went on strike for three months. Disney took the action personally, and many of the studio’s top animators were compelled to resign. The enthusiastic mood within the studio had been permanently dampened, and the studio produced little on the level of Pinocchio or Dumbo for the next decade, concentrating instead on short cartoons. Nature documentaries, and features that combined live-action and animation such as The Three Caballeros (1945) and Song of the South (1946). The feature-length cartoons Cinderella (1950), Alice in Wonderland (1951), and Peter Pan (1953) were considered fine efforts, but many felt they lacked the panache and dimension of the early ’40s features.

Television productions, and his new theme park, Disneyland, opened in 1955 in Anaheim, California. It was also about then that Disney established the distribution company Buena Vista Productions in order to ensure complete control over his films and their marketing. It produced hit television shows such as The Mickey Mouse Club, Zorro, and Walt Disney Presents, which, under various titles (such as Walt Disney’s Wonderful World of Color and The Wonderful World of Disney) and despite periodic hiatuses, was still in production at the beginning of the 21st century. Quality animated features such as Sleeping Beauty (1959), 101 Dalmatians (1961), and Winnie the Pooh and the Honey Tree (1965) were still produced, and well-received live-action vehicles included 20,000 Leagues Under the Sea (1954), Old Yeller (1957), Darby O’Gill and the Little People (1959), The Absent-Minded Professor (1961), and The Incredible Journey (1963). Disney’s finest live-action film, Mary Poppins (1964), was heralded as the studio’s greatest achievement in more than 20 years.

The 1990s were a hugely successful decade for the Disney Company. The revival was heralded by the release of The Little Mermaid (1989), More animated blockbusters followed, including Beauty and the Beast (1991), Aladdin (1992), The Lion King (1994), The Hunchback of Notre Dame (1996), and Fantasia 2000 (1999), The company had experimented with computerized animation for the live-action feature Tron (1982) and realized the technology’s potential with the enormously successful Toy Story (1995) and Toy Story 2 (1999), films that Disney jointly developed and produced with Pixar Animation Studios

Walt Disney was never a rich man by Hollywood standards, largely because he valued perfection more than profits. “I don’t make movies to make money,” he once said, “I make money so I can make more movies.” The company was in financial disarray when he died on December 15, 1966, but enterprises he had planned before his death assured the company’s future. In 1965 he purchased 43 acres of barren land in central Florida for his most ambitious project, the Walt Disney World Resort. Roy Disney assumed supervision of the project, and the park opened in 1971 to great success.

In the early 21st century more than 115 million people visited Disney attractions annually worldwide. The Disney Magic, the first ship in the Disney Cruise Line, was launched on July 30, 1998, and offered vacation packages to the Caribbean islands. In addition to the long-running Disney Channel cable network, broadcasting interests were expanded to include the ABC network, the ESPN sports cable network, and Radio Disney. The company’s most visible and noteworthy enterprise of the 1990s was its foray into Broadway musicals. Stage adaptations of the animated features Beauty and the Beast and The Lion King, both visually resplendent and long-running successes.

Walt Disney Company was one of the world’s largest entertainment conglomerates, and it consistently ranked among America’s top 50 corporations. In the 21st century, Disney’s partnership with Pixar continued to bear fruit, and their innovative films challenged previously held notions of what could be done with computer animation. A number of their films, including Finding Nemo (2003), Ratatouille (2007), WALL∙E (2008), Up (2009), Toy Story 3 (2010), Inside Out (2015), and Coco (2017), won Academy Awards for best-animated film. In 2006 Disney purchased Pixar for $7.4 billion, and it acquired Marvel Entertainment, a company best known as a comic book publisher, for $4 billion in 2009. Marvel, which had just begun to accelerate its film-development schedule at the time of the purchase, produced a string of hits that culminated in The Avengers (2012), one of the top-grossing films of all time. In 2012 Disney acquired Lucasfilm Ltd. from filmmaker George Lucas for approximately $4 billion. The purchase brought the Star Wars franchise under the Disney umbrella, and in 2015 the company released the seventh installment in the series, Star Wars: The Force Awakens, which was directed by J.J. Abrams. In 2017 Disney agreed to purchase most of the holdings of 21st Century Fox, including the film studio 20th Century Fox. The deal closed in 2019 and was valued at about $71 billion.