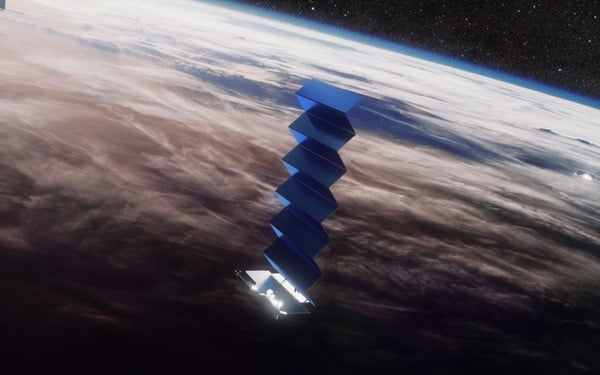 Over the past year, SpaceX has been launching hundreds of small broadband internet-beaming satellites into low-Earth orbit as part of its Starlink constellation. The tally as of August 2020: 597. Ever since SpaceX launched its first batch of internet-beaming satellites last year, astronomers have watched with dreads as the company continued to blast more spacecraft into orbit.

While the promise of reliable and fast satellite internet accessible from pretty much anywhere in the world sounds pretty promising, not everybody is happy. As it turns out, the tiny satellites are way brighter than anybody was expecting and that’s bad news for astronomers. Over the last couple of months, countless reports have emerged of frustrated astronomers having their observations ruined by Starlink satellites appearing as bright streaks of light. From the darkest skies you can find on Earth, approximately 9,000 stars are visible to human eyes: down to a visual magnitude of +6.5, the limit of human vision.

Up until now, people have been somewhat in the dark about the true impact of SpaceX’s internet-from-space project called Starlink, which envisions nearly 12,000 of these satellites orbiting Earth. SpaceX’s satellites are super bright compared to others, and astronomers have been worried that with so many luminous satellites in the sky, the odds of one passing in front of a telescope and obscuring an image will increase.

It turns out, some astronomers have reason to be concerned. Certain types of astronomy may be more negatively affected than others, one peer-reviewed study shows, particularly those kinds that scour large swaths of the sky over long periods of time looking for faint, faraway objects. That means scientists looking for distant objects beyond Neptune — including the hunt for the mysterious Planet Nine — might have trouble when Starlink is complete.

They’re so bright, in fact, that some are visible to the naked eye. In fact, onlookers keep mistaking them for UFOs, according to news reports from December.The brightness is due in part to the fact that the Starlink satellites are orbiting Earth at much closer distance than most — an operational altitude of roughly 550 kilometers, rather than the usual medium-Earth orbit (at 20,000 km) or geostationary orbit (at 36,000 km) used by other kinds of satellites.

The sky is a big canvas, and one tiny satellite isn’t going to be a major headache. A host of factors dictate exactly how and when satellites will be a problem. A satellite’s size, shape, height, and path around Earth all affect exactly how much light it reflects from the Sun and where people will see it the most. Meanwhile, the time of year and the time of night determine how much sunlight is shining on a satellite at any given moment.In the more northern and southern latitudes, Starlink satellites will dominate the horizon during the first and last few hours of the night. In the summertime, it’ll be much worse, with hundreds of satellites visible for those in rural areas away from city light pollution.

Luckily, SpaceX claims it’s working on a number of solutions.Early attempts to paint the underside of each satellite with an anti-reflective coat of paint seem to have only been partially successful.

SpaceX is now trying out a new method: launching satellites with a cool pair of sunglasses.  The space company is planning to mount retractable sunshades, called “VisorSat,” to each of the satellites to block sunlight from hitting its reflective parts.

If no solution is found, astronomers could be struggling with bright Starlink satellites ruining their observations for many years to come. SpaceX already has permission from the Federal Communications Commission to launch tens of thousands of Starlink satellites to bring global internet coverage to the world.