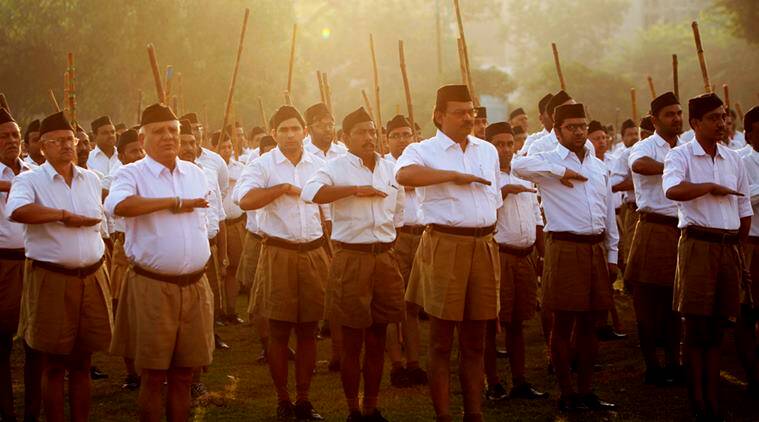 Haryana government has scrapped a 54-year-old rule that restricted state government employees from joining or being associated with the Rashtriya Swayamsevak Sangh (RSS) and the Jamaat-e-Islami. The government employees were first barred under Service (Conduct) Rules from joining these organizations on November 30, 1966, when Indira Gandhi was the prime minister, with the government believing they were not merely cultural or social organizations. The ban was briefly lifted in 1975 but reimposed in 1980

An MHA order issued on November 30, 1966, read: “The attention of the Ministry of Finance, etc., is invited to the provisions of sub-rule (1) of Rule 5 of the Central Civil Services (Conduct) Rules, 1964 under which no government servant shall be a member of, or be otherwise associated with, any political party or any organization which takes part in politics nor shall he take part in, subscribe in aid of, or assist in any other manner, any political movement or activity. Ascertain doubts have been raised about the government’s policy with respect to the membership of any participation in the activities of the Rashtriya Swayamsevak Sangh and the Jamaat-e-Islami by government servants, it is clarified that the government has always held the activities of these two organizations to be of such a nature that participation in them by Government servants would attract the provisions of sub-rule (1) of Rule 5 of the Central Civil Services (Conduct) Rule, 1964. Any government servant, who is a member of or is otherwise associated with the aforesaid organizations or with their activities is liable to disciplinary action.

Then, on July 25, 1970, the MHA reiterated its 1996 order and once again reiterated the same on October 28, 1980. The 1980 order also added: “In the context of the current situation in the country the need to ensure a secular outlook on the part of government servants is all the more important. The need to eradicate communal feelings and communal bias cannot be over-emphasized. No notice should be taken by the government and its officers, local bodies, state-aided institutions of petitions or representations on a communal basis, and no patronage whatsoever should be extended to any communal organization. The Ministry of Finance etc., are, therefore, requested to especially bring once again to the notice of all government employees, working in or under them, the above-quoted provisions in para 1 (regarding ban on joining RSS or Jamaat-e-Islami) on the subject. It is emphasized that any disregard of these instructions should be considered as a serious act of indiscipline and suitable action initiated against the erring employees”.

Haryana Chief Secretary Vijai Vardhan, Monday, October 11, 2021, issued a letter with the subject, “Implementation of Haryana Civil Services (Government Employees’ Conduct) Rules, 2016”, regarding “taking part in politics and elections” and “joining of associations” to all the administrative secretaries; heads of departments, managing directors/ chief administrators of the boards/ corporations; all the divisional commissioners; deputy commissioners, registrars of universities and The Registrar (General), Punjab and Haryana High Court, In the letter, the Chief Secretary mentioned that “the earlier issued letters by his predecessors in 1967, 1970 and 1980 are hereby withdrawn with immediate effect as they are no longer relevant”. The letter further said that “no government employee shall join or continue to be a member of an association, the objects or activities of which are prejudicial to the interest of the sovereignty and integrity of India or public order or morality”.

Telling the rationale reason behind the order, a senior Haryana government officer told The Indian Express: “It was in 1975 that MHA had lifted the ban from all government servants across the country in all the states from joining these organizations including RSS/Jamaat-e-Islami and Anand Marg. Various states had lifted the ban earlier. However, apparently, it was not read by anybody in Haryana and now it has been implemented there as well. Also, the new Conduct Rules had come in 2016 that superseded all executive instructions issued earlier. As such RSS or Jamaat-e-Islami are not political organizations listed with the Election Commission of India. RSS is rather a cultural organization. Thus, the Haryana government has now just reiterated the MHA’s instructions. No government employee is barred from being associated with these organizations”.

The Haryana government’s move has triggered a sharp reaction from the Congress, which asked if the ML Khattar government was running a “BJP-RSS school”.

AICC general secretary Randeep Surjewala said, “Haryana government is referring to Haryana Civil Services (Government Employees’ Conduct) Rules, 2016 while withdrawing the earlier notifications regarding ban on government employees from joining or being associated with RSS or Jamaat-e-Islami. However, Clause 8 of the aforesaid rules prohibits any government employee from having an association with any political party or assisting in any political movement.

“Moreover, he has to make an endeavor to stop his family members from indulging in any subversive activities. While the government employee can exercise his right to vote, he cannot campaign for any candidate or use his influence in connection with any election. On the other hand, Clause 9 specifies that he cannot join any association whose activities are prejudicial to the sovereignty and integrity of India or public order. Is (Manohar Lal Khattar) running the government or a BJP-RSS school?”