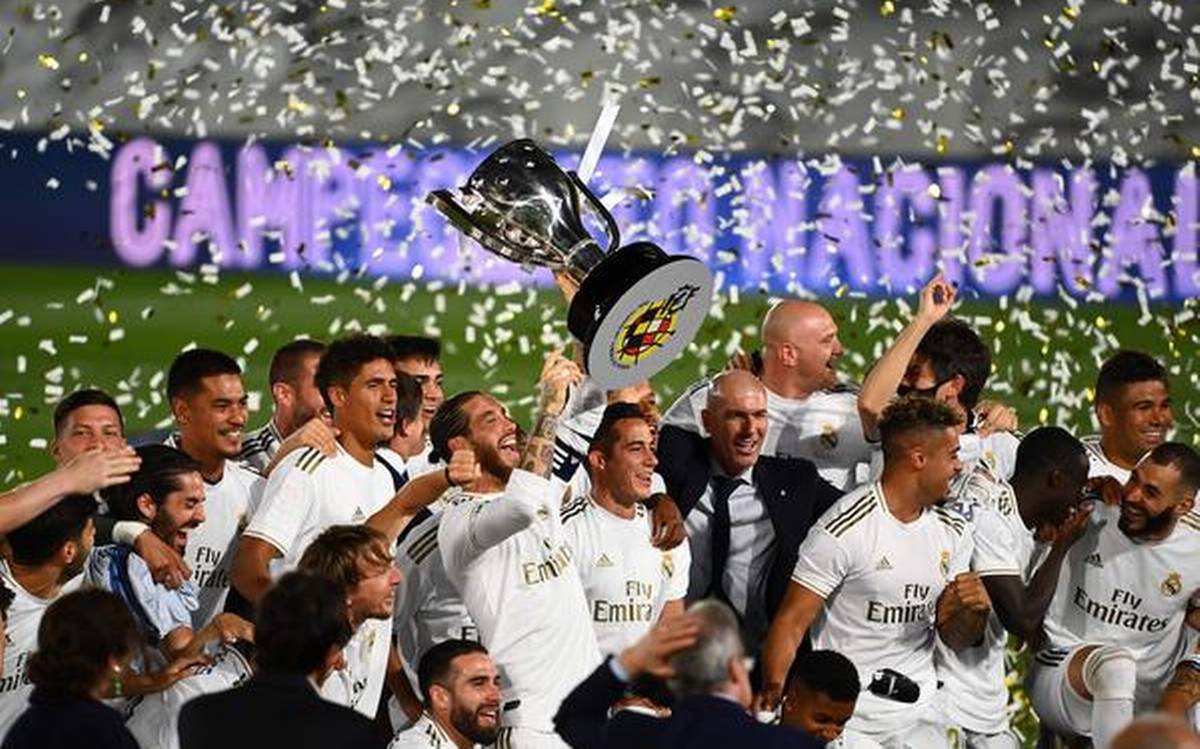 Real Madrid has been crowned the champions of Spain for the 34th time and has captured the La Liga title for the 3rd time in the decade. The Los Blancos had an excellent winning run since the return of La Liga after the corona Virus outbreak, the team was at second spot behind Barcelona when the league restarted. The consistency and determination seen in Real Madrid was exactly what lacked in the previous year’s Champions Barcelona. Real Madrid’s Captain Sergio Ramos leads the team to the glory with pure leadership and has been one of the most consistent goal scorer this season with 12 goals in all competitions that too being a Centre Back says a lot about the leading the team from the front. The Los Blancos goalkeeper Thibaut Courtois has kept 18 clean sheets in the 34 league appearances and conceded only 20 goals, the best performance in La Liga even surpassing Jan Oblak in terms of clean sheets.

Unlike the Champions League, La Liga is a long and tiring league with 38 weekly matches and eventually the League topper being awarded the La Liga trophy. The consistency of the clubs are tested in these leagues as a team has to deal with injuries, rotations and different strategies for different teams, you are at times content with a draw against a strong team and the same draw against the bottom table team is no less than a loss. The best clubs are always under the constant scanners of the pundits and journalists, and as per them, the VAR has been deemed as the game saver for the Madridistas. Despite that said the matter of fact for the penalty decisions given in the favour of real Madrid was the attacking strategy adopted by Madrid, if you attack deep you are vulnerable to be fouled and its an opportunity to convert such attacks into spot-kicks. Karim Benzema has been in an excellent form this season scoring 21 goals for his side, being the top scorer for Real Madrid and second in La Liga after Messi who is at the top with 23 goals.

The Real Madrid squad’s average age is 26.9 years that shows the balance between the experienced and new talents in the squad. A balanced squad is always a sign of successful teams with the perfect mix of experienced players nurturing the young talent. Real Madrid in recent years has invested in young talents like Vinicius Jr., Rodrygo, Diaz all aged 20 which shows the trust and confidence it has in its young talents. The trademark Counter attacking strategy requires some fast legs on the grounds and a young squad like that of Madrid helps them exploit other teams.

Zinedine Zidane’s return to La Liga has been significant and can be seen by the performances put on display by his team. After his departure from the club in 2017 Real was knocked out early in Champions League and was way behind Barcelona in La Liga, with his return to manage the Madrid side he was again the key to the lost treasure. Since his return, he has managed Madrid in 60 matches winning 38 and drawing 12 matches, which means since his return Madrid has retained 126 points out of the possible 180. This year’s League was a real nail-biting one with Real Madrid being the eventual winners and ending the decade with a La Liga Title and still a lot to do in the Champions League where they face Manchester City in Etihad Stadium with a one-goal deficit.