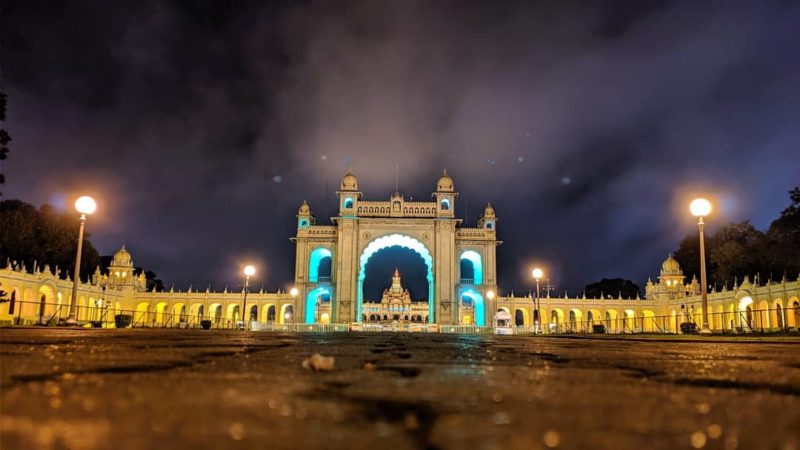 ‘One’s destination is never a place, but a new way of seeing things.’

Mysore, also known as Mysuru, is Karnataka’s second-biggest city in southern India. Situated right at the foot of Chamundi Hills, it was once the capital of the Kingdom of Mysore. The rich cultural environment of Mysore has earned it the moniker of the cultural capital of Karnataka. The kings of the Wodeyar dynasty set the bar high for the southern cultural capital of Mysore. Ornate palaces and the Gothic St. Philomena’s Church with its 175-foot spires pack a visual punch; local institutions keep Carnatic classical music and dance in the public eye. A prominent 11th-century temple sits atop 1,000 steps on the city’s outskirts.

The site was mentioned in the epic Mahabharata as Mahishmati. Mysore was known as Purigere in the Mauryan era and later became Mahishapura. It was the administrative capital of the princely state of Mysore from 1799-1831 and long was the second most populous city of Karnataka state, until being surpassed by Hubballi-Dharwad in the second half of the 20th century. Its urban agglomeration, however, is still the state’s second-largest.

Famously known as The City of Palaces, it wouldn’t be wrong to say that it, currently Mysuru, is one of the most important places in the country regarding ancient reigns. It is replete with the history of its dazzling royal heritage, intricate architecture, its famed silk sarees, yoga, and sandalwood, to name just a few. Located in the foothills of the Chamundi Hills, Mysore is the third most populated city in Karnataka, and its rich heritage draws millions of tourists all year round. The highlight is the majestic Mysore Palace, a UNESCO World Heritage Site, which is a must-visit.

Mysore was one of the three largest Princely States in the erstwhile British Empire of India. To this day, the Mysore Palace stands tall as one of the most spectacular palaces in India. A very famous tourist spot that sees thousands of visitors milling in and around it every day, the Mysore Palace is a mesmerizing example of Indo-Saracenic architecture, every inch of the palace drips with opulence and intricate details, and every room that you visit stands out in terms of its elaborate architecture, beautiful paintings, rich colors, and stained-glass windows. On every Sunday, and during the Dussehra celebrations, the palace is spectacularly lit up once dusk falls.