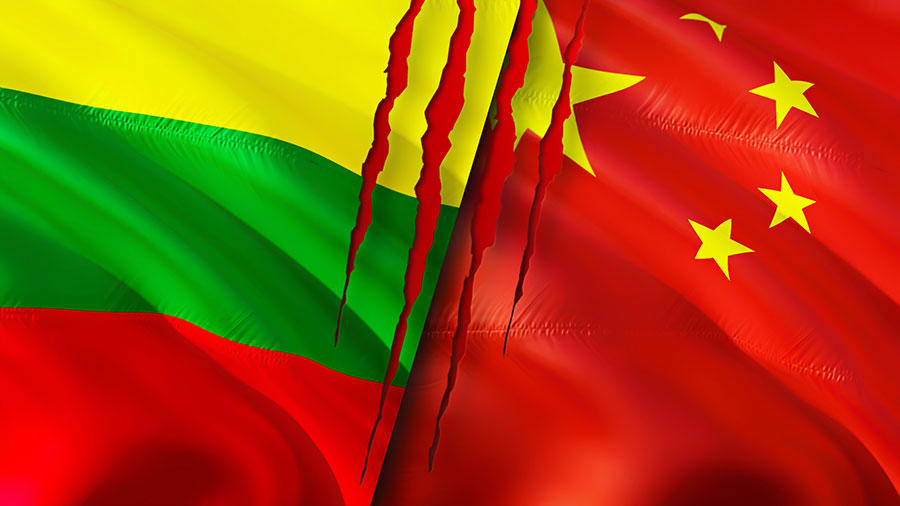 Recently a very interesting diplomatic dispute has played out on the world stage. The People’s Republic of China (PRC), the second-largest economy and the most populous country in the world, engaged in a diplomatic and trade disagreement with the small European country of Lithuania. China has recalled its ambassador from Vilnius, an occurrence that happened for the first time for a European Union member, and asked the Lithuanian ambassador to leave Beijing. This is a standard move enacted by all the countries when diplomatic relations are in crisis.

Contents
What has Lithuania done to provoke China?How did China react to Lithuania’s actions?What is the impact of China’s countermeasures on Lithuania?What is the geopolitical fallout of the China-Lithuania spat?

The story so far In November 2021, a Taiwanese Representative Office was opened in Lithuania, notable because it is for the first time that Taiwan was allowed to use its own name to open an office within the EU. Following this, China has downgraded its diplomatic relations with Lithuania, calling it a violation of the “One China Policy”. China has also unofficially boycotted products from Lithuania, whether it is sourced directly or indirectly from the country. Lithuania has so far not backtracked on its actions against China. Taiwan, the U.S., and the EU have expressed their support to them in what has been termed as a “David vs Goliath” battle.

What has Lithuania done to provoke China?

Lithuania’s current wave of assertive moves against China to a certain extent has been attributed to the change of government in 2020, as well as the growing geopolitical tensions in Eastern Europe over EU and NATO’s fallout with Lithuania’s adversarial neighbors, Russia and Belarus. Lithuania, being the first constituent of the Soviet Union to break out as an independent state, has its own historical context and ideological rationale for standing up to China. The new Government of Lithuania espouses a “values-based” foreign policy based on democracy and freedom and had explicitly offered support to the cause of Taiwan in 2020 itself. Lithuania has been one of the biggest critics of China within the EU on the Xinjiang and Hong Kong issues. Lithuania supported Taiwan’s pitch to become an observer at the World Health Organization in 2020 against China’s opposition in the wake of the COVID-19 pandemic.

The growing Sino-Russian partnership against the West has also made Lithuania wary of China. Citing security reasons, Lithuania has advised its population to avoid buying smartphones made in China and has kept China away from acquiring controlling stakes in its Klaipėda seaport, as well as from its 5G infrastructure bids. Moreover, Lithuania’s rationale that economic relations can be sustainable only with democratic regimes, has heightened tensions between Lithuania and China. In May 2021, Lithuania quit the 16+1 dialogue format, which was initiated by China in 2012 as a multilateral forum for engagement with the countries of Central and Eastern Europe. Lithuania is the first country in that group to have done so and stated the economic non-reciprocity of China and threats to European unity as reasons for its exit.

How did China react to Lithuania’s actions?

By the end of November 2021, China downgraded its relationship with Lithuania by permanently recalling its ambassador from the country and by downgrading diplomatic relations from the ambassadorial level to that of chargé d’affaires. When Lithuania withdrew its diplomatic staff from China expressing safety concerns, China called them fabricated. China is also putting pressure on companies to stop sourcing products from Lithuania for China-bound exports, threatening that they will lose access to Chinese markets if they do so. China has used this strategy previously in scuffles with countries like Norway, Japan, and Australia when they were perceived as acting against China’s “core interests”.

China’s coercion against Lithuania is seen as directed not just against the country, but also against any other country which could potentially stand in China’s way. China alleges that Lithuania is acting in concert with the American efforts of containment by using the Taiwan card and to spread discord between China and Europe. In addition, the state-run Chinese media have held the ruling government in Lithuania responsible for the fracas, with their pro-Western and anti-Communist ideology purportedly targeting China for political gains.

What is the impact of China’s countermeasures on Lithuania?

China amounts to only one percent of Lithuania’s exports and its imports from China are five times more. This made it easy for the country to take a tough stand against China. However, this put an unexpected strain on its trade with partners in the rest of Europe, which are highly dependent on China. The EU is currently China’s largest trading partner, and about 80-90 percent of Lithuania’s exports are based on manufacturing contracts with the rest of the EU. The customs authorities in China have apparently stopped processing such direct and indirect goods sourced from Lithuania.

Through this indirect attack, China is seen as trying to weaken European support to Lithuania and cancel the country out of global supply chains. China’s Foreign Ministry’s statement that “those who insist on acting in collusion with Taiwan secessionist forces will eventually be swept into the garbage bin of history.” can be understood in this context, The projected possibility is that China is putting pressure to coerce Lithuania into de-escalation and rename the Taiwanese Representative office, though its effectiveness is to be seen. The issue has widened the political differences between Lithuania’s current President who seems to be more conciliatory to China and the coalition government which is largely hawkish on China.

What is the geopolitical fallout of the China-Lithuania spat?

Taiwan, the U.S., and the EU have been calibrating their response to the China-Lithuania row. Taiwan has made efforts to compensate the Lithuanian economy for China’s coercion. About 20,000 bottles of Lithuanian rum that had been bound for China were bought by the Taiwan Tobacco and Liquor Corp (TTL), offering a symbolic gesture of support. Taiwan has come up with a $200 million investment plan to help cover Lithuania’s economic losses. This move is also supposedly designed to make Lithuania a gateway to Taiwan for accessing the EU market, especially given the current semiconductor supply shortages. Taiwan is also planning to introduce a $1 billion credit program aimed at benefiting Lithuanian businesses.

The European Commission has also warned of raising the Lithuania issue at the World Trade Organization by filing a complaint against China. The U.S. has expressed concerns about China’s attempts to coerce Lithuania over Taiwan, along with EU countries like Germany who have expressed solidarity with Lithuania. These developments have arisen in the backdrop of the countdown to the Beijing Winter Olympics. The EU member states are yet to decide on joining a diplomat boycott of the event, initiated by the U.S. citing human rights concerns. Thus, the China-Lithuania issue appears to perfectly dovetail with the intensifying great power rivalry.