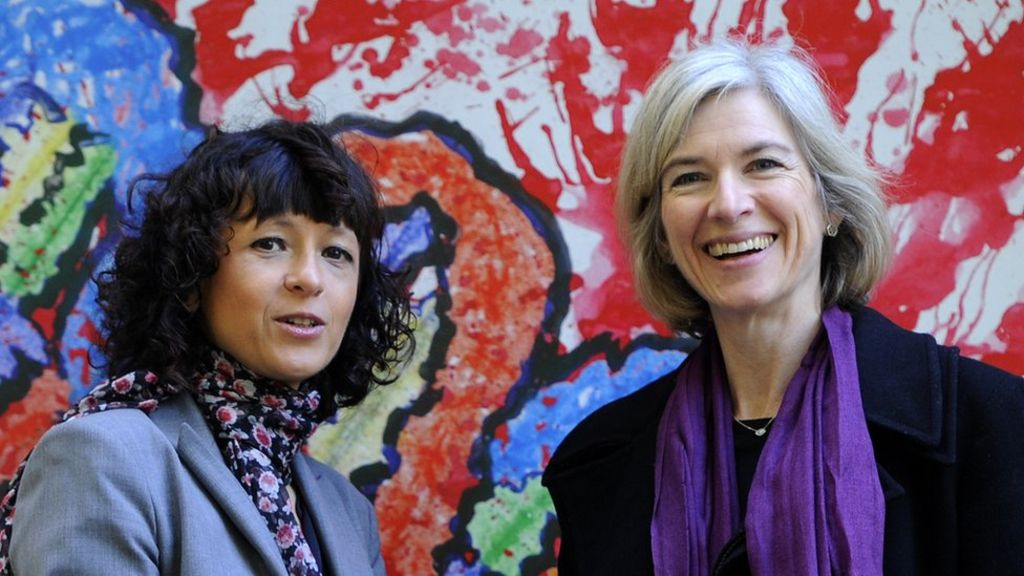 In a decision that reflects the views of many (but far from all) experts on genome editing, the Royal Swedish Academy of Sciences on Wednesday awarded the Nobel Prize in chemistry to American biochemist Jennifer Doudna of the University of California, Berkeley, and French microbiologist Emmanuelle Charpentier of the Max Planck Institute for Infection Biology, for their 2012 discovery that a bacterial immune system called CRISPR can be repurposed to edit DNA, the molecule of heredity.

The award smashed records and made scientific history as the only science Nobel ever won by two women.

In an interview with reporters after the award was announced, Charpentier said that while she considers herself a scientist first, she is happy and a bit shocked that two women won the Nobel. “I think it’s very important for women to see a clear path. I think the fact that Jennifer Doudna and I were awarded this prize today can provide a very strong message for young girls,” she said.

Doudna said: “I’m proud of my gender. I think it’s great, especially for younger women, to see this and to see that women’s work can be recognized as much as men’s.”

The prize also honoured a scientific breakthrough that, compared to most recent Nobel-winning work, happened only yesterday: Charpentier published her first important CRISPR paper only in 2011 and met and joined forces with Doudna in March of that year (they met at a scientific conference in Puerto Rico and went for an intense walk on the beach), publishing their seminal paper in 2012. Their study showed that a bacterial enzyme called Cas9 could cut purified DNA floating (outside of cells) in test tubes. Crucially, Cas9 could be paired with custom-designed molecules called CRISPR-related RNAs that would lead the enzyme to any site on a DNA molecule like a bloodhound leading detectives to a fugitive.

The discovery is so new that a bitter fight is still being waged over who deserves the key U.S. patents for CRISPR — with Charpentier and Doudna battling against Feng Zhang of the Broad Institute in Cambridge, Mass., who was conspicuously ignored by the Nobel committee.

“Genome editing with CRISPR-Cas9 is certainly on the list expected to be recognized and Emmanuelle Charpentier and Jennifer Doudna did make the initial discoveries,” biochemistry Jeremy Berg, professor of computational and systems biology at the University at Pittsburgh and former director of the NIH’s National Institute of General Medical Sciences, told STAT. “I remember seeing Professor Doudna give a lecture at a meeting shortly after the CRISPR genome editing had been discovered and walking out thinking, ‘this is a big deal and will be revolutionary.’ Of course, this prize will lead to controversy, given the patent dispute about CRISPR, but it is clear to me that the crucial discoveries were made by Charpentier and Doudna and their co-workers.”

The work unleashed a genome-editing frenzy. Scientists around the world dropped what they had been working on and became genome editors, using the technique to delete or change specific “letters” in DNA much like a word processing program changes the letters of a document.

Although CRISPR would turn out to be much less precise than Word, it has nevertheless revolutionized genetics. It allows scientists to edit genes in order to probe their role in health and disease and to develop genetic therapies that, proponents (and investors in CRISPR companies) hope, will prove safer and more effective than the first generation of gene therapies.

In just the six years since scientists building on the laureates’ work got CRISPR to edit DNA in human cells growing in a dish, the companies CRISPR Therapeutics and Vertex have launched clinical trials using CRISPR to cure sickle cell disease and beta-thalassemia, while Editas Medicine is working on a clinical trial using CRISPR to cure a form of congenital blindness. Many other human studies are in the planning stages, with the goal of curing diseases as different as Duchenne muscular dystrophy, cystic fibrosis, type 1 diabetes, haemophilia, and more.

The diversity of diseases that might one day be cured with CRISPR reflects the fact that so many are caused by a DNA mutation and therefore could, scientists hope, be cured by correcting that mutation.

CRISPR can do that in either of two ways. It consists of a guide molecule (RNA) plus an enzyme that cuts DNA. Once the guide leads the enzyme to the site of the disease-causing mutation in the genome of cells, the enzyme cuts out the problematic chunk of DNA. The CRISPR molecules can stop there if removing the DNA is enough to cure a disease. Alternatively, they can carry an additional molecule, a repair gene, so that when the misspelt DNA is deleted then correct, non-mutated, healthy DNA can be slipped into the site on the genome where it had been and take its place.

This genetic magic holds the promise of curing not only adults and children — including devastating brain disorders such as Rett syndrome that might seem beyond the reach of any fixes after birth — but also of fetuses and embryos. If CRISPR can be slipped into an IVF embryo that carries a mutation that causes, say, Huntington’s disease or sickle cell or virtually any other genetic disorder, then the embryo will develop into a child who is spared that disease.

Chinese scientist He Jiankui stunned the world in November 2018 when he announced he had created the world’s first “CRISPR babies,” twin girls whose genomes had been edited when they were IVF embryos. He was immediately condemned by the scientific community for flouting ethical guidelines for embryo editing. Nearly two years later, an international group of experts warned that such human experimentation should not be conducted due to unresolved scientific and ethical issues. The commission did layout steps scientists should take before pursuing germline editing, should countries ever start to allow the procedure.

The development of CRISPR has been somewhat marred by an ugly legal battle over who owns the foundational patents on the discovery. A few months after Doudna and Charpentier breakthrough, scientists led by the Broad’s Zhang and, separately, George Church of Harvard University made CRISPR edit the genomes of living human cells in lab dishes.

Church told STAT he thinks the Nobel Committee made “a terrific choice,” one he didn’t find tremendously surprising, given the multiple awards that the pair has picked up in chemistry and biology. “But definitely, they made the key discovery,” he said, which was that “you can program … an enzyme, Cas9, to cleave at a particular place in DNA.”

Eric Lander, founder of the Broad, cheered the award winners in a tweet Wednesday morning.

Because of a quirk in the U.S. patent process, the Broad received patents on Zhang’s discovery in 2014 but the University of California did not. UC challenged that decision but lost before a patent office appeal board as well as in a federal appeals court in 2018. Last year the U.S. Patent Office began hearing a second Broad/UC patent dispute, and in a bit of a bombshell ruled last month that Doudna and colleagues had not demonstrated that CRISPR-Cas9 could edit plant and animal genomes in 2012, as their patent applications claim, and did not do so until January 2013. Zhang, the patent panel said, did so in December 2012.

Asked whether the Nobel would have any impact on the patent dispute, Doudna said “probably it won’t, but I think I’m just pleased the technology continues to be advancing quickly. … We are already seeing some [progress ] to make people’s lives better, including people affected by genetic disease.”

Only three people can share a Nobel, and naming just two collaborators appears to pick one camp. CRISPR has more mothers and fathers than Doudna and Charpentier, who have won a slew of predictive prizes for their work turning a bacterial immune system into a DNA editor. For example, Virginijus Šikšnys of Vilnius University shared the 2018 $1 million Kavli Prize in nanoscience for his CRISPR work. And Zhang of the Broad is more widely cited than the above three, another measure of impact.

The chemistry Nobel has set records previously. When Marie Curie won it in 1911 for her discovery of the radioactive elements radium and polonium, she became the first scientist to snare two Nobels. With her husband Pierre, she’d won the 1903 physics prize for studies of the radiation spontaneously emitted by radioactive atoms.

Doudna and Charpentier bring the grand total of women who have won the chemistry prize to seven. The tally for men is 185.

The two laureates will share a prize of 10 million Swedish kronor, or about $1.07 million.