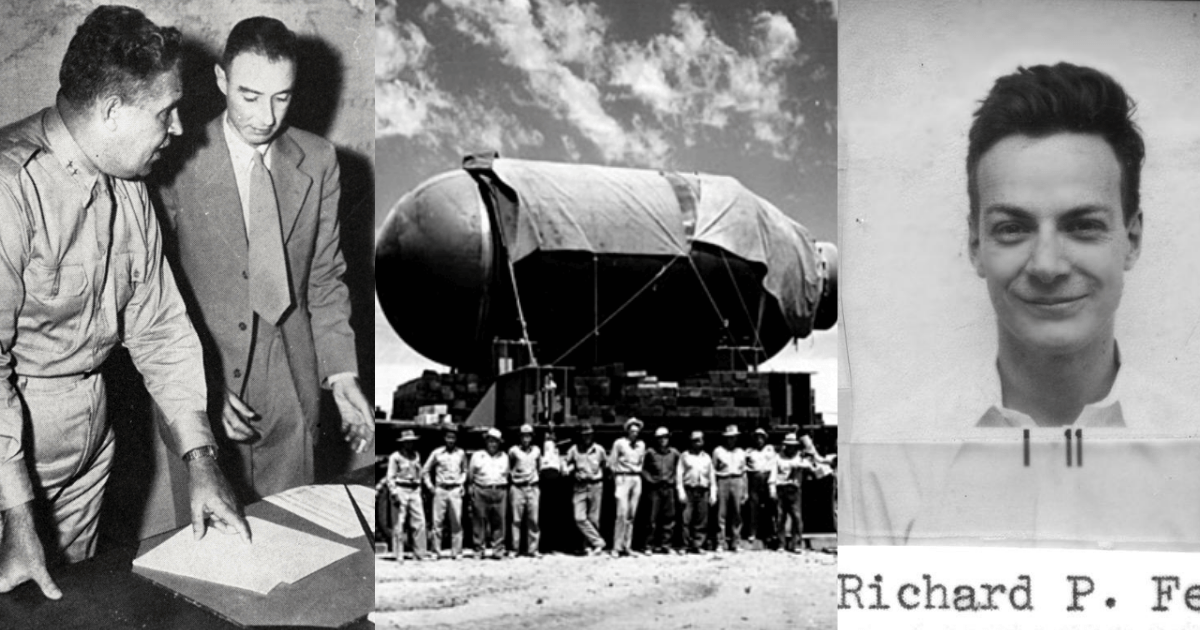 The Faces Behind it

Harnessing the spirit of the War during the Second World War, in order to push technological innovation to its limits, a project to build the first atom bomb was initiated in 1942 and extended through 1946 under the direction of Major General Leslie R. Groves. This project, officially dubbed the Manhattan Project harnessed scientists and resources of the United States supported by the United Kingdom and Canada, and sites across these countries were used for research and development.

The cost of this project amounted to about 2 billion dollars, from which 90% was owed to the establishment of factories and the development of fissile material (material capable of sustaining a nuclear fission chain reaction) and the mere 10 remaining percent, to the cost of development and production of the actual weapons.

As perhaps the scientist to have made the most important contributions to the advancement towards the nuclear age, physicist J. Robert Oppenheimer was, as the project was initiating, placed at the head of the Laboratory of the Los Alamos site where he undertook the direction of Project Y operated by the University of California before being replaced by Norris Bradbury.

During his time spent at Los Alamos, Oppenheimer first concentrated his team’s efforts on the development of a gun-type fission weapon, based on the shooting of a piece of a subcritical mass of fissile material into another, resulting in them merging into supercritical mass – the smallest amount of fissile material needed to sustain a nuclear reaction – before detonation.

However, the amounts of uranium required to sustain such were too large and the purity the isotopes of plutonium required were practically impossible to achieve, rendering gun-type fission weapons, also known as “Little Boy” or “Thin Man”, highly ineffective. As such, as the war progressed, Oppenheimer’s team’s focus shifted on building an implosion-type, dubbed “Fat Man”, in order to avoid problems with the impurity of the plutonium-239. For, due to the presence of plutonium-240 isotopes, the rate of reaction was increased.

Therefore, an implosion-type weapon would prove to be more adequate. This type of nuclear weapon consisted of compressing a subcritical mass of fissile material into a denser form of critical mass. Its development proved conclusive and the first test, Trinity, was conducted on the 16th of July 1945 in New Mexico.

Lastly, two famous scientists worked at Columbia University, as part of the effort to build the first atomic bomb, to create the first nuclear fission reaction which would lead to the development of nuclear reactor prototypes which, by the end of 1942 and after a series of modifications, were able to sustain the first nuclear chain reactions (the reactor went under the name of Chicago Pile-1).

Scientists involved in the development of fission methods

Part of the development of the atomic bomb consisted of the development of physical separation means of fissionable components such as uranium-235 or plutonium-239. Involved in the research around the fission of uranium aiming to develop a physical method to separate atoms of two different uranium isotopes from each other.

The first method which was developed and chosen was the electromagnetic process. Scientist Ernest Orlando Lawrence achieved uranium enrichment (the increase in abundance of uranium-235, less abundant than the more stable uranium-238, by a process of isotope separation) by creating a calutron: a mass spectrometer, at the University of California, Berkeley. Ernest Lawrence was a Nobel Laureate who had developed the first cyclotron.

Harold Urey, another notable scientist, contributed to the advancement in fission methods by proposing the diffusion method to enrich Uranium. This process, developed at Columbia University, consisted in forcing uranium isotopes through semipermeable membranes, and after several stages, separating uranium-235 and 238 into their pure forms. This method would eventually become recognized by and established as part of the Manhattan Project, and the enrichment of uranium, which would later be used in the first atomic bomb to be detonated, was conducted in large plants at Oak Ridge Laboratories.

There were many other notable scientists involved in the Manhattan Project. Some of them were Richard Feynman, Chien Wu, Maria Mayer, Niels Bohr, Hans Bethe, Arthur Compton, and James Chadwick.

Maria Mayer, the first woman to win the Nobel Prize in nuclear physics joined the Manhattan Project in 1942. She researched the chemical and thermodynamic properties of uranium hexafluoride and investigated the possibility of separating isotopes by photochemical reactions.

Chien Wu, aka the First Lady Of Physics, joined the Project in 1944. Wu worked alongside James Rainwater in a group led by William W. Havens, Jr., whose task was to develop radiation detector instrumentation. Wu was an exceptional experimental physicist. In the 1950s, there was a saying among the physicists that if an experiment is done by Wu, it must be correct. You can read more about Chien Wu.