Some days back, screenshots surfaced and went viral all over the internet of a group chat on Instagram named ‘boys locker room’ where some boys shared pictures of girls, objectified them and body-shamed them. Then a few days after that, screenshots of a ‘girls locker room’ emerged as well where the girls too indulged into similar acts of body shaming others. It has been chaos ever since.

The fight between male chauvinism and feminism is never-ending. The dynamics of the ‘locker room’ story are only going to get more complicated if fought in these realms. The problem is not the gender, both ways. Now, before someone gets a little aggressive here, hear me out – The classification of gender is not above the basic function of a human. What the screenshots of both sides, their relevance being unsure, portray is bad and unacceptable human behavior.

The problem lies in the faulty upbringing in some families, where men realize that they’re always going to be held in a higher strata as compared to women. And through no or some fault of their own, they psychologically develop chauvinist thoughts. The problem is the open promotion of such thoughts and encouragement of such nauseating behaviors which in turn fixate and validate such mentality. Each one of us needs to think that what idea would I be shoving into another person’s head by a particular activity.

Coming to the females, it really saddens my heart when I see one woman throwing filth on another. The problem is that for some unknown reason, women see each other as a competition and the extremely overwhelming desire to beat them up and climb to the top results in the other set of screenshots, where we see one body-shaming the other. But I would like to ask, to the top of what exactly? Feminism stands for women; “growth of women alongside other women”.

Talking of body shaming, body shaming from either gender is not justified. Plain and simple. Both are to be held equally wrong. Let’s be honest here, give others the same room of acceptance as you do to yourself. Every person is different and they are allowed to be. They are in no disposition to make sense to you or me or anyone. Let people be as long as they do not interfere or are a hindrance to your well-being.

Then again, the problem also lies in the mentality of those people who indulge in such activities. The problem to be dealt with in the school of thought which promotes this unacceptable mentality and further produces men and women who do not respect the other gender, which promotes scrutinizing and objectifying other people, body shaming and lastly, rape culture.

The aim here should not be punishing only the boys and girls who were in the ‘locker room’ group chats and then put the story to rest. They’re just a handful and a hundred others will still continue. The aim, in fact, should be to learn a lesson from this story- To uphold humanity, the concept of being a good human above all else. Above gender. When you teach, try, aspire for, and encourage good human behavior, all of this, literally all of this, automatically comes to an end.

Parents need to inculcate good and integral values in their children, and need to keep an eye out to eliminate any source of unwanted and incorrect thoughts and actions which hazards the positive mentality of a child. The internet is a vast and ever-expanding sea of all sorts of information, leading and misleading alike. It is a lot of work, but essential work to make a conscious effort and filter the kind of information that comes to you.

The educational institutions need to have a divergent focus and try and impart good social values, good education, and mutual respect between the two genders other than the mere completion of their respective syllabus curriculum.

The fight is not against each other, it is not man versus woman, but in fact, it is a fight against the long-prevailing mentality of putting other people down. Saying again, GENDER IS NOT THE PROBLEM. Inculcation and encouragement of vicious thoughts are. Lack of decency and humanity is. Undue and unfair favoritism of one particular gender is. Deal with that.

Everyone deserves to be treated with respect and humility, alike. Every person is perfect the way they are and no one gives another person the right to pin-point somebody else’s imperfections or comment on their appearance. The world is going through a lot right now, more than anybody could fathom of, and what we need the most right now, or ten years down the line, is love and respect. Let’s give it out as much as we can. And I promise it’ll be a happier place. 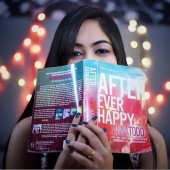 Happiness! That's what my parents had in mind when they named me. But I guess "Happiness" is so much more profound to be just a name. I wish to spread more of it through this blog, addressing and simplifying things we so often complicate ourselves. Happy Succinct Reading!!