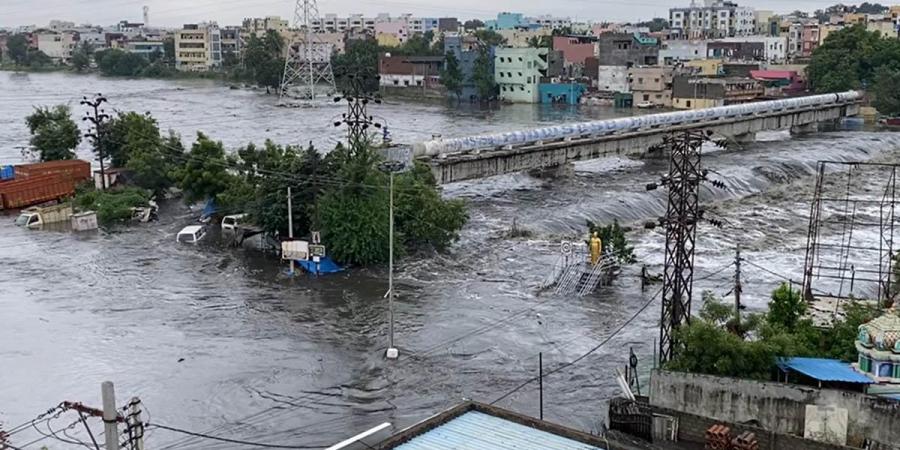 Last week we witnessed the worst flood in recent times, This took place in Telangana, Andhra Pradesh, Karnataka and Maharashtra.

WHY IT HAPPENED IN FIRST PLACE?

There are many several reasons for this but these are the major highlighted ones. In the 1900s a cloud burst caused floods in Musi that claimed 15,000 lives and rendered 80,000 homeless, after this incident, Sir Visvesvaraya made amends after that by doing some studies, That’s how two reservoirs Osmansagar and Himayatsagar came up to act as flood control centers. A modern system of drainage was also built. Despite this, in August 2000 we witnessed one of the worst floods in the city since 1908, where the city recorded 469 mm rain.

Another reason for this is over the years, we dumped all the industrial waste and sewage into the lakes, the waste accumulated and has now affected the holding capacity of the lakes, as a result when continues heavy rainfall starts, lakes can’t hold the water and gets over flooded. Hyderabad has 12 to 14mm drainage capacity but as we can see from this graph from the past many years the rainfall was on an average of 160 to 200 mm.

On the 12th of October heavy rainfall downpour, the Telangana which leads to blockage of water sewage pipes and caused flood in many areas, Heavy rains and floods across the state have disrupted power supply in many places. The state government declared a holiday for all government offices and private institutions for 14 and 15 October and urged people to stay indoors.

Hyderabad, is among the worst affected areas, with raging floodwaters sweeping through city streets, damaging buildings, and dragging away vehicles. 9 people died when a wall collapsed due to heavy rain in Chandrayangutta District, according to disaster authorities. Over 1,000 people have been rescued or evacuated in the city by teams from State and National Disaster Response Forces along with military personnel.

A high of 25 cm rainfall has been recorded at LB Nagar. City officials said parts of Greater Hyderabad recorded 324mm of rain in 24 hours to 13 October, the highest on record. Municipal administration minister KT Rama Rao, who held a review meeting on the flood situation in the city, urged the officials to take up all necessary measures to address the situation arising out of the deluge. Observing that there was a likelihood of a sudden outbreak of epidemics and the spread of water-borne diseases, medical camps should be set up in the city.

The 104 ambulance service equipped with doctors and medicines should also be arranged at all the places. Around 44,000 people were put up in 64 relief camps and 45,000 food packets were provided. Telangana faced a loss of Rs 5000 crore, Later the CM urged Rs 1,350 crore support, from the PM Narendra Modi and the CM is also reviewing agriculture and controlled farming.

In Andhra Pradesh, heavy rains caused damage to roads and disrupted power supply in several districts including West Godavari, Krishna, Kadapa and Guntur, affecting 150,000 people. An official stated that around 400+ houses were damaged and 6,616 people evacuated with 4,864 of them staying in 32 relief camps.

At least 9 people have died in flood. Chief Minister YS Jagan Mohan Reddy, who reviewed the situation, directed the Collectors of the two districts to immediately distribute ₹ 2,000 each to the flood-hit families. Standing paddy crop in over 2,385 hectares was destroyed in the district while cotton in 225 hectares and horticulture crops in over 5,000 hectares were also affected.

In the state of Karnataka, DMD report that flooding has affected 150,000 people in the state in areas of Kalaburagi and Bidar districts from 13 October. A total of 316 houses have been severely damaged or destroyed and 2,695 damaged. Over 40 relief centers have been set up and as of 14 October, were housing 4,864 people.

One fatality was reported after a house collapsed due to heavy rain. Levels of the Kagna river at Malkhed in Gulbarga to reach “Extreme Flood Situation” on 13 to 14 October, according to DMD.

Due to heavy rain, floods caused parts of a wall of Kumbhar Ghat on the Chandrabhaga River in Pandharpur in Solapur district in Maharashtra, in Mumbai and in several other districts power cut becomes the major issue for people.

The NDRF has deployed two teams in Maharashtra, one each in Latur and Solapur to rescue people affected due to heavy rainfalls in the area, till October 15 nine people lost their lives, and 4 people were reported missing lately.