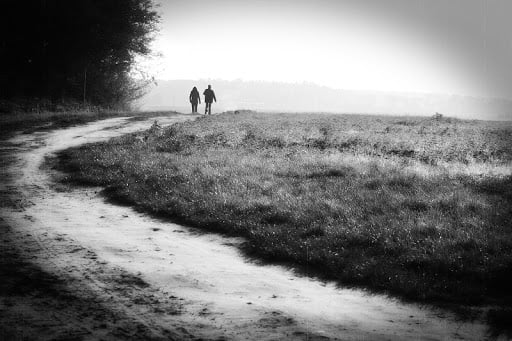 He was walking on the mildly lit pavement, considering his life’s instances. The tortured life that he was experiencing. Every incident forced him to chain himself, confine his feelings, emotions, thoughts to himself. Every thought began as an electric impulse in his brain and would eventually end up hurting him more than a lightning bolt. Because every time he loved, he lived or he took a breath he was trapping himself inside his heart.

Today was the last nail in the coffin. He was hurting himself and everyone near him with lies, hatred, and the poison of anger. He hated himself.

Walking by the road his mind was already a fuzzy nightmare. He wanted to end it once and for all. End all his suffering and the suffering of his loved ones. He was considering the ways in which he could embrace death. One by one he was ticking them out of his list. Hanging himself would need too much equipment. Poison was not foolproof. Jumping off the roof of a high building would be good. But there were no tall buildings in the vicinity, so that was out of the question. In the end, his anger took him through the route that ended somewhere in the dark corners of his mind.

What a good option. Secure and only a little painful. And he just needed a blade which was very easy to get.

But then he noticed. Someone was following him. A worker on a bicycle was slowly riding behind him. Maintaining distance but not at all increasing his speed.

He stopped. The worker stopped his bike near him and smiled.

“Where is your cycle? ” the worker inquired with the same radiant smile.

“Sorry! I don’t have one. I think you have mistaken me for the wrong person. ” he answered irritated, trying to get rid of him.

“Oh! I am sorry. I used to see a boy with a bike every day. You resemble him a lot.” He apologized, ” By the way, I saw that you were really sad. I thought I should talk to you.” he smiled again.

The boy was taken aback. He was a stranger to this person. But still, his sadness bothered him so much that he came to enquire. He became a little suspicious. What if this man was a pedophile and was just trying to tempt him.

” No problem son. Just remember that you will be tired at times in your life. But you should rest at those moments. There will be so much pressure in life. From parents, from girlfriends, from friends, of studies, of relationship, of future. But when you will be old, you will have retired from a job, will be sitting with your wife, talking about the times you had fun with your friends. And you will be smiling. It’s late, go to your room, and relax. “

Saying that he smiled, turned his cycle and pedalled away.

The boy kept looking at the man. The man did not turn, just kept on pedaling forward. The boy just remembered his smile. Not his clothes, not his face just his radiant smile.

He turned and started walking on the mildly lit pavement, considering his life’s instances.

And today was the last nail in the coffin.

And thinking this he smiled.

The thought began as an electric impulse and eventually ended with the smile.