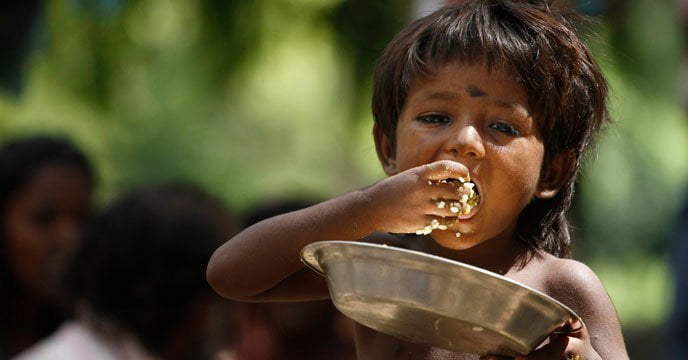 Among all the insecurities India faces Food insecurity is critical & needs to be dealt with the same alacrity as the one with Chinese intrusion.

For developing countries among many crises, the humanitarian crisis is abject and needs a positive response from the state. It’s palatable that lockdown has added to the woes of the already stuttering food security but even before the pandemic, the state of affairs on hunger and it’s possible annihilation was worrying. In the Global Hunger Index 2019, India bagged 102nd rank out of 117 countries signaling that our citizens are likely to die of hunger than their counterparts from far more weaker economies & institutional frameworks. Since South Asia comes into the league of the regions with great income disparities & an acute food insecurity too. India contributes to almost 21% of the food insecure population of the world. A vast section of our population is undernourished and our children malnourished. According to the national family health survey (NFHS-4), the rate of wasting in children was up from 19.8% to 21%. Only 3 countries- Djibouti, Sri Lanka & South Sudan apart from India have such low indicators. According to the Oxfam report in the aftermath of the pandemic, an additional 100 million will be vulnerable to aggravated food distress. Especially women & households headed by women are more prone.

A further report released by UN agencies ( SOFI 2020) on the state of food security & nutrition in the world shows some appalling results as 18% of population of the south Asia can’t afford a nutrient adequate diet while 58% can’t afford the healthy diet. According to this report, the cost of energy sufficient diet which consists of cereals only, in south Asia is 80 cents, for a nutrient adequate diet it’s $ 2.12 and for a healthy diet, it’s nearly $4.07. As per the Tendulkar committee, the poverty line 2011-12 corresponds to the ability to spend for rural areas as 27 rupees per person per day & for urban -33 rupees per person per day which is nearly $1 in PPP terms way below the international parameters. Thus there’s an urgency to incorporate changes into our approach to define the poverty line first & then rigorous spending must be done to bring the poorest of the poor under food security. NFSA 2014 was a step in the right direction with an ambitious aim to cover 75%of rural &50% of urban population, yet there are still are people the poorest 1% who are struggling to avail such benefits.

This pandemic has exacerbated certain cliches one such is ‘with great problems come greater opportunities’. It’s not an opportunity but a necessity to provide three time’s meal to all irrespective of their caste, creed, religion. We have the institutional framework in terms of a PDS which is eroding with burgeoning corruption, ICDS has done some great service in terms of keeping the number of children dying with hunger as low as it was equipped to do. Mid-day meals apart from providing nutrition have attracted children towards education, new NEP also emphasizes on providing nutritious breakfast for the all-round growth of children at every stage which is a welcome step.

All these instruments are available to really unleash the output on the ground yet the need is to make them robust. The spending on nutrition must be increased to protect our demographic dividend, as according to a report on world population forecasts by the Institute of ‘International health metrics & evaluation’ suggests that India is likely to have the youngest workforce. If the future of our country isn’t saved from the wickedness of starvation then our republic will surely fail. Gandhiji said that poverty is the worst form of violence, hunger is the worst form of oppression then. It’s never too late to make the right choice, to take the determined decision, to work for the prosperity of all. The era of famines in India is over, our children and people deserve a caring state that believes in the rhetoric of human values & upholds the constitutional commitment to empower all.