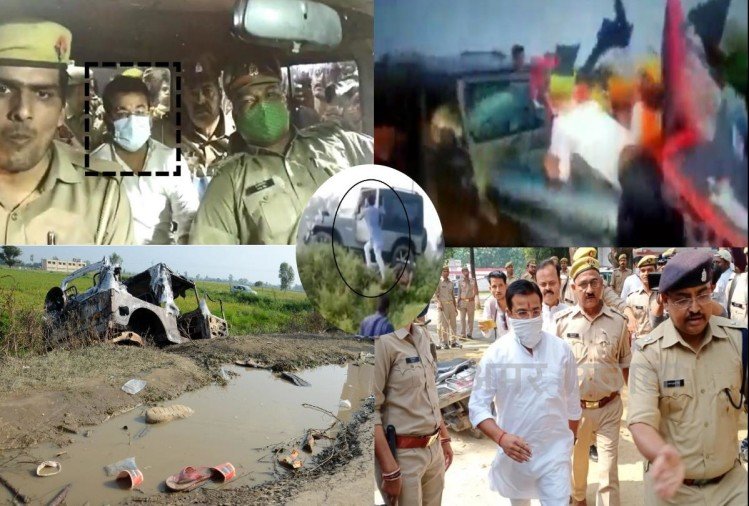 Contents
THE EVENTS OF OCTOBER 3 (ground report by newslaundry)AFTERWARDS

That day, in Uttar Pradesh’s Lakhimpur Kheri district, eight people died and many were left injured. It was alleged that a convoy of three vehicles, including one driven by the minister’s son Ashish Mishra, rammed into a crowd of farmers who were protesting in the area. The incident took place at around 4 pm.

A 29-second video posted on Twitter showed the three vehicles speeding into a crowd of farmers walking on a road. A farmer was thrown onto the bonnet of one of the cars, which did not slow down, Four people died immediately, Soon after, two of the vehicles a Fortuner and a Thar overturned on the side of the road and allegedly caught fire. Videos showed angry farmers beating up a person who was in one of the overturned vehicles.

By 7 pm, seven people had died: four farmers, two BJP workers, and the driver of one of the vehicles, Additionally, a journalist covering the protest died as well. His body was found in the mortuary with gunshot wounds, taking the total death toll to eight, Soon after, Ashish Mishra told ANI that the three vehicles were on their way to meet Uttar Pradesh deputy chief minister Keshav Prasad Maurya when farmers began “pelting stones”. He was not present, he said.

The BJP workers and driver were subsequently “dragged” out of the vehicle, he said and killed. “I have not been near the protest site for two days,” Ashish said, Meanwhile, his father said his son was attending a wrestling match with him at Banveerpur, his hometown, at the time of the incident, in the company of deputy chief minister Keshav Prasad Maurya. “My son was present at the deputy chief minister’s event all through and I was with Mr. Maurya too,” he told NDTV. The minister also blamed the violence on a “Khalistani hand”.

THE EVENTS OF OCTOBER 3 (ground report by newslaundry)

The farmers’ protest in Lakhimpur on October 3 was triggered by a speech by Ajay Kumar Mishra on September 25, according to Jot Singh, a resident of Tikunia. The minister was speaking at a “public gathering”, though it’s unclear where. Referring to the farmers, he said, “Face me, it will take just two minutes to discipline you fellows.”, The two-time MP said he would ensure that the farmers not only “leave Palia”, but “Lakhimpur itself”. The speech was reportedly in response to farmers who had waved black flags when he had visited Palia in early September.

On October 3, Uttar Pradesh deputy chief minister Keshav Prasad Maurya and Ajay Kumar Mishra were set to land by helicopter in Tikunia to attend a local wrestling match in the latter’s native village of Banveerpur. The farmers had gathered in protest at the Maharaja Agrasen College ground, which was to be used as the helipad for the leaders.

Dilbagh Singh, who was present there that morning, told Newslaundry that the wrestling match was scheduled to begin at 11.30 am. Before Mishra and Maurya arrived, the district magistrate told the farmers they could continue their protest at the spot and that Mishra and Maurya would take a different route to attend the event, So, the two of them traveled by road instead of by helicopter. Both the minister and the deputy chief minister then attended the event, which ended by late afternoon.

The farmers, meanwhile, continued to camp out at the college ground. By 4 pm, when Mishra and Maurya had not turned up, they prepared to leave, “Everyone was kind of relaxed,” said Jogmittal Singh, a local farmer who was at the protest. “A langar had been prepared so everyone was busy eating food. Those who had eaten were starting to leave. Then, we saw one Fortuner, one Scorpio, and a Thar coming towards us at full speed.”

The three vehicles did not slow down as they neared the crowd, Jogmittal said.

“Some of the farmers could not move away in time and got caught under the vehicles,” he said. “The vehicles did not slow down and bodies were dragged along the road. Meanwhile, the Fortuner lost control and toppled onto the side of the road. Two men from the other vehicle began firing. There was so much dust that initially it was tough to see what was going on.”, Two of the vehicles overturned, By then, Jogmittal said, everyone started screaming, “Men have died, men have died.” Another vehicle also lost control and toppled over. “That’s when the shooting began,” he said. “One farmer was shot at his temple. I heard the sounds of the shooting.”

Nevertheless, preliminary autopsy reports have revealed that all four farmers died from hemorrhage and trauma and no one died from a bullet injury, Gursevak Singh, another witness, showed Newslaundry a video of the three vehicles speeding into the farmers’ protest.

“The farmers tried to rush towards the injured men but everyone stopped when they heard the firing continue,” he said. “The men from the car were continuing to fire in the air as they ran into the lane. The police also ran after them to protect them.” The police had been present already because of the farmers’ protest, Newslaundry was told.

Gursevak said three people later identified as two BJP workers and a driver died when their vehicle toppled, despite videos showing the farmers thrashing the driver, Jogmittal said, “When the protesters saw the farmers being dragged by the vehicle, they did get angry.”

“He is the son of a leader,” he said, “everyone here knows him.” Jogmittal himself did not see Ashish Mishra.

Talvinder Singh, another eyewitness, and a local farmer said he saw Ashish driving one of the three vehicles that rammed into the crowd. “Ashish Mishra fired and ran,” he said. When asked to elaborate, he said: “I saw Ashish fire in the air as he ran into the lane. So many people saw him.”

Four eyewitnesses Jogmittal, Gursevak, and two others who did not want to be identified showed Newslaundry a video clip, which they claimed showed Ashish “loading a pistol”. The video clip was taken from a Facebook Live session shot at 3 pm, shortly before the incident took place, at a rice mill about three km from the protest site, according to Gursevak Singh.

But the clip is very blurry. Even though several other locals identified the man in the video as Ashish, Newslaundry could not independently verify the video, it isn’t clear if the person in the video is Ashish or even if he’s loading a pistol, Minister Ajay Kumar Mishra told NDTV, “If my son had a revolver, it would have been licensed. I was not there. Neither was my son.”

Newslaundry also spoke to the family of Asad, 30, a labourer who lives on the street where the incident took place. Asad’s wife said that at 10.30 am on Sunday, the farmers began their protest on the street, By late noon, she heard a commotion “loud noises” and “lots of dust rising”. When asked if she heard gunshots, she said, “It was all so loud and scary. I couldn’t tell whether it was gunshots or not.”

So, she said, most of the local women “gathered our children and ran behind the house towards the field”. She added, “But while running, I heard people shouting, ‘Monu bhaiya, Monu bhaiya’.”, “Monu bhaiya” is how the locals refer to Ashish Mishra.

On October 3, demanding the arrest of Ashish Mishra, the bodies of the four farmers were placed at the protest site through the night. Mobile internet was suspended and Section 144 was imposed in parts of the area, On the morning of October 4, politicians like Priyanka Gandhi Vadra and Akhilesh Yadav tried to make their way to the area. They were stopped and detained. The roads to Lakhimpur Kheri were also blocked at multiple points by farmers.

The same day, Bharatiya Kisan Union leader Rakesh Tikait engaged in multiple rounds of negotiations with the local administration. Around 2.30 pm, the Uttar Pradesh government said that compensation of Rs 45 lakh and a government job would be given to the families of the farmers who died. Rs 10 lakh was also promised to farmers who have been injured, Post this negotiation, the four bodies were taken for postmortem to the Lakhimpur Kheri district hospital. It was also agreed that a retired high court judge would probe the case.

Meanwhile, two FIRs were filed at the Tikunia police station. The first was filed against Ashish Mishra and 13 others under penal sections including murder, criminal conspiracy, rioting, and causing death due to reckless driving. The second FIR was filed by one Sumit Jaiswal against unidentified persons for rioting, causing death by negligence, and murder, The family of the journalist killed that day has also accused Ashish Mishra and his aides of murder.