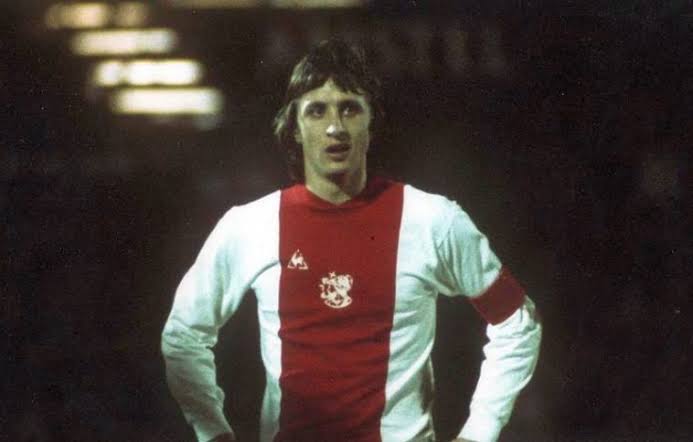 “Someone who has juggled the ball in the air during a game, after which four defenders of the opponent get the time to run back, that’s the player people think is great. I say he has to go to a circus.”  There are very few players and managers who change the whole dynamics of football and are forever remembered for their contribution to the game. Football had never seen a revolutionary like Cryuff who not only established himself among the likes of Maradona, Pele, Di Stefano and Ferenc Puskas but also proved to be a great thinker and changed the way people saw and played football, with the ideology of ‘Total Football’ he brought a complete revolution in Barcelona as the Manager.

Johan Cryuff in his teenage joined the Ajax Academy through the hard work and determination he had for the game. His mother worked as a cleaner at the Ajax Facility and therefore learned the routine of young players at a very early age. Rising through the ranks he made the debut for the senior Ajax side at the age of 17, not many knew that the teenager would one day be regarded as the greatest player Ajax ever produced.

The Amsterdam side, Ajax, won six league titles, five dutch leagues, and three European cups and took the whole European football by shock, his individual performances were rewarded by naming him the European Player of the Year( Ballondor)three time in the year 1971, 1973 and 1974. His exemplary performances for Ajax attracted Barcelona and the wonderboy for Ajax was brought by the Catalan club for a then world-record fee of £922,000.

Johan Cryuff in his first season itself ended a fourteen-year drought of La Liga title for the club. Cryuff joined his national team for the World Cup in the year 1974 and helped Holland( Netherlands) reach the 1974 World Cup final knocking out Brazil and Argentina, scoring a brace against the former and netting one against the latter, eventually falling short against West Germany. Though Johan Cryuff never won the World Cup he was awarded the Golden Ball and was deemed as the best player of the tournament.

Cryuff made a return to Ajax soon after hanging up his boots because of his post-retirement plan failure. In 2008, Cruyff stated to the journalist Antoni Bassas in Catalunya Ràdio that he and his family were subject to a kidnap attempt in Barcelona a year before the tournament, and that this had caused his retirement.

“To play a World Cup you have to be 200% okay, there are moments when there are other values in life.” and it was cited as the main reason for his retirement at an early age of 31 years. In his second spell at Ajax he again helped Ajax lift two consecutive League titles in 1981-82 and 1982-83 season after which he joined Feyenoord and helped them win the League Title in 1983-84 season.

“Technique is not being able to juggle a ball 1,000 times. Anyone can do that by practicing. Then you can work in the circus. Technique is passing the ball with one touch, with the right speed, at the right foot of your teammate.”

Inspired by his Ajax coach Rinus Michels, also his mentor, Cryuff started his managing career at Ajax in the year 1985 and helped the Ajax side to win the KNVB Cup. It was during his time at Ajax that he started playing a 3-4-3 formation with a defensive midfielder and two controlling midfielders with side-line hugging wingers and a versatile striker.

The ideology of Total Football was imbibed by his mentor which meant controlling the whole game by possession and making space for other players to exploit. The Ajax side won the 1995 Champions league under Luis Van Gaal with the same strategy, as a tribute to Cryuff legacy. In 1988 Cryuff left Ajax and joined Barcelona but this time as the manager of the club.

He remodeled the club and had asked the President Nunez to establish an Ajax like academy for young talents before leaving Barca as a player. Under Cryuff the Catalan club won consecutive la Liga title for four years from 1991-1994 along with the Champion League in 1992 the first in Barcelona history.

The team managed by Cryuff was termed as the Dream Team and it was under his era that Barcelona emerged as a powerhouse club that continued its glory. The concept of Tiki-taka was Cryuff’s gift to the Barcelona system, he made sure that the young talent was nurtured with the same ideology and thereby giving us the likes of Guardiola, Rijkaard, and Koeman. Cryuff left Barcelona in 1996 as the Manager but was always associated with the club as an unofficial advisor.

Guardiola said: “Johan Cruyff painted the chapel and Barcelona coaches since merely restore or improve it.”

It wouldn’t be wrong to say that Barcelona inherited the ideology of Cryuff in such a way that it became a legacy in itself. The hiring of coaches and the signing of players were done in such a manner that they could fit into the Barcelona style of play.

Yes, today the possession game is affiliated to Barcelona more than any other club, Cryuff was the most successful manager for Barcelona with eleven titles in his tenure, a record which was later broken by one of his student Pep Guardiola when he returned to Camp Nou as a manager.

Players like Xavi, Puyol, Messi, Iniesta, Busquets are all products of La Masia and Ajax like setup asked by Cryuff to be established. A statue in his memory is established outside Camp Nou and the stadium of Barcelona B is renamed after Cryuff. Barcelona is what it is today because a revolutionary known as Johan Cryuff stepped at Camp Nou to change the course of history.

I’m ex-player, ex-technical director, ex-coach, ex-manager, ex-honorary president. A nice list that once again shows that everything comes to an end.- Johan Cryuff