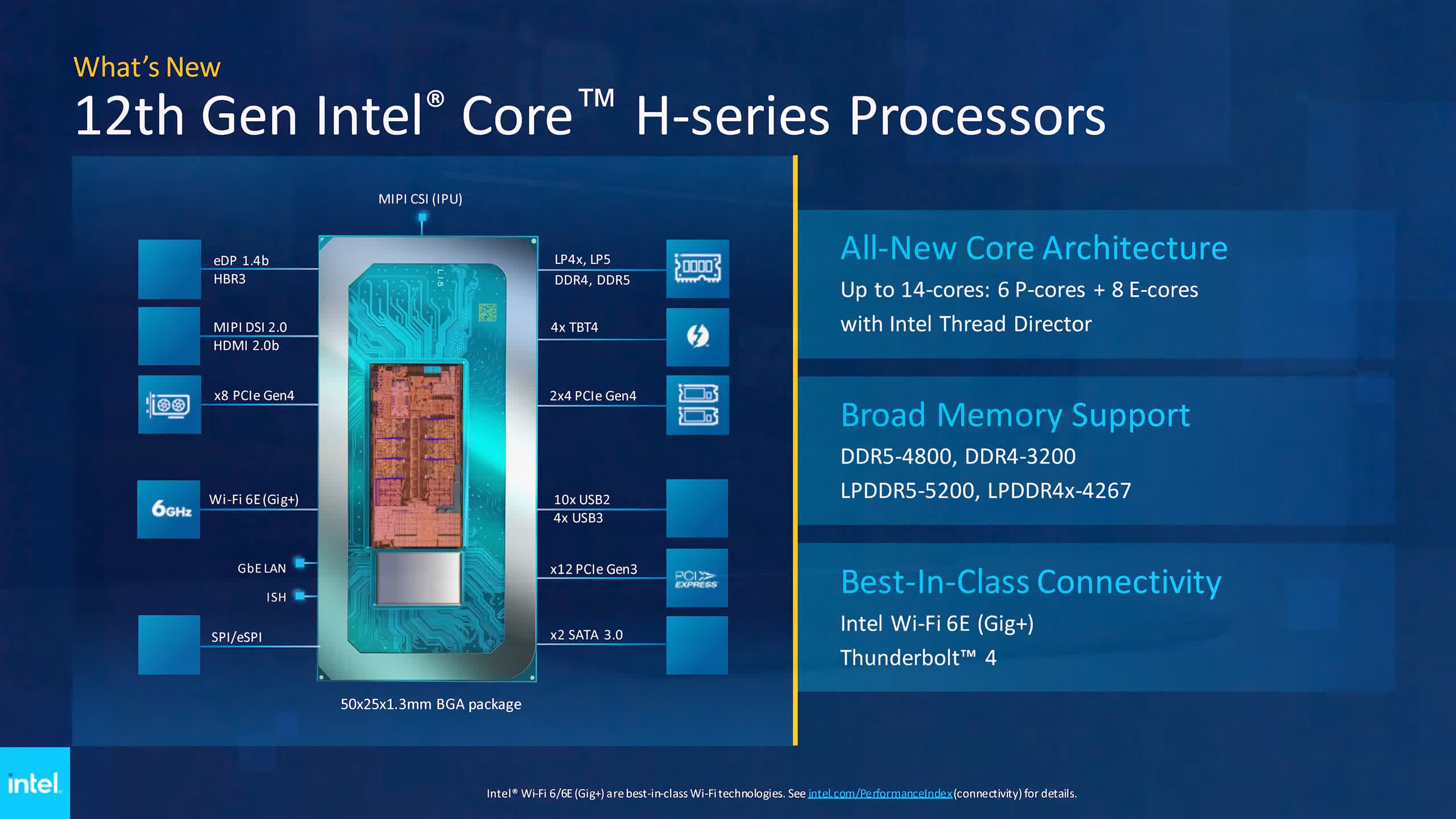 Alder Lake is Intel’s first serious step into the world of hybrid architectures, combining a new high-performance CPU architecture (P-Cores), with smaller efficient cores also known as E-cores, for better performance and enhanced performance per watt. This is our first look at 12th-gen Core mobile processors, starting with the Core i7-12700H.

As we’ve discussed at length in our desktop Alder Lake reviews, this hybrid approach has been reasonably effective on desktop machines, but the dual architecture approach should really come alive in constrained form factors like laptops, where power consumption and efficiency are key.

The Alder Lake H-series targets high-performance laptops, while also bringing a range of new platform advantages, including DDR5 support, a beefier Xe integrated GPU, and other connectivity improvements. Intel claims these new processors should be the fastest ever seen for mobile computing and we’ll be exploring that later in our benchmarks.

We expect the Core i7-12700H that we’re reviewing today to become the most widely used chip in Intel’s line-up, like the Core i7-11800H and Core i7-10750H before it, slotting right into a huge range of mid and upper-midrange gaming and productivity systems.

The P-cores are clocked at 2.3 GHz base and 4.7 GHz boost, while the E-cores get a 1.7GHz base and 3.5 GHz boost clock. Like prior Intel products, the default TDP for this chip is 45W, though many laptop OEMs will have modes to enable higher long-term power limits.

The Core i7-12700H is the lowest chip in the stack that still provides the full complement of CPU cores found in Intel’s H-series die, making it a compelling option. The 12800H, 12900H, and 12900HK that sit above it are essentially just clock speed improvements, and in previous generations, simple clock speed bumps haven’t been a great value proposition for buyers.

The Core i7-12700H is the fastest laptop CPU we’ve tested to date, beating all other contenders including the Ryzen 9 5900HX and Apple’s M1 Pro, even when run at just 45W.

We’ll look at power scaling in more depth later, but these early results show the 12700H is able to produce a decent amount more performance when allowed to run beyond 45W in longer term workloads.

I should note that the M1 Pro is included in our 75W charts for reference, but one limitation of Apple Silicon is that it can’t be run above default power spec, so it’s a roughly a 40W part up against 75W configurations. It is possible the M1 Max version will be faster and scale power further, but we haven’t tested that chip.

This is achieved without consuming more single-thread power than other x86 processors, though the Arm-based M1 Pro is significantly more efficient.

Handbrake isn’t as favorable for the 12700H when looking at x265 encoding, but the performance gain relative to older Intel parts is still impressive. This new CPU is 15% faster than the Core i7-11800H and holds a narrow lead on the 5800H from AMD, but can’t quite match the 5900HX, losing by 4%. This is one of the tougher workloads for Alder Lake but it still holds its own.

However at 75W, the 12700H is able to pull ahead of the field. While just 3% faster than the 5800H at 45W, it’s now a very solid 22% faster, owing to Alder Lake’s great scalability up to higher power levels. So if you do get a laptop with the cooling power to handle higher long term power, the 12700H is the way to go.

Blender CPU rendering is similar to the Handbrake results, in that the Core i7-12700H at 45W sits among the pack that includes the 5900HX, 5800H and M1 Pro, while delivering a 25% performance gain over the Core i7-11800H. That’s a great generation on generation improvement, however in this workload it’s only able to close the existing gap between Intel, AMD and Apple.