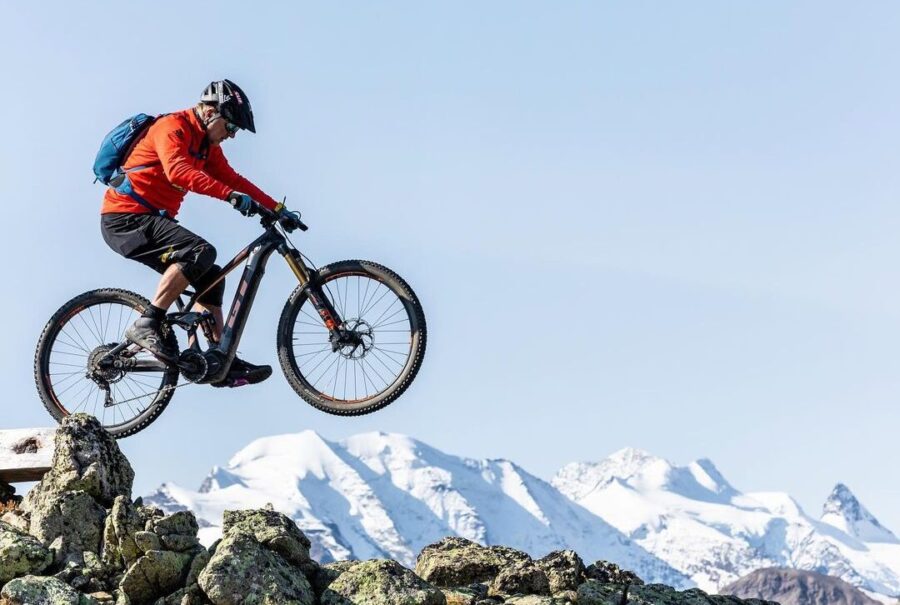 Hans Rey, multiple Trials National and World Champion, is one of the pioneers of Trials and Extreme Mountain Biking. Through his spectacular mountain bike trials shows and adventures, Hans has made himself a name far beyond the mountain bike scene. His skills and image are constantly opening the doors to media coverage all over the world; “No Way” Rey has been demonstrating his talents in over 60 countries.

Contents
1) How did your journey begin?2) Who has been your inspiration?3) Tell us about your very first mountain biking adventure.4) How has life been on two wheels? 5) Tell us about your journey from a mountain biker to a stuntman.6) Which has been your most memorable ride? 7) Tell us more about the Trial Riding World Championship.8) What are your upcoming projects?9) How was life in quarantine?

Hans earned recognition with his jump over a car on the 405 Freeway in Los Angeles, with his volcano dance in Hawaii, his underwater bungee jump, or his Machu Picchu Adventure. Besides his own successful video series he was also chosen as stunt coordinator and stuntman in Willy Bogners motion pictures “Fire, Ice, and Dynamite” and “White Magic”; as well as in the TV Show “Pacific Blue”, where he occasionally has a guest appearance as himself. He’s also been featured and hosted numerous TV shows and programs. At the 1996 Olympic Games Hans was part of an Extreme Sports Act and performed in front of 3.5 billion viewers in the Olympic Closing Ceremonies.

Here is Hans Rey in a conversation with GOGO Magazine.

I grew up in Germany where I started to ride Bicycle Trials with my mates when I was 13, this was a new sport at the time. I became one of the best riders in Europe. When I was 20 years old I received an invitation to come to California to show Americans my skills, as Mountain Biking was just about to boom in the late 80ties. My life was about to change. I met the right people at the right time, biking exploded and I never went back to Germany. Almost 35 years later I’m still a professional bike athlete.

Many people have inspired me in one way or another. Be it some of my competitors, but also athletes from BMX or motorcycle racing, extreme skiers like Glen Blake and Scott Schmid made me want to become an ‘Extreme Mountain Biker’. I was the first to do this kind of riding and filming videos (long before the internet took off). Later as Freeride became established, I transitioned to become an adventure biker, riding many expeditions in remote and not so remote locations. In 2016 in Summit Mount Kenya and Mount Kilimanjaro on a bike. Lately, I’ve been pursuing my urban adventure trips in some of the biggest cities, showing the contract between the urban jungle and the beautiful nature that surrounds some of these cities. A lot of my films can be found on my Youtube channel.

3) Tell us about your very first mountain biking adventure.

One of my first exotic adventures was on the ancient Inka Trail to Machu Picchu in Peru. That was an amazing trip. Since then I have travelled to over 70 countries. One of my more memorable adventures was in India, when we when to the mysterious Roop Kund Lake in the Uttarakhand region in the Himalayas.

4) How has life been on two wheels?

It has been like living a dream, being able to earn money and travel the world with something you love to do is a blessing. That’s one of the reasons why I try to give back and support others. In 2005 I started a non-profit charity ‘Wheels 4 Life’, we give bicycles to people in need of transportation in developing countries.  http://www.wheels4life.org

5) Tell us about your journey from a mountain biker to a stuntman.

My first role as a stuntman and stunt coordinator was in 1990 when Willy Bogner hired me for his film “Fire, Ice and Dynamite” starring Roger Moore and many of the worlds best extreme sports athletes. This was the first-ever extreme sports film. But also living near Hollywood I would receive occasional phone calls for commercials. Around 1995/96 I started doing stunts for the TV series ‘Pacific Blue’, it was about the Santa Monica Bike Police. I worked on this show for several years and I even got to play myself, as ‘Hans Rey’, in some of the episodes.

6) Which has been your most memorable ride?

There have been so many unforgettable highlights. Standing on top of Kilimanjaro was definitely one, or performing tricks at the Atlanta Olympic Games Closing Ceremonies, riding on volcanos and glaciers; as well as riding with Presidents and monkey’s.

7) Tell us more about the Trial Riding World Championship.

Trials Biking is a sport where riders have to ride up and over obstacles without putting their feet on the ground. The sport has immensely evolved over the years. I won many different championships and became known to have inspired many riders from around the world, including youtube sensation Danny MacAskill.

8) What are your upcoming projects?

I plan on doing another one of my Urban Adventures this summer. This time we will traverse San Fransisco the city and surroundings have so much to offer and it is the birthplace of mountain biking where the Mountain Bike Hall of Fame is located. I also plan on going back to the mountain resort town of Livigno in the Italian Alps. I’ve been riding the Carosello3000 Mountain Park for many years, they have some of the best mountain bike trails and infrastructure in the world, including the famous ’Tutti Frutti Epic’ Tour, which includes 10 of the best trails in one tour – with the help of a gondola riders get back to the top.

I’ve been enjoying some time with my wife and at our homes. After travelling all the time for nearly 40 years I welcomed a little break, but now I’m ready to travel some more. Last year when the first phase of the lockdown in America came to an end, I rent and RV with my wife and dog we did a two week long road trip to Colorado and Utah. We rode and visited many cool National Parks and riding destinations.