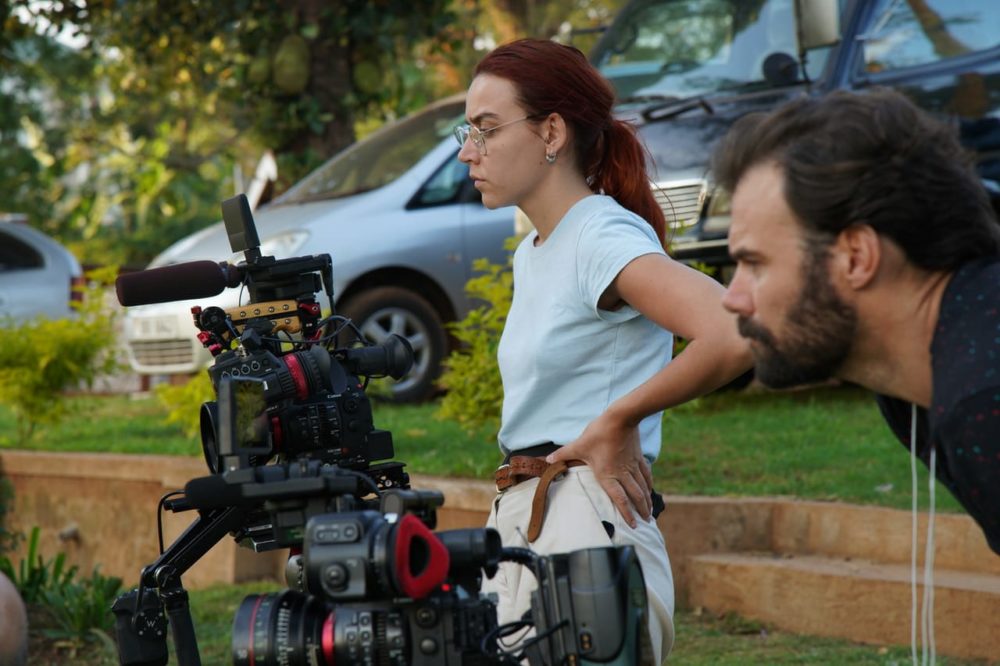 Mollie Moore is a documentary filmmaker originally from South London. Mollie started her work in the theatre and narrative world but discovered her passion in documentary filmmaking after leaving the UK at 19 years old and discovering the world for herself, with a camera in hand. After moving around for 4 years she settled in New York City to establish herself in the documentary world and has gone on to make three films in collaboration with filmmaker Lucia Florez, as well as work as a cinematographer on many other projects. Her work focuses on forced migration, LGBTQ+ issues, and women’s rights. With a background in cinematography, her work pushes the limits of visual poetry through non-fiction storytelling. She is currently working on the artist Marc Quinns ‘Our Blood’ project.

Contents
1) When did your journey as a filmmaker begin?2) Who has been your inspiration?3) What did you learn from making the film ‘Paper Thin’ ?4) What message do you think ‘Paper Thin’ has?5) What do you think lacks in society in terms of understanding the LGBTQ community?6) How’s life in quarantine?

‘Paper Thin’ is a story of 21-year-old Anton who left his hometown in East Russia to move to New York City after facing violent attacks and persecutions because of his gender identity. Now, while starting his transition to a woman, Anton applies for political asylum in the US with the dream of starting from scratch and creating a free future. Mollie Morie has worked as Director of Photography in this film.

In a conversation with GOGO Magazine, here is what the documentary filmmaker and cinematographer Mollie Moore has to say.

1) When did your journey as a filmmaker begin?

I began in film after leaving school at the age of 18. I worked on fictional sets as a runner and a PA. I was lucky enough to get some jobs in the film whilst I was traveling in different parts of the world. Whilst living away from home I realized that my passion was in telling real stories and I merged that idea with the path I had already been taking. This eventually led me to New York City.

There are many filmmakers that have inspired me. I love the work of Andrea Arnolds and her style of storytelling and the cinematography that tends to come along with her films. I also love learning from the people that I am lucky enough to work with. I love observing the ways different people look at an idea and then execute it. When I was studying documentary film making, my classmates taught me a lot. My friend Nika had an amazing ability to look at the detail of a shot, as well as the bigger picture. She taught me that the small details are what make the overall outcome.

3) What did you learn from making the film ‘Paper Thin’ ?

During the year of making Paper Thin, which I worked on as the cinematographer, I gained further insight into the strength of the LGBTQ+ community and the positive outcomes of effective activism. The individuals who were sharing their stories had survived extreme acts of discrimination and had made hard journeys to reclaim their lives from the systems that wanted to diminish them. I really looked up to the strength and resilience of them.

4) What message do you think ‘Paper Thin’ has?

I think Victoria (whose story the film tells) shows us the we shouldn’t let systematic oppression kill our spirits and instead fight it. She also teaches us that you should always be your true self and not let anyone else’s expectations of that sway your own truth and dreams.

5) What do you think lacks in society in terms of understanding the LGBTQ community?

I think there is a lot of fear in the world, not only exclusively aimed towards the LGBTQ+ community. I think where there is fear, there is more space for judgment and ill-informed views of something we know little about. I think community plays a vital role in holding space for marginalized groups and intersectional solidarity between these spaces is of great importance. People from all walks of life need to be standing alongside one another. It makes me hopeful to see this happening around the world specifically in times like these, however, there is still a long way to go towards equality for the queer community and within the community itself.

Life In lockdown has been challenging, as we have all experienced. I made the decision to be with my family and friends in my hometown of London. I think the pandemic has uncovered many things about us as individuals and as a society that needs to be mended and healed. It was definitely a time for reflection and gratitude. Moments of solidarity and kindness between neighbors, family and friends who were stuck in their own situation somewhere else in the world made it feel more bearable. It was a very important time to reach out and be there for one another.