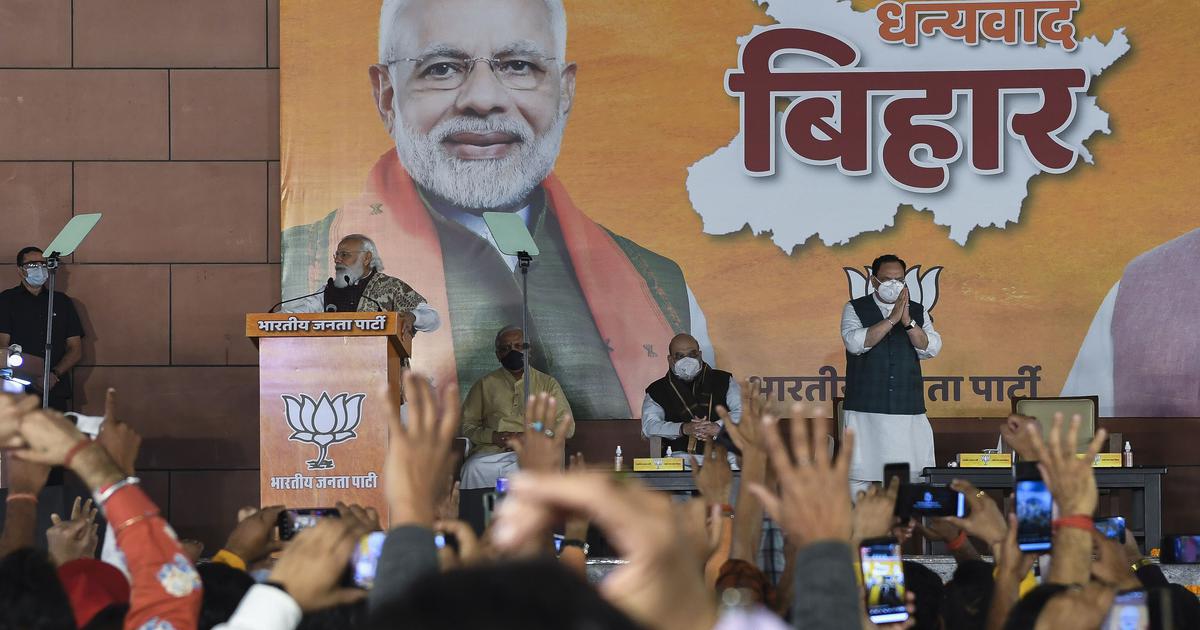 After the results of the Bihar Assembly Election, discussions about the Chief Minister have intensified, even as the opposition parties are constantly accusing the NDA of rigging the counting of votes. It may be recalled that the NDA won 125 seats in the election and managed to get a majority, while the Mahagathbandhan was reduced to 110 seats, but still, the rival RJD-led Mahagathbandhan proved to be a worthy challenger and gave the ruling alliance a tough fight till the end but fell short of the required numbers, So we talk about some of the factors on which NDA won and MGB lost after a very significant performance.

MGB’s credit, the strategy to put unemployment at the heart of its campaign did work in its favor, but still many of the voters voted on development and only 20% of people focused on unemployment, where Tejaswi promised 10 lakh government job at the 1st cabinet, bjp came with 19 lakh jobs, not more details just 19 lakh job promise.

MGB manage to gather a crowd in their rallies but fall a little short to convert that crowd in votes, on other hand BJP led NDA tried everything from corona virus-free vaccine to Nitish Kumar emotional blackmail and that worked for them

Many experts believe that the very main reason MGB has lost this assembly election is because of congress, this close election was just about 10 to 12 seat stake, and if congress performed the same as the last year election then maybe the polls of an election has said the another story. Congress this time contested on 70 seats but ended up with only 25 percent of them this was the major drawback for RJD lead MGB, In comparison, the three left parties registered a combined strike rate of over 55%, more than twice that of the Congress.

3) THE ‘LOSER’ IN THE WINNING ALLIANCE

Among the NDA allies, the JD(U)’s performance was the least impressive as it won just 43 out of the 115 it contested at a strike rate of 35.5%. Consequently, the Nitish Kumar-led party may now have to settle for the role of the “junior partner” in the NDA alliance in Bihar.

The RJD not only emerged as the single largest party but also registered the highest vote share in the state. The Tejashwi Yadav-led party recorded a vote share of 23.03% followed by the BJP which has a vote share of 19.5%. However, the RJD won just one seat more than the BJP at 74. RJD’s higher vote share could also be due to the fact that it contested the most number of seats among the major parties in the state, fielding candidates in 144 constituencies.

The Bihar assembly election was one of the most closely-fought elections seen in recent history. There are were as many as 11 seats where the margin of victory was less than 1,000 votes. Both the BJP and the RJD lost three seats in these tight races. In Hilsa, the winning JD(U) candidate won by a wafer-thin margin of just 12 votes.

Despite many failures of BJP and their MLA’s but still, prime minister Teflon image worked again in Bihar and BJP is now more strong than last assembly election, and Chirag Paswan did a very good job in cutting votes of JDU, where Chirag consider himself with BJP and against JDU, this hate-love relationship of Chirag was a major reason that BJP has very good strike rate in Bihar.

Members of the opposition Mahagathbandhan, including Manoj Jha of the Rashtriya Janata Dal (RJD) and Randeep Singh Surjewala of the Congress, on Tuesday, alleged irregularities in the counting process in seats with tight margins,  Jha alleged that leaders from the ruling Janata Dal (United) and Bharatiya Janata Party (BJP) were “misusing their official power” to delay the handing over of certificates to winning candidates.

Surjewala said that in Kishanganj, the Congress candidate won by 1,266 votes. “Now the Congress candidate is being denied a winning certificate,” he alleged. The clarification came after Rashtriya Janata Dal leader Tejashwi Yadav complained of fraud in the counting process and demanded a recount, flagging narrow margins in 20 seats. The Opposition leader, however, did not specify which 20 seats he was talking about. In the Hilsa constituency, Srinivas said the request for a recount was accepted as the victory margin was only 12 votes and the number of rejected postal ballots was 182. “The returning officer recounted the entire postal ballots including those which were rejected as invalid in Hilsa and passed a reasoned order in this regard,” Srinivas said. He added that the officials rejected the demand for a recount of EVM votes as the returning officer’s counting agents were present at the time and seemed satisfied with the process, according to The Indian Express.

In five other constituencies – Ramgarh, Matihani, Bhorey, Dehri, and Parbatta – the victory margin was more than the rejected postal ballots, Srinivas said, adding that a reasoned order was given by the returning officer in each case. The RJD has said the NDA polled only 37.3% of votes compared to GA’s 32.2%.

​Even a marginal error can affect the outcome, it asserted. RJD spokesperson Chitranjan Gagan said going to court was very much on the table, saying the overall difference in the total votes polled was too thin to be ignored.

SUB ELECTIONS OF OTHER STATES

Besides Bihar, other states where elections will take place are Chhattisgarh, Gujarat, Jharkhand, Haryana, Karnataka, Madhya Pradesh, Manipur, Nagaland, Odisha, Telangana, and Uttar Pradesh. BJP on Tuesday won all the eight assembly seats in Gujarat, The party has also won six out of seven seats in Uttar Pradesh. The remaining one seat has been bagged by Samajwadi Party, BJP was also swept Madhya Pradesh where it was ahead in 19 of 28 constituencies.

Votes were also counted for the by-elections in Manipur (five seats), Haryana (one), Chhattisgarh (one), Jharkhand (two), Karnataka (two), Nagaland (two), Odisha (two), and Telangana (one).