Ryan and Cinthia were so busy with their girls, they didn’t realize that 5 years passed. Their girls had grown. Kids at this age go to the playschool.

Cinthia had a thought of taking both to a play school but Ryan resisted.

“What if they don’t feel well. I mean they are not normal”, he said with a heavy heart.

“Ryan, we should take them to playway, they should live a normal life”. Cinthia told him.

“Well I agree with you, it’s a nice idea. But first, you have to make sure that they like the play way. Because nothing is more important than their happiness”.  His voice was trembling because he knew the world outside won’t understand their pain.

But they took them to the play way and told both of them, ” both of you are just like any other child here. You must go and meet them, we are watching you”.

While Ella and Bella were stepping inside, everyone there was looking a bit surprised. Children ran away and started yelling, “Monsters! Getaway”. Yes, people are so cruel sometimes.

This incident took away their enthusiasm and they denied to go to the playschool.

So Ryan and Cinthia thought of hiring a private teacher for them. But it wasn’t that simple. Everyone would say no. They would say that if something happens to them, who will take the responsibility. A somewhat true fact was the doctor had told them earlier that it’s not normal for the world.

One day, a teacher agreed. Both the girls were so happy that finally there is someone who would teach them.

The teacher was not so friendly and would yell at them everytime they would make a mistake.

One day, in the middle of their way, Ella started crying. She cried so much that she was not a to breathe. Both Ryan and Cinthia panicked. So they call out to the doctor’s office.

As they reached hospital, they found doctor Ray ran to them without a word.

” I had told you both, please make sure this time. Because if one suffers, the other also gonna suffer. I can help you only if we operate. Please decide soon”. She said and took them to ICU.

Finally now it was time for decision, and both of them agreed for the operation.

” Let one of our children live.” Ryan told Dr. Ray and the operation started. 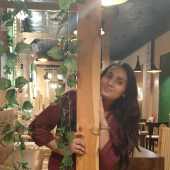 A textile engineer on weekdays whom you can find painting or sketching on weekends. And one who writes anything that comes to her mind. Romancing through poems or terrifying through dark tales or just a philosophy she can simply write about anything, anyone.