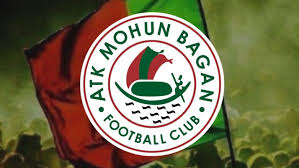 Indian football has very recently witnessed one of the biggest mergers in its history with two biggest clubs from ATK from the Indian Super League and Mohun Bagan from I-league merging together. The merger made the path for Mohun Bagan to enter the ISL in the 2020-21 season and display its excellence in the ISL as well. ATK as we all know is a club owned by Mr. Sanjiv Goenka along with Sourav Ganguly and has done phenomenally well in the ISL. ATK initially was in partnership with the Spanish giants Athletico Madrid and had players like Luis Garcia and Fikru in the first-ever ISL tournament. Both the clubs are considered to be the best in the business and such a merger has no doubt excited the fans as well as upsetting a few too. The East Bengal FC fans who followed ATK in ISL were very unhappy with the current merger and showcased the same through their twitter handles.

The club owner has decided to keep the traditional green and maroon colours of Mohun Bagan intact along with a minor change to its logo with the iconic Pal Tola Nauka. Although 80% of Mohun Bagan’s stake has been bought by the Sanjiv Goenka Group, and just 20% stakes still with Mohun Bagan yet the decisive  move to keep the legacy of Mohun Bagan alive is highly appreciated.  The club had registered itself as ATK MOHUN BAGAN PVT LTD with the names of Sanjiv Goenka, Sourav Ganguly, Srinjoy Bose, Debashish Dutta and Sanjeev Mehra as the board members of the Club. The club will be taking part in ISL along with Calcutta Football League, the club will also take part in AFC 2021 where the slot is offered to Mohun Bagan for their Champion Status in 2019 I-league season. “ATK have bought in maximum shares in Mohun Bagan because of their history, legacy and fan following across the world. Otherwise, they have no asset,” tweeted Baichung Bhutia after the merger was announced. The Mohun Bagan Legend also added that “These are not clubs, this is their identity. You are either born East Bengal or Mohun Bagan,” while addressing the backlash the merger has been facing from the East Bengal fans who also followed ATK. The Board had its first meeting this Friday and the decision regarding the Clubs name, Logo and Colours were taken in the same. In the press release the Club also announced about the Infrastructural development that has been planned to enhance and improve the football structure. There were takeaway points from the press release-

Corporate mergers is nothing new in the global football but having been able to witness something similar in India is a positive sign as it will not only help both the Clubs merged to gain more followers but the change in the scenario of Indian Football is also evident as both the clubs have been the giants in their respective leagues. Although when we talk about the legacy and history of the club its ATK who has come as a winner with only 6 years of existence it has managed to merge with a club that is 131 years old. However, it would be difficult to say how the fans will fare with the merger and only time will decide how the club fares in the competitive Indian Super League which has in a mere six-year span proved its worth in Indian Football, which is evident with the level of National team performance and the presence of ISL players in the Indian Team.