A PLACE THAT LEFT ME A BELIEVER – AADI HIMANI CHAMUNDA TREK

That’s my inspiration for a whole lot of years to explore mountains and it was my inspiration back then when I decided to go on Aadi Himani Chamunda trek. We were 12 people who decided to go on that trek but in the end, when we reach the base, we were only 4. Certainly, for something that demands dedication, not all the people stay. So let me tell you my story and the stories mountains tell me.

As per locals goddess, Chamunda killed two demons Chand and Mund from the top of the mountain by throwing huge boulders on them, one can still find one of the boulders above the Shiva Temple located near the existing Chamunda Devi Temple on Dharamshala Palampur state highway. The recent temple build in the past decade was destroyed by the fierce fire in 2014 and now it has been under reconstruction again with the help of devotees.

It was a 14 km trek. We started our journey from Jia Valley. While climbing the first mountain, which was somewhat difficult for us, we were startled by the beauty of those mountains. Every step was difficult after an hour but we were looking for a place near a source of water to camp as there are very few water sources on that trek. After 5 km, we found a good camping location with a water pipeline nearby. We started setting our tent and a bonfire. We met people who were coming down from the top. They were our friends. We started singing and dancing around those big flames which seemed to be our only hope for joy at that time. You see, just when the sun goes down, a fear uprises in your heart. A fear of losing, a fear of darkness, and certainly a fear of death. And amid that, we were proudly living that moment just thinking about the cosmic heaven above and the people around. So if you ask me, I know exactly what living in the moment feels like.

The Sun rose with a new hope for us and brought a new challenge. The water pipeline near which we were camping, broke from somewhere in the jungle. Now we were standing there thinking about trekking the rest of the mountains with just a liter of water. That’s one thing mountains taught me. Life is never going to be the way you planned it to be. It’s not just unfair to you but to all. Now you can decide whether you want to stay there or climb up. Thanks for the night we made some good friends. They gave us a 2-liter water bottle and we started again.

Mountains were getting steeper. All I could hear at that time was that I was gasping. Loud! Hitting one step closer to our destination was making us feel a little better. But now, that mountain was not looking so beautiful. With very less water and energy, we were losing. Again, mountains told me that something that’s very beautiful can appear to be very harsh. And then, the thing we were hoping not to happen, happened. We were 2 km away from the peak and all the water we had, finished. We were sitting on a rock gazing at the peak with the daunting sun over our head which was heartwarming last evening. Vision was getting blur and we thought that’s the end. But as they say, just when you are about to lose all your hopes, if you stay for a while, divine will set free all its grace upon you. Some people showed upcoming downwards from the peak. They gave us a water bottle. And just then, for the first time in my life, I experienced the utmost feeling of gratitude towards someone. We built our minds and after an hour, we reached the top.

We made our prayers to the divine which helped us complete the journey, which seemed to be impossible a few hours ago. We drank the fresh cold water from the melted snow of the glacier.

Now, we were standing at the top of the mountain looking at clear blue sky and mountains. A gentle breeze was flowing, touching my face and the sun warming my soul as if they were saying to me to stop here for ever. My heart was overwhelmed by the feeling of love and gratitude. I was sitting in the lap of the divine. That place made me a believer for life.

Thankyou all for reading! 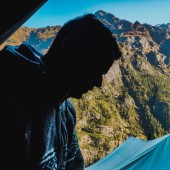 Engineer | Wanderer | Listener I will tell you all the stories mountains tell me.

What Can You Predict? – Kareri Lake Trek